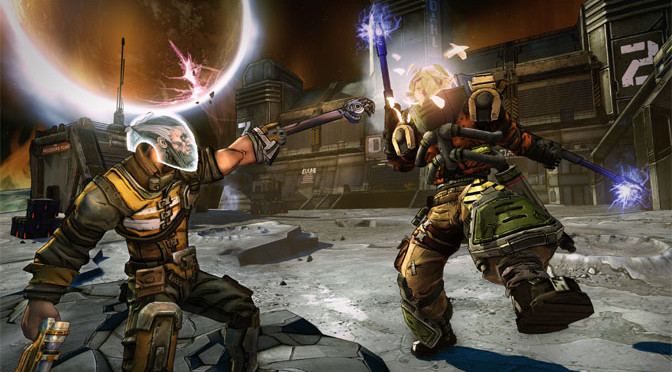 When the first Borderlands game released in 2009, it was something of a revelation. Dubbed a “role-playing shooter,” the game had everything a new IP should. It offered a novel style of gameplay with exquisite polish, beautiful graphics and a fully imagined world rife with content. Gearbox Software followed up their initial success with an even better sequel, with Borderlands 2 fine-tuning the gameplay and making general improvements to the game’s mechanics. Storytelling improved dramatically and saw the writers take the absurd comedy to a new level, with tons of laugh-out-loud moments and myriad pop culture references.

And then came Borderlands: The Pre-Sequel, a partially tongue-in-cheek, partially accurate name for the latest entry in the series. The developers at Gearbox and 2K Australia, who took on some duties developing the game, said from the get-go that this isn’t Borderlands 3.

And that’s really what tells the story of The Pre-Sequel: It’s a great game, replete with the charm and superb design of the prior two Borderlands, but it feels a bit stale. There are a handful of factors that work against it, including the timing of its release.

Buy Borderlands: The Pre-Sequel At Amazon!

One of the issues plaguing the game is that it doesn’t feature any earth-shattering improvements. The game almost feels like a massive, brilliantly crafted expansion for Borderlands 2. That’s not to say it’s lacking content; The Pre-Sequel may end up being a larger game than its predecessor once all the expansions have released. But it’s impossible to deny that it feels and plays exactly like the second game, albeit with some minor changes.

The Pre-Sequel is set on Elpis, Pandora’s moon, which doesn’t contain a breathable atmosphere. All of the characters– with the notable exception of Claptrap – need O2, or “Oz” kits, to breathe.

While traversing the harsh, nigh-inhospitable lunar environments, the Oz kits allow players to venture away from artificial atmospheres and oxygen vents in relative comfort. Of course, a regular oxygen mask would be mundane and highly predictable, so the developers added a few tricks to the new items, including the ability to ground slam anything unfortunate enough to venture underneath your low-gravity-enhanced jumps.

Additional breathing time, explosions while ground pounding and numerous other upgrades make Oz kits one of the game’s standout features while also adding even more punch to The Pre-Sequel’s massive arsenal.

A new class of weapons – lasers – afford players another method of annihilating enemies. Fast-firing with a high elemental-effect chance, this new weapon class has the ability to alter any fire fight. To balance out their tremendous firepower, laser weapons chew threw ammo like a plague of locusts swarming a farm, making them best used in critical moments.

The Pre-Sequel complements the new weapon type with the addition of the cryo element, letting players freeze enemies solid and shatter them. The new features in the Pre-Sequel all synergize nicely, making it possible to ice over a few enemies with a cryo-infused laser gun and then shatter them with a well-placed ground slam.

But there are times when a ground slam simply won’t do the trick, and The Pre-Sequel addresses that with a brilliant, diverse array of skills for each character. Building characters tailored to different gameplay styles is one of the features that makes the Borderlands series so addictive, and getting to experiment with each of the new characters’ skill trees is, pun fully intended, a real blast.

While there are the usual passive skills that enhance basic gunplay, the Pre-Sequel boasts abilities that make the prior two games look tame by comparison. For instance, one of Claptrap’s higher-level skills allows him to transform into a pirate ship, replete with cannons to decimate everything in his way.

Yet for all of its usual polish and new additions, the Pre-Sequel really isn’t Borderlands 3. There are still some minor issues that haven’t been addressed, particularly in the game’s pacing. Large swathes of the early story are gofer missions, which see players trek across treacherous lunarscapes that often prove more deadly than any of the Pre-Sequel’s nemeses.

And then there’s the still-pesky pet peeve of not automatically picking up ammo when opening a chest. It’s only a minor issue, but it stands out all the more because the rest of the game is so well-made.

Perhaps the most glaring snag that Borderlands: The Pre-Sequel hits isn’t actually any fault of the game itself. With the game releasing on the Xbox 360 and Playstation 3 at the end of their respective cycles, it landed at a time when gamers began adopting next gen hardware. It’s still a ton of fun, but the inevitable question of, “What if I were playing this on Xbox One?” kept popping into my mind.

To be fair, every “issue” The Pre-Sequel has is minor, and it’s a testament to the developers and series as a whole that the only reason any minor blemishes stand out is due to the franchise’s superb quality.

Borderlands: The Pre-Sequel doesn’t do anything to revolutionize the series, instead opting to make small improvements. At the same time, if it’s not broken, why bother fixing it? It gets 4 GiN Gems out of 5.