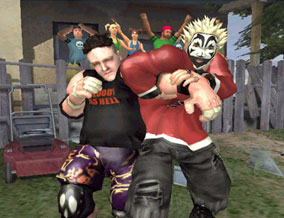 Backyard Wrestling 2: There
Goes the Neighborhood

Eidos and Paradox Development take another stab at a sequel to last year’s "Back Yard Wrestling" grappler which received somewhat of a mixed bag of "welcome" from the gaming community. After an overall lukewarm reception they went back to the drawing board and re-tweaked the game based off the "likes" and "dislikes" of gamefans and wrestling enthusiasts round the globe. Now ready to enter the squared circle once again the Eidos and Paradaox "tag-team" presents us with "Back Yard Wrestling 2: There goes the Neighborhood."

BYW2 dramatically raises the bar over last years predecessor packing tons more action and excitement, new moves, extra features, more interactive environments, and a pretty nice "face lift" in the graphics department. New to the ring this year is a beefed-up hybrid "wrestling-slash-fighting" system which now includes submission holds, new counters, and blocking along with fully interactive environments where anything you break can possibly become a weapon, and a pretty respectable character customization mode.

All your favorite hardcore wrestlers and some new ones are back like "New Jack," "Sick Nick," "Supreme," "Vampiro," "Ruckus," and "Violent J," each gracing the scene decked out in their new gear and ready for action.

If by chance, one isn’t familiar with the wrestlers of the back yard federation, the "media room" mode is packed with plenty of real-life footage displaying all the big names of the business in action. In fact, I recommend viewing the media mode before you even play the game, regardless of whether you’re up to date on the wrestler’s profiles or not, simply because it gets the adrenaline pumping and helps set the tone for the game.

With so many new features added into the mix the combat is pretty intense and no match is fought quite in the same way. You can daze your opponent with a melee of fast punch and kick combos or systematically decimate them with a series of clever grapple attacks or submission moves. Each time you successfully land a punch or kick or pull off a successful grapple move your "Turbo Meter" will build up. When you’re Turbo Meter reaches full you’ll gain access to your wrestler’s "Super Move" to either knock out or deal massive amounts of damage to your opponent in the process.

It’s not all about offense in this game either. A major key in coming out on top in a match lies in how well you can defend yourself. Make use of the "block" technique to fend off your opponent’s melee attacks. Simultaneously pressing the

Environments should play a big party in your overall strategy so take out time to get to know each arena well. Nearly everything in a level can be broken using slams, irish whips, and generally just knocking your opponent into objects. The breakable objects will leave debris on the ground. The larger pieces can then be picked up and used as weapons.

Anything including chairs, barrels, boards, tires, and even office equipment can become fair game at anytime during a match. You can score additional damage by using various hazardous materials such as fire to light weapons of choice such as boards and then bashing them over the head of your opponent.

Some arenas have interactive crowds in which you can push your opponent into and have them shoved back toward you in a vulnerable state for additional attacks. Alternatively, you can irish whip your opponent into a crowd member and the spectator will hold onto them allowing you a couple of free cheap shots and attacks.

You can deliver flying attacks off various platforms around the arena to help beef up your aerial assault. When an opponent gets close your wrestler will go into a "jump stance." Press the corresponding button to deliver a lethal air attack. If you find yourself battling it out on the same platform with your opponent, try and bait them near the ledge of the platform to either throw them off or grapple them and perform a "Big Slam" off the ledge for some serious damage.

To top the action all off you can perform "Enviro-mental Throws" if you find yourself in the right place at the right time. Enviro-mental throws are special interactions available when you have your opponent in the front grapple position. A special indicator signals when the throw is available. When the indicator appears press the corresponding button to initiate an insane power move.

User-friendly controls put the icing on the cake for this wild grappler. Just about every attack, action, or grapple move in the game can be performed almost instantly via a one or two button combination along with the use of the directional pad. It takes hardly anytime at all to get a feel for the controls and begin to take full advantage of all the features the game has to offer.

Add to that some great music treks, an arsenal of unlockable video trailers, and even a handful of hidden characters to bring the headcount to at least 30 wrestlers, and you’ve got yourself a pretty solid wrestler.

The bottom line is Backyard Wrestling 2 delivers the goods when it comes to overall presentation and it looks like Paradox Development and company are headed in the right direction as far as this unique genre of wrestling goes. While it’s not the strongest grappler I’ve ever played, I do give this one an "above average" thumb’s up. I recommend this title to any true wrestling enthusiasts out there and to those who really enjoyed the "Def Jam" wrestling series. This one gets a very solid 3 + Gin gems.