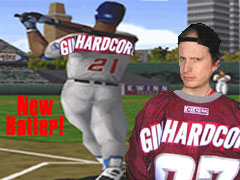 While I am writing this commentary, I am saddened at the news I heard earlier today. Though it has been expected for quite some time now, it was announced that the NHL has officially cancelled the entire 2004-05 season. I knew it was going to happen, but I always had some hope that the owners and the player's union would be able to make an agreement. Guess I was wrong.

Now that the NHL season has been cancelled, I am now left with a sports drought. With the football season now over (not before I made another successful prediction of a Patriots victory, with the Eugene Wilson injury as a bonus), all that is left for me is the NBA, and a weekly NASCAR event. (I don't really follow college basketball that much, so I don't count it.) That leaves me with a little less than two months until the start of baseball season.

At least one month before the real baseball season begins, the 2005 baseball video game competition will begin, but it will be the last time it happens. Following up on EA Sports' recent exclusivity rights over the National Football League and the NFLPA, Take 2 Interactive (under its new 2K Games label), fought back with their "near exclusive" acquisition of Major League Baseball, the Players Association, and Major League Baseball Advanced Media (MLBAM). However, after this year's release 2K Games will be losing something else: the ESPN moniker, which has also been acquired by EA Games.

A few months ago, I recommended to Take 2 that they do this. While last year's version was a tad on the disappointing side, I was always more partial to the Major League Baseball franchise. Even with EA improving their record with the release of MVP Baseball, I always had trouble hitting with MVP, and felt more at home with MLB, which always felt more like one of my all time favorite baseball franchises: High Heat.

But sadly, High Heat will never see the light of day again. After high hopes involving Microsoft buying the High Heat franchise, those hopes faded when Microsoft admitted they were leaving the sports game market.

Just these last few months alone we have seen a battle in exclusive rights to each sports franchise. But it has not only been in the game market, but also on another market that I follow strongly: satellite radio.

I have mentioned in the past how I chose SIRIUS because of its stronger sports lineup, which includes an exclusive deal with the NFL, as well as agreements with the NBA, the NHL (whenever the season starts again), select college sports teams, and even English Premier Soccer. Until recently, the only exclusive that XM had was NASCAR, but they recently added a multi-year deal with Major League Baseball.

I know a lot of XM fanatics (including our publisher Nate Wooley, also a baseball enthusiast), will torment me about how I won't be able to listen to baseball games. To them, I say: B.S.

Nonetheless, if you look at the end result, it seems as if EA is in ties with SIRIUS about their exclusives: the NFL and English Premier Soccer (as part of the FIFA license), and XM is in affiliation with 2K Games with their MLB license. NASCAR still doesn't fit in though as it is exclusive to EA Sports. Shouldn't that make them affiliated with SIRIUS as well? Sadly no, as XM has their license.

However, if EA does get exclusives with both the NBA and the NHL as well, it would fit my SIRIUS theory.

MOST WANTED: Gran Turismo 4 (unless Sony delays the Tuesday launch"AGAIN!)