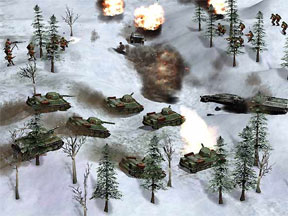 When I was first exposed to the Axis and Allies board game from Milton Bradley, I was instantly hooked. Of course being in middle school at the time meant that I had a lot of free time, so many neighborhood tournaments were held in my basement and I spent hours upon hours looking at a fully set-up board plotting all the best opening moves for each of the five player positions. (England, The United States, Russia, Germany and Japan)

Years later I told my wife how fond I was of the old game, and she being the great person that she is, bought it for me for Christmas one year. Sadly, it has stayed in the box for quite sometime now. Finding four other players willing to invest an hour setting up the board and at least five hours playing is much more challenging than it was when I was a carefree child.

When Atari first came out with the Axis and Allies computer game, I was quite happy. It was a more or less direct translation of the board game. It was extremely buggy to the point that you could not even land planes onto aircraft carriers, but after a few patches it worked well enough. And having the computer run all the backend aspects of the game, not to mention setting everything up and eliminating the need to cleanup when finished, was a godsend.

My only real complaint with the game in that form was that it was not much to look at. Graphics were a bit dull, without any of today’s pizzazz, which is standard fare now.

So when I saw that Timegate was making a new Axis and Allies that was being published by Atari, I was highly interested given my history with the game. And while the finished product this time around is a good title, I can’t help but think that the target audience is probably a lot like me, and will likely be somewhat disappointed with this version.

Let me get to the main point. This version of Axis and Allies is a real-time strategy game. There are turn-based elements like when you are planning attacks on the main map screen. But whenever armies meet, you drop into a turn-based interface. And whoever wins that turn-based battle, gets that piece of the map.

This is not unlike Rise of Nations from Microsoft, or a few other games that use this interface. It’s clever and can be a lot of fun. But it might not be what you are expecting.

The strategic map does have a lot to do with the real-time game. If you move an expensive armor division onto a square to fight, then you will be able to build an armor division HQ during that battle. If you only move in with infantry, then that is all you can build. But generally, the game is won and lost in the real-time battles.

I have two main problems with this type of interface, especially in a game where you are not harvesting resources and tying to buff your technology levels to gain an advantage over your opponent. Here, other than the restrictions based on the type of army you move into an area, you have an essentially equal army to your opposition.

First, this means that if you get good at the RTS interface, then you don’t really need to concentrate much on the strategic aspect of the map. Go ahead and move a single infantry division to attack a map square held by a mechanized and an armor division. If you are really good at the RTS side, you will be able to beat them. There is also the flip side of this that if you are terrible at combating the tank-rushing tactics of an RTS, you are going to get mauled by the computer every time no matter how good you are at planning on the strategic map.

And secondly, the game can get a bit repetitive. I like RTS games, but don’t really feel like fighting seventy similar battles in a row to try and conquer the world.

Now, if you never played Axis and Allies before in either its original board game format or the first computer game based on it, then you might enjoy this game a lot more. The graphics are unbelievably good. Its fun to just explore the picturesque countryside and great to watch your opponent’s vehicles and bunkers explode if they get in your way.

To add to the replay value, there is an excellent story-driven set of missions you can follow. Part of this is a tutorial that teaches you the game, but quickly ramps up to giving you full access to all units and tactics. You will be using your navy and air forces in no time. And there is nothing better than planning a bombing run to shatter your opponents just before your main attack – a tactic you will likely want to learn early on.

Each nation also has a special unit or advantage that sets it apart from the others, if only a bit. And each battle is led by a commander that can employ special tactics like carpet bombing or emergency supply drops. This also helps to shake up the action a bit.

Apparently this game is based on, or inspired by, the original board game. If you want an exact copy of Axis and Allies, then you can probably find the original computer title for a couple of bucks online now. But if you want a spiffy new World War II game with the action of an RTS, then this new Axis and Allies title is right up your alley.