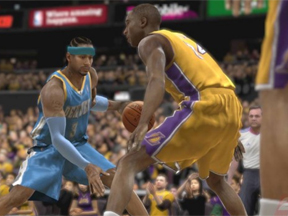 I HATED NBA 2K10! While I’ve always favored the NBA 2K franchise over the former NBA Live franchise owned by Electronic Arts, last year’s game was a major disappointment. For the longest time I have complained about the difficult shooting mechanics, as well as the terrible passing mechanic that always ended up in too many steals. And then there was the My Player mode. While the addition was a nice idea on paper, the overall execution was terrible. The rating system was way too strict, and any mistake kept your player stuck in the NBA D-League.

But despite my anger towards the game, there was potential. Not just in the My Player mode, but also in the NBA Today feature, where the game starts up with all the actual games that the NBA was playing on that set day, but featuring commentary that mentioned past games in great detail, as well as upcoming matchups right down to the game’s start time. It was impressive to look at.

And that’s where we are with NBA 2K11. Right off the bat 2K11 had a lot to prove, as they were supposed to go head to head with EA’s NBA reboot called Elite. However due to a critical glitch leading to a viral YouTube video, Elite has been cancelled, thereby making NBA 2K11 the exclusive NBA game this year.

It didn’t hurt 2K to get Michael Jordan on the cover as well. What used to be a cover start for EA’s games is now working for 2K as they didn’t just use him as the cover athlete, but also included a Jordan Challenge mode, which consists of ten of His Airness’ greatest games which must be completed in the same way, or better than, what number 23 did for real. Rewards come in the form of new Air Jordan shoes to be used by your My Player character.

And speaking of My Player, I am happy to say the mode has been improved significantly. It almost feels like Visual Concepts took the advice I gave them with MLB 2K10 and put it in MLB. Now I can finally see how close I am to playing in the NBA and also provides tons of methods to build up my player’s stats. Sure they haven’t gone as far as I did in MLB so far, but NBA’s game take much longer to play as opposed to MLB, which I can finish in a matter of minutes.

One of my biggest criticisms of the previous My Player is how difficult it was to get a high rating for each game. Every time I either made a bad pass or allowed my matchup to score, my rating went down significantly. Thankfully that has been for the most part resolved. However there are some moments when I am left scratching my head. My team is down by three, and as a shooting guard I am beyond the arc with a wide open opportunity. I take the shot, but it doesn’t go in. What is the result for this play? "Bad Shot Selection." What? Sometimes it makes no sense at all, but thankfully it didn’t get way too frustrating after a while, and unlike last year when I was stuck with the Tulsa 66ers of the NBA D-League, this year I can quote Lebron James and "take my talents to South Beach" and play for the Miami Heat, which ironically is doing a lot better than the real Heat are.

Each game also ends with a press conference where my player is allowed to give his opinion on each game with choices of whether to answer with loyal, arrogance, or passively. The choice can affect your position with your teammates, fans, and the league in general. Eventually your player can even be able to pick up endorsements as well. It is much improved over 2K10, but still needs a bit more improvement.

But what really impressed me the most this year is the improvements over the previous NBA Today mode. Taking the idea of allowing play of the actual games that are taking place on the day in question, it shows the whole experience during the game itself. Play a game on a holiday such as Thanksgiving or Christmas, the graphics will reflect that. Got a critical matchup coming up? The game will feature an actual between period promo that will highlight it. After each game, the whole Player of the Game moment is not just stats, but actually shows the gameplay in action with the stats running in the background. It is absolutely gorgeous.

As is the rest of the game, it looks stunning. Runs fast and is quite responsive. Some people have complained that some players such as Kobe Bryant don’t look right, but I haven’t seen it myself. The horrid slowdown that plagued My Player in 2K10 is also gone.

Sound is also excellent, with the play by play team of Kenny Harlan and Clark Kellogg giving tons of detail that is rarely seen in a sports game, once again taking advantage of the NBA Today feature and talking about past and upcoming games. Doris Burke replaces Cheryl Miller as the sideline reporter and despite the usual sideline banter, still sounds interesting at times. I just wish that her big head would stop popping out of the score display whenever she is on.

But still there are some issues I wish 2K will work on. As always, the passing is very loose. I don’t understand why it is that I have a teammate next to me, but my player has to throw a touchdown pass down the court, leading to an easy turnover. The computer steals way too much, and yes I know that 2K wanted to make the game as realistic as possible, but at times it’s just too ridiculous. Same goes for the shooting. Thankfully 2K made an option to allow shooting to be based solely on stats and not on the timing of the shot stick, but it’s still very tough. Once again, adjusting the sliders helped in Association mode but didn’t do anything for My Player mode.

Needless to say, this was 2K’s golden opportunity to win the NBA fans over after Elite’s cancellation, and for the most part, it’s a success. NBA 2K11 is a vast improvement over 2K10. There is still a lot of work to be done but so far the series is looking pretty good. It looks like EA has a lot to make up for this year if they are ever to catch up to 2K Sports.

Maybe 2K should claim NBA exclusivity in the same way they claimed the MLB.

Pros: Vastly improved over NBA 2K10. My Player is much more lenient. NBA Today 2.0 is a sight to behold, even when simulating games. Jordan mode highlights the best moment’s of 23’s career.

Cons: Passing is STILL a pain, and results in way too many steals. Shooting is still very difficult. Some graphic glitches. AI issues are still prevalent. Why is a three point shot by a shooting guard when down by 3 a "bad shot selection?"