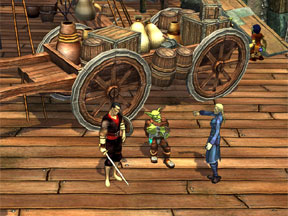 Silverfall is an appropriate name for this Diablo-like RPG, because while there are many good things that make it shine like silver, there are also a painful amount of bad elements that make the title fall. Depending on your play style and what you think is important in an RPG, you will either love this one or loathe it.

The first thing you will likely notice when loading up the game are the graphics, which is really a high point. The game is not only gorgeous (name a game that isn’t these days) but also has its own style that really sets it apart from just about everything else on the market. And that is something you don’t see every day.

The Silverfall world seems to combine a comic book type style with a sort of hyper realism. The secret is that while you think the game is done with cel-shading, it actually only mocks this style, and does it whenever it wants for maximum effect. So the characters are highly detailed and each time you find a new piece of armor or a weapon, their appearance changes to reflect this, which is not always the case in a top-down view type of interface. This leads to a lot of "oh, look at my new Indy hat" type of moments when you sit back and admire your new outfit. Characters also have a little black outline around them to really mimic the comic book setting. However, if you find that to be a bit much, you can disable that in the options settings.

And because the world is not really cel-shaded, the developers can choose to break away from that whenever they like, such as when your characters are sloshing through water. Here you can see real-time reflections and waves, like you would expect to in a 3D type of game. The two techniques combine to form a unique and graphically stellar world, whereas a purely cel-shaded game world like, say XIII, kind of breaks down when you are looking at a panorama.

But it’s not just the graphical technique that is impressive, but the detail that went into creating the world. In cities you will notice things like nails in boards, ropes lying around, various bits of trash and other little things that make the landscape seem realistic. The artists should really be proud of their accomplishments in making Silverfall really standout.

Like the graphics, the game world is also quite impressive. It reminds me a lot of Arcanum: Of Steamworks and Magick Obscura only instead of science and magic at odds with one another, here it is science and nature. Both paths are accessible to players but as you go down one, you shut off possibilities of the other. So a technology-driven character might be able to use steam-powered armor and rifles, but could not use enhanced staffs imbued with nature’s fury. Oddly enough, magic is actually a third power in the game and does not seem to conflict with either science or nature. So you can be a shotgun toting scientist and still be able to cast fireballs and lightning bolts at your enemies.

The plot of the game is that your home city of Silverfall has been overrun by monsters. You need to liberate your home town, plus find out why the monsters did what they did and end their evil ways once and for all.

There are no character classes. Instead each time you level up you can spend four attribute points raising your base stats and also four skill points buying new spells and abilities. The only caveat is that you need to make sure you are putting points into something you can use and not loading up on scientific skills if you plan to follow the path of nature for example. Thankfully you can change your skills out if you find a re-trainer. It will cost you some gold, but that is a lot better than being stuck with points in a skill that you thought was cool at first, but which turned out to be not very useful for your character type.

Which brings me to my first criticism of the game. Gameplay is really unbalanced towards certain character classes. If you try to be a melee fighter out of the gate, you are in for a rough ride. All the enemies throughout the game are more or less evenly matched with your character in terms of level (more on this later) and there are almost always mobs of them attacking at the same time. So you will get slaughtered if you go this route. Eventually there are some nature powers that let you transform into various kick-butt forms like a werewolf, but early on, it’s just you and your sword arm against unlimited bad guys. Ranged characters are a lot more effective if you can keep people at bay with knockback or ability draining shots. And magic-using characters will find it fairly easy to scorch, freeze or zap opponents.

And as the dominos start to fall on Silverfall, one bad thing leads to another. One of the reasons the characters are so unbalanced is the layout of the world. You start out with undead and other unsavory creatures surrounding your camp. You have to venture into the swamps and fight them, or fight through them to get to other places. You will notice that they all seem to be your exact level, or perhaps a little higher, which is easy to see because their level is printed beside their monster name, which hovers over them. And if you think you will eventually become better than the monsters, think again. Monsters level up with your character. So if you are fighting around your camp and killing a bunch of level 3 zombies and go up a level, when you come back the same monsters will likely be level 4, just like you. Different areas have different level caps, but within that limit all the creatures pretty much will match your skills. This means you never really get the satisfaction of leveling up since the monsters follow your advancement.

When you die, which will happen a lot at first, your body drops and you respawn back at your last camp wearing nothing but your underwear. You have to then make your way back to your body to retrieve your stuff. This is pretty ridiculous in a single player game and might be impossible depending on what killed you. It’s not like you are going to be BETTER when stripped of all your armor and weapons. You can buy insurance from a little goblin to resurrect you with all your stuff should you die, but these costs go up as you do, so it can get to be very expensive.

I am not sure, but it almost seems to me like Silverfall was designed to be a massively multiplayer title and was then refitted to become a single player experience. With groups or mobs of monsters hanging out all over the place and players grinding their way up to new levels, you really will feel like you are in an MMO. And doing the "run for the body" thing does not help dispel this illusion.

But the biggest problem is the control scheme. The map interface is the worst I have ever experienced. Instead of having the mini-map face the direction your character is looking, it follows your rotatable camera view. So if your character is facing north but your view camera is looking back at him (facing south) then clicking what you think is forward in the direction of a quest will actually make you turn around and run the other way. And with monsters all around, this means running into mobs of beasts that will go aggressive on you instantly and have to be fought, even though you could have avoided them. Also, when you bring up the full size map, you are shown little Xs to show quest locations, but most of the time they are at the edge of a territory, so you don’t know how far you really are from your destination, or even where the territory ends until you get close to the server line.

Server line you say? Yes, further backing my theory that this is an MMO scaled down for single play, there are zones in the game. When you approach the end of a zone the world turns purple and when you actually touch the line it asks if you want to continue to the next area. If you do, it will load the new zone, just like in most MMOs. And no, monsters can’t cross zone lines so if you are being chased, you can just step over the line to get away.

Silverfall is not a bad game. To describe it accurately I would say that it is a good game where the developers made some rather bad interface and gameplay choices. If you like online types of games like Ultima Online where you just kind of just explore and fight, then Silverfall will keep you happy. And the graphics are truly amazing and highly detailed. If however you get bored with repetitive gameplay or are easily frustrated when you first start playing, then Siverfall might not be right for you. It earns a middle-of the road 3 GiN Gems, though note that it scored a perfect 5 for graphics and a low 2 for gameplay.

One more note of caution. If you want to give Silverfall a try, be sure to buy the actual boxed game. You can do so from the Amazon link at the top right of this page. The version we tested was downloaded and even though several patches have been released for the game since its launch, none of them work as of this writing with the downloaded version. The download version also puts a lot of files (over 6Gs) into a Silverfall install folder and then installs the game into a separate one that is over 8Gs. But the install program does not bother to erase the 6G file, which it no longer needs. So it eats up a lot of space unless you go hunting for it and delete it manually. It’s better all around for this one just to have the install DVD.