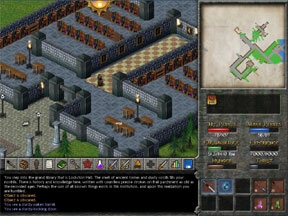 Once upon a time…computer role-playing games ruled the land. And players, myself included, flocked to them. And everyone knew what a CRPG was too. It was a world with a top-down view, a fantastic storyline, and huge amounts of character depth. I know people who almost failed classes in college because they were too addicted to this type of gaming. It was a world that was easy to get lost in.

Today, computers do a lot of the thinking for us. I wouldn’t ever knock a title like Oblivion with its incredibly beautiful landscapes, but they don’t leave a whole lot of room for the imagination. Old school RPGs were kind of like an extension of reading a great book, where you can really get into the plot, but also get to add a bit of your own personality and tastes to the mix. They let you daydream and fill in the blanks of the world around you in the game, sort of like how everyone imagines their raft in the Adventures of Huckleberry Finn book would look like. They are all basically the same, but slightly different in each person’s mind.

The first CRPG that I really got into was called The Summoning back in 1992. By then the writing was on the wall for the genre, as Eye of the Beholder showed us what a 3D world might look like in RPGs. But the pinnacle of the old school trend had to be in 1998 when Baldur’s Gate was released. It was truly epic, with many fans still playing it to this day, and lots of games like Neverwinter Nights trying to mimic it. But Baldur’s Gate pretty much was the best of the bunch for that type of gaming, and not very much has come out in that spirit since then. It’s been a long dry spell.

Enter Eschalon. I don’t know how I somehow missed the first book, but was able to jump in feet first with Book 2, which has just been released. You can download a copy of the game directly from developer Basilisk Games at www.basiliskgames.com which will let you play for a while before being asked to register the title. Registration is $24.95 and is worth every penny. Our scoring system only goes up to 5 GiN Gems in each category, but if I could, I would give them a 6 for value. And no, you don’t have to have played the first book to enjoy the second one. Something apparently happens in Book 1 that causes you to lose your memory, so they can start you out again as a level one person in the class of your choice. And it seems like something similar happens at the end of Book 2, so I would expect the same thing whenever Book 3 comes out.

A key to any old school RPG is character development, and Eschalon really shines here. There are a bunch of different skills to put points into, as well as attributes, so you can make a character that really speaks to your tastes and play style. Whether you want to create a sneaky thief, an agile bow-mastering ranger, an intelligent mage, a brawny fighter, a wild barbarian, a wise monk or a jack of all trades, the game lets you do it. Of course some builds are a lot better than others, but you’ll have to find out that for yourself.

The game doesn’t have an actual difficulty setting, which I thought was a bit of a negative, but you can make things harder or easier by changing a few core rules. For example, you can make it so your character has to eat food and drink water to survive, or change whether equipment degrades over time. This changes the gameplay and affects your final game ranking (your score) which is nice, but I would prefer being able to tone down monsters or increase their numbers to have a direct affect on how hard the game becomes. A few non-combat oriented characters I tested out (like an alchemist) got stuck where they couldn’t really continue. Everything behind them was dead, all quests were solved and XP earned, yet the area in front was filled with creatures too difficult to defeat. Some type of a difficulty slider bar might be a nice addition to Book 3.

The actual game interface is just about perfect. In a lot of ways it follows the old Rogue or NetHack type of rules, where you take one step and the monsters then take one step. So if you get ambushed, you don’t have to pause the game to think. You simply stand still and the game will be paused. It’s a bit more complicated than that though. Creatures and your character move based on your speed score. So you might take two steps to a monster’s one step, or they might be as fast or faster than you, though for the most part they were the same speed or slower. And you can increase your steps with things like a haste spell, which I used to retreat from battle more than once. This interface is the best of both worlds because it gives you the thrill of real-time play with the strategy of turn-based play.

Combat is done very simply. When you get beside a hostile creature (or when you are in range for bows, thrown weapons or spells) you simply hover your mouse over an enemy. It will change to a sword icon and you click to attack. If you have a special ability readied, like the ability to break armor with a blunt weapon, you will see an icon in your status bar to indicate that it’s charged. Holding down the left shift and clicking to attack will activate the special ability instead of a normal attack. Along those same lines, right clicking will cast the readied enchantment instead of an attack, be it an offensive spell like a fireball or simply a combat buff you think you might need. Almost anyone can figure out the interface with or without any previous RPG experience.

And that’s a good thing, because the game does a really poor job of explaining all the rules to players. As an example, I was playing a character I saw as a kind of rogue/mage. So I equipped light armor and wanted to cast spells in battle. But when an enemy appeared, I was suddenly told "Your current strength only allows you to carry X pounds in your weapon, gauntlet and shield slots and still cast spells in combat. This restriction only applies in combat." Well, nice to let me know that ahead of time. My build was pretty much ruined, at least unless I got my strength way up. Little things like that are never really told to players, resulting in accidental trial and error that could be avoided if the system was better explained from the start.

When you hit an opponent or they try to hit you, a percentage is shown in the status window, but I’d also like to see how that is calculated, so I could build up a better character or buff the right skills. That would be a good way (and a rather easy one) to bring players out of the dark because they would know that X percent of their armor class came from their shield skill and Y percent came from their dexterity modifier or whatever. These things are well explained (and well known for the most part) by those who play Dungeon and Dragons based games. Basilisk Games seems to have created a pretty stable system of their own. I just don’t know it and nobody else will either, unless they tell us how everything works. Trust me, hardcore RPGers will probably enjoy studying the system and tweaking their characters as much as actually playing the game if allowed to do so.

Going back, I have to say that some of these calculations were pointed out in the .pdf file that came with the game. I didn’t realize that this was included. It doesn’t answer all my questions, but does dispel a lot of the mystery. As such, I increased the gameplay ranking slightly from my original score.

The graphics obviously aren’t the selling point of this title, but are functional and look pretty good with that old-school style. The sound pretty much follows suit. It’s not something you will write home about, but there are some good sound effects and really good environmental background tracks that help to bring the world to life.

The heart of a game like this is going to be the plot, and Eschalon Book 2 has a really nice one. But it’s not just the main plot that’s enjoyable. There are a lot of side quests that you can follow, with interesting back stories of the NPCs involved in some of them. There are even a couple moral dilemmas in the game, though I always want to see more of that. Some of the sub-plots and even a couple dungeons are entirely optional and a little bit hidden from view. The game does a nice job at hinting about their existence by showing you things like houses in towns with no apparent outer doors, but with mysterious staircases (houses are cut away in the top down view) that lead up or down to other levels. Doing the legwork to figure out how to get there is entirely optional, but really worth it if you do.

Kudos goes to the developers for creating a game that was mostly bug free. Other than a few non-game-killing (and very minor) things here and there, Eschalon Book 2 was entirely stable. Some of the huge development teams should take notes about what a smaller firm can do with a lot of talent and concentration. When I review titles, especially in-depth RPGs, I keep a list of bugs and crashes. With Book 2, that part of my page was almost completely blank, which almost never happens.

I had a really great time with Eschalon Book 2, and I’m pretty sure most role-players will too. It’s great to see a game like this that’s easy to play, but doesn’t dumb down the RPG engine to try and appeal to the casual gamer. A casual player can figure their way though the title without too much trouble, but Book 2 is aimed squarely at the old school, hardcore RPGers out there, and I for one appreciate it. And what you get for the price really can’t be beat. It earns 4 1/2 GiN Gems for Basilisk’s treasury, just a few of the many awards this title will likely pickup.