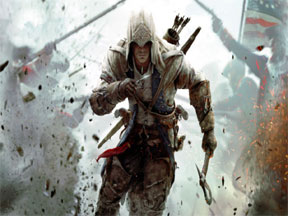 The trademark of the Assassin’s Creed series has always been the hooded figure traversing the bustling and beautifully realised city streets from days of yore, and leaping over rooftops to escape city guards. On those terms, Assassin’s Creed III doesn’t disappoint, but it dishes up a game with a distinctly different feel. If you’re expecting more of the same, you need to think again. Gone are the enigmatic heroes of Ezio and Altair and enter stage left comes Connor, the half British, half Native American protagonist of this new story. We also swap the cramped, higgledy-piggledy alleys of Renaissance Europe with the wide open spaces of the New World, in what is a refreshing shift of gear.

Assassin’s Creed III takes the American Revolution as its setting, sweeping us along on a journey through this exciting period in history. This is the biggest AC game to date, offering us more sidequests, naval battles, historic figures and a map that spans New York, Boston and the Frontier in between. The New World becomes your playground and Ubisoft dishes up a smorgasbord of toys to play with.

In the forest you can hunt the likes of cougar, bears, deer, rabbits and wolves. In the cities you can search for the lost pages of Benjamin Franklin’s almanac, fight Red Coats to aid oppressed citizens and liberate parts of the city, search for trinkets and treasure chests and start riots by inciting groups of locals on street corners.
Sometimes Less is More

This game offers us more content than ever before, but it’s also less coherent than ever. The epic ambition of the game is never quite realised.’In Assassin’s III you can captain a ship, be a trader, hunt animals and sneak the streets as an assassin, but somewhere along the line a disconnect between the game elements sets in. Whilst there are a wealth of ingame distractions, they just aren’t integrated very well. Recruiting and training assassins, which played such a key role in Brotherhood, is now just an afterthought that gets lost. And the trading and crafting elements could quiet easily be removed without losing anything. In fact, it may take concerted effort on your part to figure out how they work because the game doesn’t make it easy to engage with this content, making them essentially pointless.

From the outset, Assassin’s III does wow you with its scale. The game opens in a London opera house, which is the perfect set piece to show off the game’s improvements. This theatre assassination mission is a dazzling display of the amazing, new crowd animation, as well as the new and improved fluid movement, which makes free-running even easier.

However, after the suave entry point, the pacing begins to suffer. The game really takes its time to kick-in with the action. You don’t start out playing as Connor, so the intro does a lot of scene setting before we actually get to meet our new hero. We then follow Connor from boyhood, through his teens and into adulthood.

Hero of the Hour

Although I liked Connor, and his story is the most compelling of all the Assassin’s series, the charm and swagger of Ezio is difficult not to miss. As I’ve said before in my EuroFiles column, I feel that Ubisoft were treading very carefully in their portrayal of the Native American protagonist. This is no bad thing in and of itself, but the result is that Connor is dull and humourless. There are attempts at humour, but Connor’s surly, scowl becomes a little trying in moments of light-relief. I really hope that we do come back to Connor or another Native American character, but next time Ubisoft should have the confidence to give him (or her) a bit more edge.

However, Connor’s story is rich and seamlessly ‘intertwined with major events, such as the Boston Tea Party and various battles, bringing him into direct contact with the likes of George Washington. But don’t expect a Brit-bashing because the story places Connor in the perfect position to see history from both sides.

You really feel for him, as he strives to protect his people. He is torn between two political sides, who have no interest in his plight, but will manipulate him for their own gain. With our hindsight, Connor’s story becomes a tragic tale, as we know the outcome. There are pivotal moments that really pull at your heartstrings, making this the most effective narrative of the series.

Before you get to the heart of the great story, your first few hours with Connor lead you by the nose, in what seems to be an extended tutorial. Connor is nothing more than an errand boy for quite some time, engaging in missions for other characters for reasons that are less than convincing. However, when the game does let you off the leash, the map is littered with icons. And icons means missions and sidequests. You can hunt for the obiligatory feathers, explore the forest to trap and kill animals, free forts from Templar rule and in the cities you embark on missions to help defend NPCs against thugs and heavy-handed landlords.

Of all the new distractions, the naval missions are a real highlight. A far cry from the annoying ‘capture the tower’ missions of Revelations, the seafaring quests are action-packed and fun, without being frustrating. This isn’t just padding. At the helm of your ship, you must navigate through stormy seas with overhead waves crashing down on the deck, while the enemy fires their guns, sending splinters flying. You must battle against the wind to bring your ship around, as your crew scuttle about on deck to man the cannons, shouting at the enemy and asking for their next set of orders.

If You Go Down to the Woods Today

However, the real heart of the new setting is the frontier, which steals the show from Boston and New York. The New World cities seem to lack the freedom of Venice and Jerusalem. The streets are wider, making rooftop runs more difficult and there are guards everywhere, combined with a lack of courtesans, thieves and mercenaries to help you out when the heat is on.

In contrast, the forest is a place of peace and respite, where Connor feels at home. It takes a while to see how you can freerun in this setting, but then your eye begins to find felled trees or crooked branches, which provide nifty handholds in the treetops. From there, you can parcour through the forest canopy. From your vantage point, you can drop down on animals or enemies or just sit up in a branch and enjoy the view of craggy mountains, waterfalls and river valleys. The only pity is, that very little of the action takes place in the frontier, which is the real star of the game.

Whilst Assassin’s Creed III is a fresh new adventure in a long-running series, it’s not always successful. Be prepared for bugs and glitches to play a large part in your experience. And although the game looks beautiful, it also suffers from chronic pop-up and chugging frame-rate drops.

Considering the assassin training, tunnels and trading elements of the previous games were so well integrated, it’s baffling that they seem to be a tacked on afterthought in Assassin’s III. In addition, some of the missions feel like padding and exercises in frustration, such as the oft-repeated chase missions, whilst others seem to eschew the freedom that the game seems so ‘keen to convey. It feels like a game that is trying so hard to be Red Dead Redemption, in terms of epic scale and story, and in places I just wished I was playing that instead.

That said, Assassin’s III succeeds on many levels. Connor may have his lacklustre moments, but he’s the sympathetic hero of a rich and compelling story, set against the backdrop of a world-changing period in history. And in Connor’s favour, at least he’s not Desmond, who takes his daddy issues to a whole new level of dull this time around.

For lovers of the series, I think Assassin’s Creed III will be a welcome addition. It doesn’t make any major leaps forward, and although there’s room for improvement, it’s more than a worthy successor.’