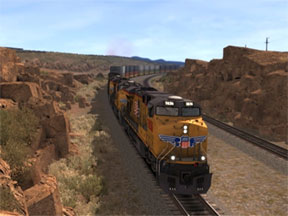 The legacy rolls on as RailSimulator.com continues to own the virtual railways with the latest version of their superior train sim pushing the envelope on realism through top-notch graphics, true to life gameplay mechanics, and a newly upgraded user-friendly interface. Train Simulator 2013 has arrived, and like its predecessor is a title that is definitely going places.

The brand has been widely accepted amongst hardcore enthusiasts since its original release, but now with its more recent mainstream debut on Steam, it’s really picked up some momentum baiting the interests of both hardcore and casual gamers.

The digital download of the game originally comes with four routes and gives players a choice of eight distinct locomotives to choose from. Besides original content, there’s a ton of great DLC out there just waiting to be had, for a nominal fee of course. Upon purchase, access will be granted to drive some of the world’s mightiest machines on select railways and railroads plotted from all parts of the globe.

The game looks absolutely amazing upon first look. Skads of amazingly detailed tree and plant foliage, bold and colorful land terrains of every sort, well defined cityscapes and key local building structures backed by all the bells and whistles of the railway system including traffic signs, signals, crossings and even over-water bridges help to make up some of the most incredible larger than life 3D landscapes that any train lover would come to appreciate. Add to that a score of sun, rain, and snow effects and the results are something really special.

With the help of DLC, players will have a huge assortment of locomotives from all eras at their disposal all beautifully mapped and exacted to match their real-life counterparts. Among a few notable rides include the 1940 GE-44 Union Pacific, the oil-burning Southern Pacific Cab Forward, the 1964 4CIG electric multiple unit, and even the next-generation Ice 3 high speed train introduced in 2000.

Besides meticulous attention to graphic detail for each train, all of them boast their own authentic sound and sound effects, a feat that should not be overlooked without handing out some kudos to the dev team. The fantastic audio engine integrated into the game significantly impacts the overall driving experience.

The game also features a newly upgraded user friendly interface designed for quick access and navigation for new and veteran users. After the start menu, players can make use of the new collections screen which provides a nice view of all the routes and locomotives you own as well as available DLC you can purchase from Steam. Here you can quickly select your ride, route, and mission soon get on your way.

Once inside the cab of your personal locomotive you will notice a handy and resourceful opaque control menu designed for easy and smooth operation. The brake, direction, speed and power features are located directly in the center of the hub with a convenient mini-map just off to the left to keep track of distance and nav points. If you are a newcomer to the series I highly recommend you take the tutorial mission which explains in depth how the controls here work and affect your train as well as proper travel protocol before you eagerly jump into a random scenario.

Among other cool things you will notice is a nifty camera map just off to your right which allows you to manually pan different camera angles at any time during travels so that you can enjoy the ride from your own personal point of view and even snap a few screenshots to savor the moment. Off to the more extreme right of the control menu you will notice emergency kill and start switches. A really cool feature in the game if you’re an advanced user is that you can turn off this helpful overlay menu completely and utilize all the visible controls within the cab if you’re knowledgeable enough about how they all work.

Once you’re off and running you’ll be presented with different tasks to accomplish depending on the scenario or mission you have chosen. Most of the requisites, while pleasantly challenging, are fairly repetitive, though usually requiring you to navigate safely between checkpoints, obey speed limits, stop at certain locales, pick up passengers, and blow your horn at all crossings. Though the list of tasks is pretty rudimentary, the choice of locomotive, the area in which you navigate, and weather effects will affect how efficiently you accomplish them or not. At the end of a scenario depending on the mode selected you will be graded on your overall performance during your mission.

There are also some noteworthy mentionables about the multi-player features of the game like ‘relay’ mode where you can run a particular leg of a route and then have the option of handing off the remaining legs to your friends to finish out. Also, thanks to the game’s ‘workshop’ mode, users can go in and manually create their own unique scenarios and then upload them for friends to play. The game hasn’t been out for too long, but already there are many community missions out there just waiting to be explored helping to further extend replay value.

The bottom line is while Train Simulator 2013 is seemingly geared toward hardcore enthusiasts, it’s perfectly suitable for the casual crowd too thanks to its new and more user friendly interface. Also there’s tons of DLC out there along with some free content and lots of community constructed scenarios all actively playing a major role in the replay value department. The game is visually magnificent with careful attention paid to both environment and machines, and is well-backed by a superior sound engine.

If you’re a huge fan of trains or were just one of those misfortune kids who never got a chance to get that really cool train set because your parents said it was too expensive and so you spent countless hours looking in store windows watching that magnificent vehicle go round and round the track, hoping, wishing, DREAMING, SALIVATING OVER HOW YOU GET YOUR GRUBBY LITTLE HANDS ON THAT FANTASTIC TRAIN…umm, just saying…then buy this game. You won’t be disappointed as it racks up a solid 4 GiN Gems.