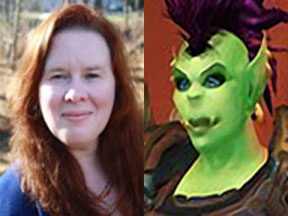 Who knew that being a gamer was so controversial? Colleen Lachowicz decided to run for state senate in rural Maine. She was a Democrat running for a traditional Republican seat, but that’s not what became the focus of the campaign against her.

People found out that she played the World of Warcraft MMO. In fact, she’s a level 85 Orc Assassin named Santiaga. Her opponents began running ads featuring her picture and that of Santiaga, saying things like ‘Lachowicz has a secret dark side that you don’t know about.’ Apparently they went so far as to follow her around within the game and use things she reportedly said and did against her in attack ads.

Now, besides the fact that we doubt there is very much to do in rural Maine other than play Warcraft, one wonders how a bunch of political operatives would have gone unnoticed in WoW. I mean, what a funny scene that must have been, with the level 85 Santiaga being followed by some first level Goblin paparazzis trying to catch her doing something incriminating.

The conversation between the Goblins probably went something like this, at least in our minds.

‘That’s got to be her, the state senator candidate we’re supposed to slander,’ says the first goblin. ‘The big one with the axe over there.’

‘We need to catch her doing something evil or incriminating and take a screenshot for the ads,’ the second goblin responds.

‘Can you even eat babies in this game? I haven’t seen any.’

‘I don’t know. I can’t even get my character to move forward.’

‘I don’t know, try the arrows. Oh, crap. Santiaga has seen us. She’s coming this way!’

‘Dude, she just took your head off with an axe. So cool!’

In any case, all the attention given to Lachowicz’s ‘dark secret’ probably gave her a much larger presence in the race than she would have ever had without it.

She smartly turned this to her advantage, releasing a statement saying ‘What’s really weird is that the Republicans are going after my hobbies instead of talking about their record while they’ve been running Augusta for the last two years. Instead of talking about what they’re doing for Maine people, they’re making fun of me for playing video games. As a gamer, I’m in good company with folks like Jodie Foster, Vin Diesel, Mike Myers and Robin Williams.’

Now, as gamers, we think it’s kind of unusual that money would be spent on attack ads to highlight what is a harmless (and fun) hobby. I mean, what if she played golf instead, or wrote graphic novels, or was the captain of her softball team? Are any of those activities illegal in Maine? Is Warcraft?

In the end, the good people of Maine thought the same way, electing Lachowicz, and in a way Santiaga, as a first time state senator by about 900 votes, which is a good margin in an election with fewer than 20,000 ballots cast overall.

Whether or not Lachowicz makes for a good state senator remains to be seen. But we can guarantee one thing: she won’t sink or swim just because she’s a gamer. That said, it’s always nice to see one of our own succeed. God speed!