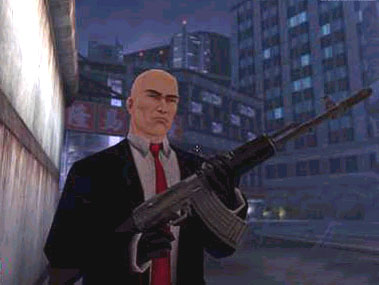 Eidos Interactive’s definition of a contract: A death warrant for the damned. The terms of execution? A binding proposal of interest between two conspiring parties, usually both financial and/or strategic. You can define a contract as you so please, but if you’re the target it only means one thing. Treasure these moments of your very short life…as if they were your last. He’s coming for you.

Eidos’s Hitman:Contracts is the next chapter in their "chronicles of an assassin" series and this one comes with a slight new twist. In "Contracts" we find our infamous dark hero severely wounded and hanging onto life by a small thread. He stumbles into what I believe to be his apartment and collapses onto the floor.

Apparently, the wheels of fate have turned against him as he has become the unfortunate recipient of a "hit" gone bad. As he lies helplessly on the floor with a bullet in his gut, he contemplates what went wrong. Before too long he begins to fade in and out of consciousness.

In a nutshell his life starts to flash before him and he begins to recall his past "jobs" or "hits" and thus Hitman: Contracts is born. Players will reenact all his random past contracts and if you’re a veteran of the game you’ll recall a few familiar ones.

Visually, Hitman: Contracts is most definitely an above average game and certainly the best looking in the series, but that doesn’t mean there isn’t any room for improvement.

The Good? Eidos has chosen some of the best environments to pull off a game of this genre. "Contracts" isn’t really a linear type game, and so players will have the opportunity to see the world abroad.

The path of the Hitman will lead through geographical locales like the cold subterranean areas of the Russian Artic or the colorful, boisterous streets of Hong Kong after hours. In one instance, Agent 47 might find himself trying to take out a heavily guarded Weaponslord waiting for a special shipment in the city harbor. Meanwhile S.W.A.T is waiting just outside getting ready to kick the door down and take out anything breathing or standing.

In another instance he might find himself hiding out in the holly bushes and stables of the broad, beautiful, and tranquil estates of Belingford Manor, home to an extremely wealthy crimelord, about to meet with an unfortunate fate. No matter where your travels take you, the mood is always set with cool lighting effects, broad interactive environments , and the perfect cast of bad guys and victims.

Oh that’s right, the not so good? In terms of animation all eyes have to come to rest on our hero in particular. It’s hard to overlook the fact that he looks as if he’s moon walking everywhere he goes. It’s amazing to me with all this advanced video technology at our hands that you can still find things like this in a game. Also he has the ability to lean himself out either to the left or to the right without putting his back to the wall.

Supposedly you can use this maneuver to peek or even shoot around corners while facing forward. The problem is that Agent 47 is so stiff that most of the times you never get the view you desire or you alert a guard or civilian by bouncing bullets off the corners of the wall. It seems the only way to remedy your frustration is to step out into the open and take a quick pop shot with the silencer, or option two, avoid the situation entirely if possible.

Thankfully though, the addictive factor of this game lies with the gameplay. What makes the Hitman series a crowd favorite is the fact that it offers gamers a different aspect of stealth and strategy games.

For instance, in games like Splinter Cell, Metal Gear Solid, or Navy Seals: S.O.C.O.M., the key to becoming a master of stealth and strategy lies in recognizing a few common tendencies. Military strongholds , for example, are very orthodox operations. Everything has an order to it and so it makes it easy to identify tendencies like a 10-second window of opportunity between guard patrols, the best time to hitch a ride on a military vehicle to bypass the security gate, or the best place to set up shop for a sniper camp. These are the kind of elements that fans have enjoyed in games for years and love so much.

The Hitman series takes all of these elements and throws them into domesticated or civilian environments. The result is a stealth game with lots of turns and twists along the way to completing your objectives. Instead of looking for that 10-sec window of opportunity to slip in past the guard patrols, you’re looking for that lazy guard that likes to shirk his duties by wandering away from his patrol area, gossiping with his buddies, or catching up on that sleep he missed the night before.

Why stow away on a military vehicle when you can opt to nab yourself a V.I.P guest, steal their outfit, and walk right in past security? It’s pretty easy to snipe your mark from a distance ad escape with little difficulty, and yet it’s so much more fun when you sneak in the backdoor and poison his tea. Simply put, the Hitman series’ "do-it-in-style" approach to games of the genre put that extra jazz in the mix to make players keep coming back for more.

Having a game plan is good, but bringing the right weapons on the hunt is absolutely essential. Pistols and handguns should be the weapons of choice when dealing with heavily guarded targets. Nine times out of ten you’ll need to get in close to these kind of people by way of disguise. Pistols, handguns, and even fiber wire (strangulation cord) are easily concealed underneath your clothing. The only thing to do next is wait for the perfect opportunity to strike.

Sometimes combat is totally unavoidable. Ok, I’m referring to those times when you screw up and find yourself surrounded by heavily armed guards. Addressing the situation with the right arsenal will ensure you live to kill another day. In close quarters combat, submachine guns are your best bet. These weapons don’t have much accuracy, but they do offer a high rate of fire power. A couple of well placed shots will drop your enemy like a hot potato.

Assault rifles are good for fairly distanced combat, particularly in outdoor situations where there is a bit of guerilla warfare going on. When the situation is a bit too hot, keeping distant and out of sight is more to your advantage. In these cases you should call on your two best friends, "Precision" and "Accuracy" both combine to form a sniper rifle, the classic weapon of choice for any assassin.

Then there are those moments when the law must be layeth down and evil punished to the fullest extent. The shotgun will show no mercy and its power will go unchallenged.

The bottom line is "Contracts" keeps the tradition of solid, action-packed gameplay going for the series. Having a number of options to eliminate your target allows for gamers to inflict their own personal style of punishment on evil doers. Even with its minor gripes Hitman: Contracts still comes out ahead in the long run. This is definitely one to add to the library. I’m putting the "hit" out on this one for 4GiN gems.