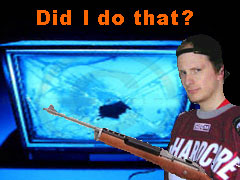 I am barely getting this commentary done in time as I have been out of town for the 4th of July holiday, just returning right before the deadline. Not only did I have to endure a six hour road trip (including extra time since "road destruction" kept my new car at a standstill for a while), but also the urge to not get too deeply involved in the Chronicles of Riddick on the Xbox. Hearing my girlfriend drool over Vin Diesel's digital likeness didn't help either.

But now that the holiday is over and I'm back at my humble little abode, it is time to get back to business, and what I noticed on my satellite is something I wish would never happen: a merger between TechTV and G4.

Actually I have known about this for a while, but I thought I would luck out and not have to experience this nightmare firsthand, as press releases mentioned that the merger would be exclusive to Dish Network customers. Being a highly satisfied DIRECTV customer, my response was "so what?"

That wasn't the case, as I did notice that the merger is also on my DIRECTV system as well as rival Dish network, and I don't like it at all.

In the past, television shows about video games have left a bad taste in my mouth. With the exception of the early 80s classic Starcade (which is now being released on DVD directly from the producer's website), other shows have been nothing short of juvenile. Anyone remember Video Power back in the early 90s? I hope not because the host (appropriately named Johnny Arcade), acted like a prepubescent jerk, and they centered mostly on subpar Acclaim titles. Gamepro TV would not have been bad, if it weren't for an idiot sidekick named Brennan, and the less said about whoever hosted that late night "Video Game Explosion," the better!

(Commentator's note: I do not have any experience with the Electronic Playground, so I am admittedly unable to comment on that.)

Now I will admit that TechTV's Extended Play (or X Play or whatever they call it) is done somewhat professionally, but what I hate so much about that show is that they used to brag about broadcasting from Metreon. True, they now have their own studio, but it used to always be "Welcome back to Extended Play from METREON in San Francisco."

Some of you may ask me "so what?" I'll tell you what then. Metreon is owned by Sony, and to me, that's about the same as being in Sony's back pocket. Ergo, any title that is made for the PS2 would get a perfect score while a four-star Xbox or Gamecube game will be trashed. That's what happens when you're paid off by Sony (in the same manner that Next Generation magazine was.)

On the other side of that hate-hate relationship is the horrid G4. I will admit that until now my only experience with G4 occurs during E3, but what I see is more juvenile than even that moron Johnny Arcade. Their production team looked like a bunch of college kids who would rather interview booth babes than looking at Halo 2 in great detail (as if they think that they will be able to score with the girls). Need I also mention how rude they were as well? Case in point, I had a one-on-one meeting with the producer of EA Sports' NASCAR: Chase for the Cup 2005, and all of a sudden I was pushed out of the way by guess who? That's right, a member of the "orange shirted Gestapo" that is G4.

On the bright side, later that night at a party hosted by AOL for Broadband, that same NASCAR producer ran into me and apologized to me for what happened. I simply told him "No problem, I'm used to G4 interrupting everything") as we rescheduled our conversation.

I know there are those out there who like the fact that these two networks are merging, but I am not one of them. Rather than watch the new G4TECHTV, I'll be logging onto the net to get my news and reviews. Hell, I'd rather read anything that Jeff Gerstmann reviews (even though I know he'll just give it his beloved 7.2 rating ) At least it will be done more professionally.