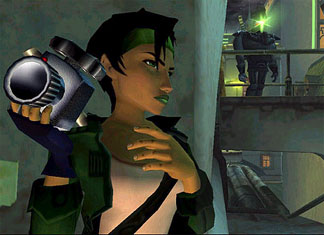 In the plethora of adventure games on offer, it’s hard to find a good one. Beyond Good & Evil steps courageously up to the plate and offers gamers a new heroine. Unlike her predecessors, she has a huge pair of green eyes and has the good sense to go adventuring in combat pants. Even the obligatory annoying side-kick is actually funny and likeable. What’s going on; is this heralding a new era in adventure game characters?

The planet Hillys endures daily attacks from the Domz. The Alpha Section troops are finding it difficult to protect the people of Hillys, who are getting abducted in droves. Something’s got to give and someone’s got to sort this mess out. Cue Jade, adventure reporter extraordinaire!

Jade is a young reporter who doesn’t take any crap. When the Domz attacks hit too close to home, she decides to rescue her friends and get to the bottom of the trouble. Armed with her trusty camera, Jade sets out to gather evidence and find the truth, which is always out there (allegedly).

The story begins at the lighthouse, which is the home Jade shares with a group of Hillyan war orphans and Uncle Pey’j, the humanoid pig that raised her. No sooner has the game started than Jade is flung into a battle to defend her friends when the Domz attack. It all gets very dramatic when everything jumps into John Woo style slow motion mid-battle. This gives you the chance to use Jade’s special attack to best advantage. But to no avail – the children are kidnapped and so Jade’s quest begins.

No sooner has Jade left home and arrived in the Pedestrian District of the city than she is recruited by the IRIS network, which is an underground resistance movement intent on proving the Alpha Section’s involvement in some evil deeds. Unsure of who to trust, Jade is dragged into a world of conspiracies and political tension.

At first glance, Good & Evil looks very free-roaming, allowing you to do the missions in your own particular order. However, once out on the open water in your hovercraft you soon come across laser beam barriers, stopping you from fully exploring the area. However, the limited freedom the gameplay allows is appreciated and provides adequate distractions between missions.

Sub-missions include hovercraft races and fighting your way through caves full of nasty creatures. Beware the cave full of pirate looters and be prepared for a full on hovercraft chase in order to get your stuff back and collect lots of money.

Jade’s main source of income is her camera. Right at the beginning of the game, Jade agrees to help a nature researcher make a catalogue of all the planet’s fauna. Reminiscent of Metroid Prime, Jade takes pictures of all the creatures she sees on her travels and sends rolls of film to the researcher in exchange for pearls. The pearls are invaluable for buying upgrade parts for the hovercraft, which prove essential for gaining access to certain parts of the planet and completing missions.

Jade’s camera can also be used to analyse her environment and later fires discs which are very handy for triggering switches remotely. It is also essential for gathering evidence for IRIS. Through the game Jade is joined by a companion; Pey’j and later Double-H, a member of IRIS who is an amusing homage to Buzz Lightyear. Her companions do not fight independently, but by pressing B you can command them to do things like open doors or perform their special moves.

When it comes to fighting, Jade’s pretty handy with her stick (Dai-Jo) and by holding down A she builds up energy to let rip with her super attack. This can be a bit tricky in boss battles, because it leaves her vulnerable to attack. Co-operation with her companions is often vital to dispatching with enemies.

Jade has to use stealth as much as she uses her fighting skills. Infiltrating factories and warehouses with mysterious significance, Jade has to solve puzzles and access all areas to get the vital photos. Be prepared to spend a lot of time memorising the marching patterns of guards and sneaking along behind them before ducking down a nearby corridor. I have to say the sneaking got a bit tedious and forced replaying some sections, but the puzzles always provoked just the right amount of head-scratching.

The world is beautifully realised, with hover traffic buzzing around the canals and media propaganda blaring from floating screens. The streets of the city are buzzing with inhabitants, Alpha Sector guards, street vendors and protestors. Double-H was my favourite character for funny one-liners, although his armour’s so bulky that often he blocks the camera or it’s hard to get round him, which was very annoying. There are moments when the frame rate drops and the camera angle is less than helpful, but it’s never intrusive.

When it comes to snapping pictures of various animals, my favourite moment had to be finding a whale one moonlit night. To be able to send a picture to the research institute it has to be framed correctly. I was determined to get the perfect shot of whale tail disappearing into water. It took me two solid days (Hillys days, obviously) to get it, but I enjoyed every moment.

But without a doubt, the most superb moment is when Jade is pursued by guards across the rooftops of the Pedestrian District. Think Matrix (in a good way) and you’ve got the level of adrenaline. The beauty is that Jade makes jumps independently, so there’s no Lara style leaping to your doom. All you have to do is direct her and Jade performs the most exhilarating running sequence, complete with slow-mo leap of faith.

There isn’t much you can fault Beyond Good & Evil on. Even the story is engaging and has a few emotional twists to tug on the old heartstrings. The last level is superb, as is the final boss battle. And the best thing is the cliff-hanger ending, which suggests Good & Evil 2 is on its way.