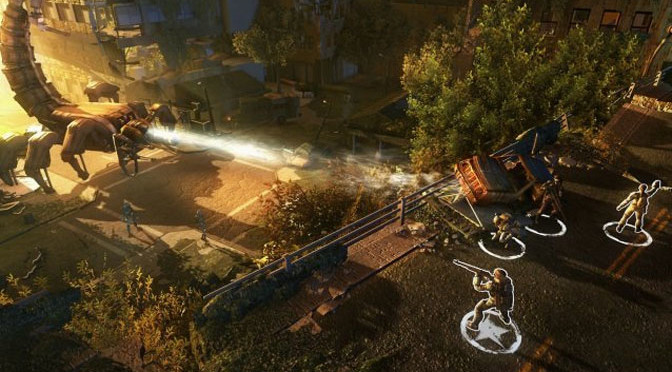 We were pretty happy when Bryan Fargo and his team over at inXile Entertainment brought us a remake of the classic Wasteland with Wasteland 2 last year. It was even nominated for the GiN role-playing game of the year by readers. But it wasn’t quite perfect. It was good, but the graphics and sound were a touch lacking, especially if you don’t like to do a lot of reading in your RPG. And it was only available for the PC. So we were even happier when Wasteland 2: Director’s Cut was recently released, trying to improve on the previous version, and coming out for both the PlayStation 4 and the Xbox One alongside of the improved PC version.

We strapped on our six shooter and headed out to dusty, post-apocalyptic Arizona once again. This time we traveled there using the PlayStation 4.

Wasteland 2: Director’s Cut doesn’t change the story from the 2014 version, though given that there are several faction choices and do or die type decisions along the way (where supporting one NPC or group ends up having negative consequences – normally death – to another) the emergence of the Director’s Cut might be a good excuse to go back and play through the game one more time to see how the world might have turned out differently.

In terms of price, the new version of the game is priced at $40 for the console versions, and if you are buying it for the first time on the PC, it’s going to be about the same price barring any Steam sales or whatnot. However, if you previously bought the game for the PC, then you can get the Director’s Cut for free on the PC. If that applies to you, stop reading this now and go get your free download started. It would have been nice to give previous PC purchasers some type of a discount if nothing else for the console versions too, but that would have been a logistical nightmare, so inXile can be forgiven for not offering it.

In terms of story, nothing has changed from the 2014 game. It’s the same game. In case you need a quick refresher, Wasteland 2 takes place several years after the original title from 1998. Many of the default characters from Wasteland are now running Ranger HQ, which itself has moved out of the prison the rangers once commandeered to call home to an actual military compound. Snake Vargas is now in charge of the outfit, and he’s much different than he was back in his wild days. Now older and wiser, he is sometimes criticized by other rangers for being too cautious. He has built up the organization to be sure, but his lack of patrolling has left the wasteland more lawless than it should be, and there is even a rival group of “peacemakers” to contend with now. You and your new Echo squad of raw recruits are part of the effort to change all that as patrols resume in earnest.

So what has changed? For one, the graphics have been given a major overhaul. Working with the Unity engine, the top-down interface makes the world look really good now. It’s not quite cutting edge graphics as we think of it today, but much better than before. Places like what passes for cities in the wasteland with all their little messed up cars and houses and signs and stuff have a lot more character. Everything is easily recognizable as its own place now with its own distinct atmosphere.

The characters all look much more realistic and there are more outfit choices as well, though I would have liked to have seen a bit more customization options for the four playable ranger characters that you start the game with. I like to keep trying until I find the look that is “just right” and I just didn’t have enough choices for that. Thankfully you can find a few more choices out in the wastes.

Where the character creation is really deficient is that you still only have a paltry six portraits to choose from when making a custom ranger character, and you are sure to run into your doppelganger out there in the wasteland at some point. I long for the days of Neverwinter Nights where you literally had hundreds of pictures to choose from to represent you.

The second main difference with Wasteland 2: Director’s Cut is the sound. Almost all of the dialog now has voice acting behind it. All of that text still comes up in a window when you meet someone, and you still have the possible responses arrayed along the bottom of the screen, including any special responses that you can make based on your skill, such as if a hardass or smartass choice is present. The change is that for the most part, those characters will actually read their lines. And the voice acting is quite good. The developers really mixed up the number of accents and dialects of the people you meet. Given that before you only really had a picture of the person you are talking to for flavor, adding in voice is great. You can even kind of tell when a character is lying or not giving you the whole truth now by the tone of their voice, which is a nice touch.

I’m not sure how inXile handled the voice acting. My guess is that they had to have professionals do it all. It’s too good to be a bunch of office workers just asked to read a few lines for the game. Some of the accents used could have gone very badly had they been done wrong. But it all seems really good here and adds tremendous flavor to the game.

Although thousands of lines of spoken dialog have been added, it’s not 100 percent, even in the Director’s Cut. Sometimes the more obscure lines, such as the ones that immediately follow a successful kissass role for example, suddenly go silent. That is a bit disconcerting in the middle of an actual conversation, but I suppose there was simply too many lines to do every single one of them. Still, it adds flavor to the game which is always nice.

On the console, most people don’t have a keyboard hooked up, so for the Director’s Cut the option to type keywords into the game directly has been removed in favor of only being able to choose what choices are given. This only affects gameplay at one place, where you had to type “both” into the game to make peace between two factions. I actually traded e-mail with the developers on this, and we discovered three completely different ways to make peace in the same area without having to type “both.” And actually, doing it the new way was a lot simpler and made more sense from a role-playing perspective.

Movement is of course controlled using the controller on the PS4 with the left stick directing your party and the right rotating the map. You actually have three interchangeable map control options with the first being just how I described it which is traditionally how isometric games work. The second option makes the map move horizontally, which is great for surveying the terrain ahead without putting your rangers into a potential ambush. The third scrolls the giant dot matrix printer so you can catch dialog choices or perceptions about the environment which you might have missed.

The controls are very smooth, but it would have been nice to have been able to zoom out a bit more. In the first mode where you will likely spend most of your time, it’s too easy to walk into a honey badger nest or right up to a fortified enemy gate and start combat unprepared. You can only see the equivalent of about 20 or so feet around you, and that’s just not far enough for tactical awareness in a game that favors firearms. So you have to compensate by switching to the second control method and scrolling around the map, which slows down the exploration.

The control scheme itself on the PS4 is surprisingly good. You simply left trigger to bring up a skills menu and a radial dial appears. Valid skill choices will be highlighted, so you can’t accidentally use surgeon on a computer for example. For combat choices, you use the right trigger. Options include single shot and burst fire if you gun can do that, plus things like called shots to body parts and an ambush mode where your ranger will shoot as an interrupt should anything come into their range.

I have to say that I enjoyed playing Wasteland 2: Director’s Cut on the PS4 more than I did on the PC. Perhaps it was partially because I could sit on the couch and relax while I played on a big screen, but I also think that going back and fixing many of the shortcomings of the original PC version was a great move by the developer. They could have easily just released the same game on the console and it would have gone over well enough. Putting in the effort to really improve things and add in new spoken dialog just makes and already fine game even better. And the fact that returning PC players, if playing again on the PC, get the game for free is also a classy move from inXile.

Wasteland 2: Director’s Cut takes an already great title and makes it even better. Bringing it over to consoles also offers a surprisingly smooth experience, better than almost any other port that we’ve previously experienced. I can’t say that it’s a must-purchase for PC players on the console, but I do know I had a bit more fun playing on the PS4 than I did on the PC. For new players, if you like deep, hardcore RPGs with old-school roots, it doesn’t get much better than this. Wasteland 2: Director’s Cut earns 4 1/2 GiN Gems for its console debut.

One thought on “A Worthy Wasteland With Wasteland 2: Director’s Cut”