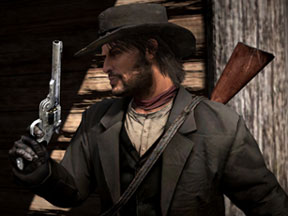 GTA in the Wild West. That’s what everyone expects of Red Dead Redemption, but they can think again. This is no simple thugathon. In fact RDR has more in common with Oblivion than it does with GTA. This is exploration gaming at its absolute best and Rockstar sets the scene in a cinematic style we have come to expect from the developer of the GTA series. In the opening scene, John Marston sits on a train, listening to the conversations of the other passengers. These are all NPCs you bump into again along the way. This isn’t the frontier west of Sergio Leone, this is a wild west on the wane, as the industrial age begins to make its mark. Marston is a dying breed, hinted at by the motor car in the opening scene, and we get the sense that we’re seeing the last days of a bygone world.

Marston is a reformed gang member who has a wife and a family and has settled down. However, federal agents have kidnapped his wife and child and threatened to kill him unless he hunts down his former gang and brings them to justice. Battle-scarred and jaded, Marston is put on the train to Armadillo, which is where we step into his cowboy boots.

Armadillo is a hot, wind blown dust bowl. Somehow, RDR conveys a feeling of relentless heat like no other game before it. The town is bustling with activity, while also having frontier emptiness to it. RDR hits just the right notes without being hackneyed. No sleeping Mexican, no spurs whirring as boots step on wooden boards and Marston doesn’t smoke cigarillos or wear a poncho.

The first thing that strikes you about RDR, is the landscape. There are tumbleweeds and dry, cracked earth with houses made of sun bleached wood. Then the sun begins to sink and the shadows get longer. The mountains are bathed in a pinky blue light, before night falls and then you look up at the star-filled sky and your eyes adjust to the cool moonlight. My first thunderstorm was something to behold. A dark, brooding night sky was suddenly lit up in a stark white flash and then plunged back into darkness. It didn’t feel like environmental effects. It felt like I was caught in a storm.

The world map is substantial and each area has a distinctive feel, along with its own flora and fauna. Wolves and coyotes will attack in packs and then run off if you kill too many of their number. While deer and wild horses roam the landscape, racoons, skunks and rabbits scuttle for cover as you ride by. Beware the cougars, which can kill your horse in a heartbeat – something I found out the hard way.

When you first start out you’re limited to a relatively generous, but easily traversed area. This opens up as the game progresses, and halfway through you can cross the border into Mexico for a whole new set of experiences.

After the look and feel of the game, it’s the dialogue that strikes you. The dialogue is a cut above. Now, Rockstar is known for valuing good voice acting, but they have surpassed themselves this time around, without falling back on celebrity clout.

Bonnie and Marston actually have chemistry, making witty jibes at each other as they ride out to patrol the ranch. The writing is top notch, but it’s the acting that really brings it alive and that’s not just from the human element. Onscreen we’re treated to subtle facial expressions, which add depth to the script. During a conversation, Marston may flick a stone from the heel of his boot or just laugh in response to a question he doesn’t want to answer. Sometimes it’s what he doesn’t say that’s important, which is a sign of the quality of the writing and all aspects of the acting.

The NPCs are not cardboard cut-outs either. The world is littered with people who have lives to live and bustle about the towns and countryside. They will say "howdy" as you pass by or invite you to sit with them for a while. Sitting and listening to camp fire conversations allows you to hear gossip, which changes according to your actions in-game.

Missions come from folks you meet along the way and offer an ingenious variety of shenanigans. No more drug drops or gang warfare. Instead you can turn your hand to herding cattle or patrolling the ranch parameter at night or driving a wagon at high speed through bandit country. Try helping a charlatan peddle snake oil to townspeople, save an innocent man from the gallows by shooting out the rope or help an old man gather flowers to give to his wife. These random encounters make things more interesting as you explore the world. You do have the option to skip straight to your destination, but there’s always that nagging feeling that you may miss something.

With so many distractions it’s easy to forget why you’re there. The main missions fit seamlessly, as Rockstar has proven capable of doing time and again with GTS. In addition, you can pursue Sharp shooter, Master Hunter and Survivalist challenges for bonuses, by hunting and skinning animals, gathering herbs and then selling them along the way for money.

Bored yet? Then it’s time to mosey into town for a hand at poker, a stab at tossing horseshoes with a local or pay a dollar to watch one of them new fangled moving picture shows.

Way of the Gun

When it comes to gun play, once again RDR hits it just right, however once you get your lasso, a gun may seem tawdry. To really make your way in missions you have to master Dead Eye, which is effectively bullet time, allowing you to take out multiple targets at the same time, by slowing things down into a sepia-toned effect, reminiscent of Butch and Sundance.

The lasso really comes into its own when you’re out bounty hunting. You get more cash for your criminal if you bring him back alive. So get lassoing and hog tie the critter, before slinging them over the back of your horse and riding them back into town.

The random encounters really make this game. Sometimes a gang will be rampaging through town or someone in the desert will cry for help and it’s up to you whether you help or watch and wonder. And each encounter with a gang can be solved in your own style.

Every action you do decide on will contribute to your Fame and Honor. Fame is almost like XP, while Honor is a reflection of your moral path with good actions adding to your hero status and bad actions making you a villain. If you want to make the piano player stop playing when you enter the saloon and punters to run behind the bar in fear, then get slaughtering and get ready to ride your horse out of town as fast as it can carry you.

Before release Rockstar boasted about its horses and they really are the best I’ve ever seen in a game. Having ridden a few times in real life, I can say they’ve got it just right. The tug of the horses head as they walk, the ripple of muscles in the haunches and more than just two speeds. You can take it to a fast trot, a canter or go full throttle, but use too much of the spur and your horse will throw you. These are no dumb beasts. They will rear at the sound of a rattle snake or bolt if spooked. In short – these are the horses to beat.

Thankfully you don’t have to feed or groom your horse. Rockstar have remembered the mantra of fun not drudgery. Similarly, you can whistle for your steed, so no forgetting where you parked it and having to walk home after the pub.

Life Is Better With Friends

One of the most unique aspects of Red Dead is the multiplayer, which might even temp people who normally don’t indulge online. You can of course jump into various types of shooting matches, but the main thing is an open world call Free Roam mode. In that mode, Red Dead is kind of like an MMO, with lots of people running around doing various tasks in the world like shooting up bandit hideouts. As you increase in level, you can upgrade your weapons, change the way your character looks, and purchase better mounts that stick with you the next time you log on. You can even set up a private Free Roam instance, so that only your real-life friends can come in and adventure with you, or create a posse of friends that can ride together out in the public online world, fighting together and watching each other’s backs, sort of like a real gang. In fact, the multiplayer mode is almost as fun as the single player story, and that is saying a lot with a quality title like this.

RDR is fun with a capital F. Whilst I’m a bit jaded by the drugs and hip hop of the GTA games, RDR offers a new palette to dip into and it’s most welcome. At the end of a working day, there’s nothing better than just getting on my horse and riding out of my tin pot life for a while and heading into the sunset, even if I may run into some bandits or get a bounty on my head for accidentally stealing a cart. It’s all in a day’s work in a life of a cowboy – stubble, scars ‘n’all. Red Dead Redemption earns the first perfect 5 GiN Gem score for the year.