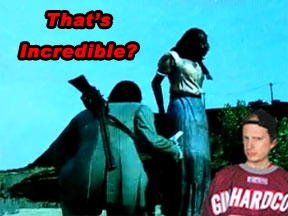 But we love them anyway…

The perfect game. We all wonder what it would consist of, and how it would be able to stand the test of time. Over the years we have experienced games that have come close, but never reached the height of perfection: Pac-Man, Super Mario Bros. 3, Metal Gear Solid, Goldeneye, Halo, and the Grand Theft Auto Trilogy to name a few.

And now, we can add Red Dead Redemption to that list.

Go figure that a game that I at first had no real interest in (mostly because of it’s weak predecessor Red Dead Revolver) would turn out to be one of the best games that I played in recent months. This is a game that throws us into an authentic reenactment of a spaghetti western setting, but doesn’t just stop at the source material. It provides a level of interactivity so massive that even the game it’s most equal to, Grand Theft Auto IV, is dwarfed in comparison.

To think that even after playing over 16 hours in the game, I’m still only at 44 percent completion. We’re talking about an RPG level of scope here! (And yes, I know that 16 hours might not seem like much to my readers, but if you look at all the titles I had to play recently, plus other personal matters, you can easily see why.)

Still, mostly because of its epic scale, gorgeous visuals, amazing voice acting, and even some of the best multiplayer I have ever seen (including a once unheard of 16 player Free Roam mode) Red Dead Redemption has been receiving rave reviews.

Although I normally don’t acknowledge other "professional" gaming sites that either force readers to pay to read their reviews, or even those who fire their reviewers for giving a negative score to a sponsor, even the more reliable "independent" reviewers are showing their praise and love over Red Dead Redemption.

One particular review that I recall quite well, comes from one of these independent reviewers, "Angry Joe" Vargas. I came across some of the work he had done via his Prototype review (another game I had no interest in until watching his review) and was very impressed with the honesty he provides, especially when it comes to games that are designed just for the big companies to make a quick cash cow. Take a look at his Halo 3 ODST Retrospective (the full version, not the edited Youtube version,) and you’ll see why Angry Joe has earned my respect.

But what does this have to with Red Dead Redemption? Simple, it was the first game that he reviewed that scored 10 out of 10, earning what he calls "Legendary (Gunfighter)" status, and I couldn’t agree more with him on it. But with giving RDR 10 out of 10, he does reiterate that it does not mean the game is perfect.

And perfect it is not. Reports have surfaced of some strange glitches. We’ve seen NPC players flying like birds, John Marston riding an invisible horse, a low rider stagecoach, a talking Taco Bell-like dog and my personal favorite: the donkey lady (a woman with the face of a donkey that can even be ridden.)

Personally I have not seen any of these glitches first hand, though you can find them with a quick search, or over on YouTube, but I did have one that occurred during a raid on Fort Mercer.

When I asked my gunslinger colleague to boost me up some boxes, Marston warped up above the boxes at first, only to end up back on the ground, and boosted up like normal. Considering I played over 16 hours already to just have the one glitch makes me wonder if they are sporadic between copies, or even if they are also console specific. (I couldn’t really tell if the videos were on Xbox 360 or PlayStation 3.) The game also did freeze up just once when about to load up a duel, but again because of the game’s great checkpoint and save system, it was a moot point.

Thankfully all of the glitches were not enough to kill the game, unlike other past 360 titles that were unplayable as a result (cough MLB 2K6 cough) But then again, it also prevents Red Dead Redemption from being perfect. And thankfully there are other reviewers like myself who don’t fully damn a game just for having glitches.

Then again, there is one. Or at least I know it will result in a negative review, if this Twitter post is correct: "Red Dead Redemption bugged out and now I can’t play any further. Hooray! Next game, please."

Take a wild guess who said that? Hint, he’s British born, lives in Brisbane, Australia, always seen wearing his trademark hat, and is notorious for hating almost every game he reviews. I guess that should a game come out that has no negative features, that said critic can find to rip apart, then maybe, just maybe, we might have found our "perfect game."

Editor’s Note: Tune in Monday for Chella’s full review of Red Dead Redemption. She’s our very own Brit, and we bet she’ll treat Mr. Marston a bit better than that other guy.