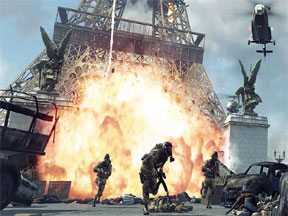 Modern Warfare 3 is now out, and even away from the game’s plot, the game was under its own inner turmoil. After the firing of Infinity Ward founders Jason West and Vince Zampella, and the eventual exodus of several other members, Activision summoned both Sledgehammer Games and Raven software to work on the game. Now when I had these feelings of dread before, it was when Treyarch was announced as the developer of COD: World at War, and thankfully my feelings for the game were so changed afterwards, I had to issue an apology. This time I didn’t have a bad feeling about how Modern Warfare 3 would turn out, and thankfully I was right, because the latest Call of Duty game feels like it should.

But perhaps it felt a bit too close to home.

It all makes sense though. Modern Warfare 3 picks up right after the events of MW2. The remains of the now disavowed Task Force 141, consisting of Captain Price and Nikolai, arrive at their safehouse and immediately give their comrade, Soap, desperately needed medical attention. However, they are immediately attacked by Makarov’s forces. They are joined by a new ally, a soldier known simply as "Yuri" who we later find out is more involved with Makarov than we thought.

Two months pass, and we see that World War III is now in full swing. Another new character comes in the form of Delta Force soldier "Frost." Usually Call of Duty games begin with a training mission at a base of some kind, but not Modern Warfare 3. The action kicks off right away, with the first Delta Force mission taking place right in the heart of New York City, including an assault at the New York Stock Exchange and later at Manhattan Harbor.

The war goes as far as including the abduction of the Russian President and his daughter en route to a peace summit, as well as the start of a European invasion that is triggered by a chemical weapon attack in London. The latter is shown through the viewfinder of a camcorder during a family vacation, in what is considered Modern Warfare 3’s "No Russian" mission. Personally, while I was initially startled by seeing it, I didn’t feel it had the same shock factor that the airport massacre in MW2 had.

The gameplay is the same intense, summer blockbuster style, first person shooter action that COD fans are used to. It does have that feeling that a typical summer film has, but nowadays it seems a bit too close to Modern Warfare 2. Many people have expressed their criticism of this, as the user scores on sites such as Metacritic have shown, but I am not one of the haters. I will admit I enjoyed the action that Modern Warfare 3 had, and even though many will disagree with me, I felt the ending did provide a satisfying sense of closure to the trilogy, even going as far as, dare I say, turning the tables on "No Russian."

Thankfully Modern Warfare 3 also includes new Survival Mode missions that are similar to the much beloved Zombie modes of the Treyarch games, as well as the Spec Ops missions that were popular in MW2.

And yes, the multiplayer that everyone knows and loves is back. However, the biggest change comes in the form of "Strike Packages" which separate streak rewards into three different sets: Assault (including Predator missiles and Attack Helicopters,) Support (UAVs and turrets,) and Specialist (which allows player to choose which perks they want to use.)

Two new multiplayer modes are now available. The first is called "Kill Confirmed," which only registers a kill after the victim’s dog tags are acquired, which can also be picked up by the other team to deny that kill, and the second is called "Team Defender," a form of CTF where the flag holder team will double the XP they get for their kills as long as they hold the flag.

My biggest problem with the multiplayer is level balancing. When I started playing multiplayer, it was after I finished the single player campaign, and when doing so, I ended up being the only Level 1 player I could find, while everyone else around me was up to Level 80. It felt unfair to thrust me right into the S-storm without giving me a chance to level up. I really hope that Infinity Ward comes out with a patch soon that will allow level balancing in order to make the game more competitive.

I want this more now that Activision is also starting up the Call of Duty Elite service, a $50/year premium program for COD players that offers monthly downloadable content, stat tracking, and special events, as well as video specials via COD Elite TV. Elite has suffered from some network issues upon launch due to excessive demand, which seems to be a common issue, and as a result, members were given a free month of Elite in addition to the standard 12 month subscription. In addition, Founding Members, including those who purchased the Hardened Edition of MW3, will also get another month to register with Founder status. It’s a nice little addition to have, but in all honesty, unless you have the Hardened Edition, it’s not really worth spending an extra $50 on unless you are the most dedicated of COD multiplayer fans.

And I think that’s how the whole game ends up. It’s an homage to those who are really passionate about the series. I might not be totally passionate as many other COD players, but it is a very enjoyable closing chapter to the Modern Warfare trilogy. I know a new COD has been announced for 2012, and most likely it will be done by Treyarch, so I’m curious to see how that will turn out. Maybe it will end up taking place during Desert Storm 1991, who knows? But yes, it’s time that the Call of Duty series spiced itself up and did something a bit more original, but don’t ruin the entertaining gameplay the series is known for. Not a tall order, right?

PROS: Despite the Infinity Ward turmoil this is a more than fitting conclusion to the Modern Warfare storyline. Puts you right into the story rather than holding your hand with a tutorial mission.

CONS: A bit too similar. Does not have a truly shock-inducing "no Russian" moment that the previous games had. Online play needs some more balance to get newer players more involved. Elite service issues at launch, and might not be enough to warrant the $50 yearly premium.