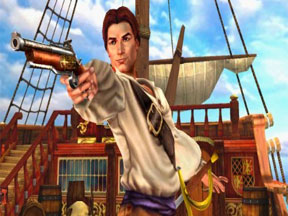 Sid Meier’s Pirates! is well known for being a great game. So of course it would be a great idea to put it on the Wii and add motion controls, right?

You’ll start the game as a young boy whose family owes a debt to an evil count. Not being able to pay the debt your family is being sold into bondage. You on the other hand have different plans. You escape your captors and swear to one day track down your family and defeat the evil count.

After ten years and a lot of work you become eligible to work on a ship heading for the Americas. On your way there, a mutiny is called and you overthrow the captain. After this, the crew decides to nominate you as the new captain of the ship.

Here is where the game really starts to spread out. There are so many different things available for you to do that it might feel a little overwhelming. In fact there is really too much stuff to ever do in one play through. This is where you might want to pick up the instruction booklet and look over what all you can do. Except that the booklet is a cover with two pages in it that only tell you the most basic controls of the game. So now you’re really on your own because the game isn’t about to give you any help. If you’ve played before like most of us have on other platforms, its all the same gameplay, but anyone new coming to the game for the first time is gong to be lost, and may not even enjoy the experience.

It’s best to pick one or two tasks in the game and stay dedicated to them, because otherwise you’ll find yourself as a jack of all trades and a master of none.

You should start off by visiting the local island and talking to everyone there. Here you will be able to find out who is at war with whom. Now you can pick a side and start stealing ships from your enemies. This is one of the actions in the game that should always be done. The more ships you destroy, the higher rank you become within your country and the more perks you get. Things like free repairs and upgrades in the shipyards or being able to more easily recruit sailors onto your ship are perks for famous, or infamous, captains.

The game offers multiple other options of what you can do as well. There is the main story you can follow where you get back your family and defeat the evil count. You could also choose to hunt down the top ten pirates and defeat them to rise in the pirating ranks, or search for buried treasure and lost cities. All in all there are a lot of options available in the game.

Most of the time in game will be spent sailing from settlement to settlement. This can get really boring after awhile, especially when there is always a strong westward wind but no eastern wind at all in the Caribbean. You’ll find yourself never wanting to backtrack just because of how long it takes. This is even more frustrating because you have a time limit in the game. It’s not a definite time, but once my character hit 45 I was forced to retire as a pirate and go live life as a farmer even though I was nowhere near done with the game.

Also there is no way to play the game without the mini-games unless you intend to sit in one spot and never continue.

After all this trouble I played through the game a second time on the easy difficulty. The game was much easier. In fact it was so easy that I never had to try at anything. It left me with a feeling of dissatisfaction as I realized there was no feeling of success in the game all because of failed motion controls.

The graphics in the game aren’t bad. The smooth presentation of characters looks good. My only real complaint is that there are a total of three different animations for any kind of success in the game. After awhile I get tired of watching the same cutscene over and over again.

The music in the game is okay. Yet again though, there is a problem with repetitiveness. Since much of your time will be spent on the open seas, you’ll get to hear the same song over and over again.

All of the makings of a great game are here. In fact a great game is here. It’s just hidden beneath the clunky and unresponsive motion controls. If you’re a fan of pirates and strategy games then by all means pick this game up. Just don’t pick it up for the Wii. Instead grab it on another console for a considerably cheaper price since the game has already been out for six years in most places.