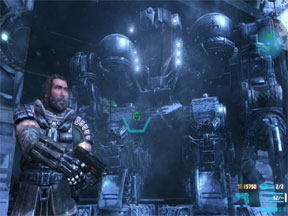 It’s dark, cold and damp. Every footstep rings hollow on the metallic floor, each breath condensing a cloud that hangs in the air that can be barely seen by the inhabitants. The room is dimly lit and gloomy, many areas of the environment obscured by feeble amounts of fluorescent lighting. This is much what I imagine the working conditions to be like for the developer who made Lost Planet 3, a series that seems to be fundamentally different in each iteration. The third installment in the series is a good deal different since it’s more of a character-driven affair.

Lost Planet 3 is a prequel driven by a character named Peyton: A resolute, hard-working man trying to make a living for his wife and child…by living and working on a different planet that’s frigid, barren and infested with hateful monsters to harvest thermal energy. The energy will be what eventually powers a significant amount of the futuristic technology in the previous games (or later, depending upon your perspective since this is a prequel). Rather than being placed in the front seat of a combat-oriented mech with a chiseled, experienced soldier, players get to experience the story of Peyton who is pretty much an every day normal guy.

Honestly, the world building and illustrating of Peyton with the interactions he has with all of the colorful characters who are working in the same dilapidated facility is pretty great. The atmosphere surrounding the characters is easily one of the most alluring factors – the random banter among NPCs and audio logs from Peyton’s wife help tell a very human story. If anything, Peyton will teach you of the power of masculine, immaculate beards.

The blue-tinged and lens flare filled environments are populated by thermal-energy carrying creatures called Akrid that threaten the crew of the Coronis regularly. There are a variety of missions for the player to complete, comprising of rescuing lost crew members, fighting your way through Akrid to reach devices that draw thermal-energy out of the ground or just going around and fixing broken pumps and machinery. Of course, most of these events eventually devolve into, "Go here, do a quick time event after shooting boatloads of ravenous Akrid," but it works well enough considering that there’s a good number of distinctive creatures to shoot. Small, insect-like Akrid seem to be the most common occurrence, but there are larger armored monsters and even wolf-like, aggressive Akrid that feverishly pursue Peyton.

Of course, a lot of these creatures are easier to take on with Peyton’s mechanical rig, but there are plenty of situations where the player is forced to leave the safety of his giant, robotic exoskeleton and then be rapidly forced into combat, such as with frequent flash-freezes that leave the rig frozen solid which forces the player to shoot ice off the mech while simultaneously fending off the angry beasts. Of course, combat in the game isn’t exactly anything that hasn’t been seen by anyone even somewhat familiar with third person shooters. The Akrid do have several types available for the players to amuse themselves with, but they all pretty much share the fact that they have relatively large, glowing weak spots that the player can use to dispatch the foes quickly with weaponry. The weak spots don’t really matter if you’re in Peyton’s rig, stepping on the the rabid fauna or grabbing and crushing them. For the most part, the rig is hilariously unsuited for combat since Peyton’s job, originally, had nothing to do with needing to combat the Akrid: Whether that adds to the charm or not is a very ‘your mileage may vary’ moment.

The combat and general pace of Lost Planet 3 is relatively slow in comparison to a lot of third person shooters that are out there, so don’t go into this game thinking that you’re going to be getting into a game that will exhilarate you with action at all times. The campaign is pretty subdued, told largely through character development and audio logs, while the single player action is a consists of wandering around in the rig, dodging lava shots and squishing anything that skitters on more than two legs while running around the environment, weapons in hand, shooting, well, just about everything.

There’s a different selection of weapons that you can purchase and upgrade for more efficient murdering of the local wildlife, which aids the on foot combat a good deal, but outside of tackling some giant Akrid, the mech the combat doesn’t seem to live up to what the previous Lost Planet games established, since it mostly resorts to a formula of quick time events. Of course, there are times where you’ll be fighting with human opponents or chipping away at behemoth monsters on-foot, but for the most part the formulaic quest system offers very little incentive for actually wandering around the environment and exploring for items, so even with the occasional big fight, it all rings a little hollow. Peyton at least gets a pretty awesome grappling hook which helps in traversing the environment, but can also be used effectively in combat by getting you out of bad situations or behind things that don’t have opposable thumbs or understand how grappling hooks work.

The graphics of Lost Planet 3 are impressive. There’s a little bit of frame rate loss evident in the PS3 version that may or may not exist in the other versions, but it’s extremely noticeable when there are plenty of gas clouds of Akrid on screen to kill Peyton, which is primarily the time when any player would want the frame rate to be at its most consistent. But, as mentioned before…the graphics are ridiculously pretty and polished, especially when viewing the character models.

The sound effects are likewise superb – there are several effects for piston pumps and mechanical crunches for many of the actions the rig takes, and even something so simple as opening the door to exit the Coronis and enter the wasteland is accompanied by a cacophony of dissenting sounds from the hydraulic locks releasing, gears spinning and chilled-frozen metal releasing.

It’s really a treat to have such attention paid to the sound effects, and of course it’d be a shame to not even mention the great voice acting among the characters. The voices for many characters are quite fitting, and a lot of the NPCs are voiced by well-known actors or voice actors such as Laura Bailey. (Name five games or anime series and the odds are she voiced a character in at least one of them.) A lot of the banter among characters leans toward the humorous spectrum, which really brings to life the eccentricities of people who are forced to lived with one another with very little connection to the outside world. The characters do serious-face when necessary, but there are more than just a couple of laugh out loud moments in Lost Planet 3, no small thanks to the great writing that makes such believable character interactions.

To summarize: The combat of Lost Planet 3 won’t blow you away if you’ve ever played a third person shooter before. It’s basically every third person shooter you’ve ever played and it rewards you for shooting specific, glowing targets on the enemies that try to eat your face. The rig combat is a little bit slow and either involves stepping on anything that moves or partaking in a good number of quick time events, which are never actually all that fun. There are some more unique quick time events, such as when offered the chance to speed up the repair of equipment, but they wear out their welcome expeditiously as well.

Lost Planet 3 plays a lot more like a survival horror or suspense title since Peyton is a little more squishy than the protagonists previously exposed in Lost Planet titles, but that little bit does show what the game does well, because when away from the rig and low on ammo it can be pretty tense to be surrounded by tons of lava-spewing Akrid.

Overall, Lost Planet 3 isn’t a bad game, just extremely average. It has great dialogue and character interactions, but that only carries the game as far as the player enjoys the banter and personality quirks of the crew members, and while the shooting on foot and exploring in a mech is fun, it can tend to be a bit tedious over the course of a 15 hour play-through.