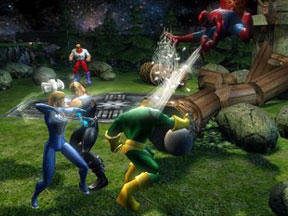 Coming off of the success of the X-Men Legends two-parter, Activision and Raven Entertainment decided to go all out with their latest release, Marvel Ultimate Alliance. By offering a total of over twenty of Marvel’s most well known superheroes (as well as some I admit I never heard of before, such as Deadpool,) the game feels more like a Marvel All-Stars brawler, a feat that hasn’t been done since Capcom’s Vs series back in the late 90s.

And why would all the most well known Marvel Super Heroes be used in this game? It is because in Ultimate Alliance, Dr. Doom unleashes a master plan using all the members of the Masters of Evil, who start off by attacking the S.H.I.E.L.D. helicarrier.

In a last ditch effort, Nick Fury commissions a task force of superheroes led by Captain America, Spider-Man, Wolverine and Thor to stop the attack on the carrier. However as it is severely damaged, the newly formed Ultimate Alliance must set their headquarters in Stark Tower.

It is here that the Ultimate Alliance must seek out fellow superheroes to stop Dr. Doom and the Masters of Evil in their secret operation.

Anyone who is familiar with the X-Men Legends series, or any Diabloesque action RPG in particular will feel quite at home with the game. Ultimate Alliance’s gameplay consists mostly of dungeon crawling and fast paced beat-em-up action complete with each superheroes special abilities.

I always got a kick of using Captain America’s shield, throwing it to a crowd of drones, going in and brawling them, and having the shield return to finish them off. To me the game feels like a combination of dungeon crawling a la Gauntlet with the destructive anarchy of Rygar: The Legendary Adventure.

Controls on each character are highly customizable, and different heroes can be selected on the fly, but only for the four characters that are available for the mission. Only via select S.H.I.E.L.D. portals can reinforcements swap the place of the current party.

As the series progresses, not only can new moves be picked up, but also new costumes (such as the USAgent skin for Captain America, Spider-Man’s black symbiote costume, or Wolverine in his brown hooded costume compared to his post movie white t-shrt, and special bonus missions that center on a unique superhero. The variety of customization options helps to break up from the somewhat repetitive combat.

The characters and settings are quite amazing on the Xbox 360 version we reviewed. While the detail might lose a bit when up close, it is still quite impressive with all that is going on. Slowdown is apparent when the action gets too chaotic, but it’s nowhere near distracting.

Comic book fans will appreciate the artistic quality. Voice acting is also good most of the time. There are times when there is some cheesy dialogue, and for an X-Men fan like myself, it would have been heaven to get Hugh Jackman to once again reprise his Wolverine role, but beggars can’t be choosers.

Ulitmate Alliance is available on virtually EVERY current and next gen system available, including the portables. The Xbox 360 version was tested, but the Wii version features motion sensitive controls via the Wii-Mote. So if you like really throwing punches, this is your game for the Wii lovers out there.

Marvel fans will easily be able to find heaven with Ultimate Alliance, as will action RPG fans in general. It will be scary to see how Activision and Raven can improve on this year’s effort.