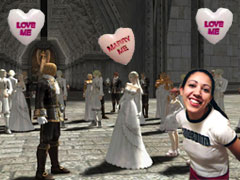 Gaming's never been seen as the most romantic of pastimes, but is that really how it should be? Why is our greatest hobby devoid of all hearts, flowers and grand gestures of love? On the week we celebrated Valentine's Day, or some of us wept into our pillows and cursed the very name of St Valentine, I'm casting an eye at romance in games.

The games industry is always aspiring to the lofty heights of the movie industry and even likes to promote itself as art. However, film and art of all kinds, whether it be painting, poetry, literature, dance or theatre all explore that most human of emotions – love.

Just think, how would teenagers relate to Shakespeare without Romeo and Juliet? What would Casablanca have been without Rick and Ilsa? Swan Lake would be a mere study of nature without the prince and tragic death. Imagine a world without Gustav Klimt's The Kiss – it would be a sad and empty world indeed and students would have big gaps on their walls.

From high art to Dawson's Creek; it all deals with romantic love and the human condition to endlessly pursue it. The games industry has shied away from affairs of the heart. Perhaps gamers are intrinsically unromantic creatures. Or perhaps our very passionate heart is being overlooked.

I think all our hearts swelled when Ico hit the scene. This is a game that depended on our believing in the strength of the relationship between the girl and the boy. The theme of innocent love had even the most hardened gamer wiping a sentimental tear from their eye as the credits rolled.

Harvest Moon is one of the few games that features marriage and requires players to pursue the object of their affection. Despite this, I think it would be a stretch to call it romantic.

Games have plenty of sex appeal and by that I of course mean cleavage, panty shots and wobble. Lara Croft has sex appeal, but not a jot of romance – even Indiana Smith had a love interest. The DOA girls hold their own in a bikini, but in spite of the implied girl on girl action, there's still a distinct lack of romance.

I suppose there was Rose and the much maligned Raiden in Metal Gear Solid 2, but I seem to remember the romance did little to woo gamers. Nice try Kojima, but alas Rose was the only person people hated more than Raiden.

Surely love is life's greatest mystery, yet games avoid it altogether. All this talk of publishers investing in great scripts and paying actors vast sums of money for voiceovers, but we still have no real depth to our games. It's not just romantic love that's missing out, but this is a tribute to cupid and roses and those pink padded cards with teddy bears on.

Even Star Wars had a love story! Now you can't say that that was a soppy movie for girls to drag boyfriends too under duress. Love is a universal theme and can be used as a great dramatic motivator. People do bizarre and amazing things in the name of love.

Love doesn't have to be girls getting flowers and being asked to the dance. Just think Bonny and Clyde or Mickey and Mallory – both fantastic examples of how love stories can be kick ass.

Love can turn a hero into a villain in a rage of jealousy or tear a hero in two. Think of any comic book hero and they're all lovelorn saps. What would Spider-man be without Mary-Jane or Daredevil without Elektra and what would drive the Silver Surfer if he didn't have his love for Shalla-bal?

I think there's room for more love and romance in videogames to drive our heroes to new heroic heights and perhaps even introduce more heroines.

Most played: The Elder Scrolls: Oblivion