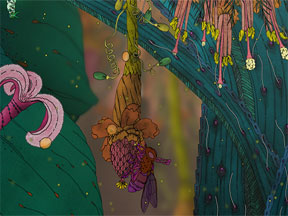 Editor’s Note: Chella couldn’t stop raving about Morphopolis during the pre-holiday GiN Lounge show, so here is her full review on this beautiful game.

Morphopolis may be a simple hidden object game, but it’s one that invites into a stunning new world and creates an almost meditative environment. Unfortunately, the beautiful graphics aren’t supported by engaging puzzles, making it at times a frustrating endeavor. That said, visually, it’s the most beguiling game I’ve played all year.

Lying in the grass on a warm, summer’s day, the rasp of crickets and the hum of bees, as you peer between the leaves, you discover a microcosm, teaming with life. Morphopolis takes you on a journey through that world. This game is so gorgeous, that I spent the first five minutes just looking at the title screen. The pictures don’t do it justice. You have to see it in motion to experience the full wonder.

Each screen is like a psychedelic walk through the undergrowth, except this is the nature of Alice’s Wonderland. I half expect to find a caterpillar smoking a hookah. The scenes are rendered like a paper theatre or a pop-up book, with layers receding from the blurred foreground, back into the forest of stems, flowers and seed pods. The highly detailed plants offer splashes of violet, teal, mustard yellow and rhubarb pink.

Over the top of this visual feast, Morphopolis offers an ambient soundtrack of gentle digital percussion and plucked strings. As well as the mesmerising music, we get the whirr of insect wings, and’a chorus of’hums and chirrups. The audio adds to the languorous atmosphere of the game.

The game is divided into five chapters. The aim is to unlock puzzles by clicking on hidden insects and items. When you first look on a scene,’your eyes are overwhelmed by the intricate throng of plants, but after a few moments, a giant grasshopper comes into focus, resting on a branch. And there’s a blue bumble bee or a stag beetle in the corner.

If you click on the correct creature, it may animate slightly, waving a delicate feeler or a cricket may walk through the scene, as you drag your mouse or finger to direct it. Clicking on the creature again will make it chirrup, which opens a seed pod and the seeds must be collected to open the puzzle.

It’s the puzzles that let Morphopolis down.’Quite often, the puzzles are on the easy side, but at times, I’ve spent hours just trying to figure out what I’m supposed to do. Presented with a row of fireflies with tails that light up, the lack of feedback or clues left me at a loss for hours. It turns out it was a simple case of memorizing the sequence and repeating it, so once I figured out what I was supposed to do, the puzzle was completed with ease. But as you progress through the game, each chapter has more, increasingly complex, puzzles to find.

The best part of Morphopolis is the gorgeous world the team has created and unfortunately, the puzzles take you out of that and hamper your ability to return. There is very little to help you if you do get stuck, and once in a puzzle, there is nothing at all to suggest what you have to do. With such a wondrous world, yours for the taking, it’s such a shame that the puzzles feel like a hindrance, stopping you from enjoying it as much as you want to.

That said, I still think Morphopolis is worth a play, just because it is one of the most beautiful games I’ve ever seen.