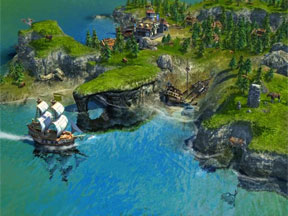 I had pretty high hopes for 1701 A.D., given that you were colonizing a new world in the 17th and 18th centuries. I guess I had visions of Civilization dancing in my head. And while 1701, the sequel of sorts to 1602 A.D., did not really disappoint, it also did nothing that I had not seen a million times before. In a sense, it is the perfect generic simulation, great for whiling away the hours when you are bored, but nothing that you would excitedly bring to the next computer game party to show off to your friends.

You play an explorer who is given a commission by the queen of your land (I think the queen is supposed to be Victoria in her younger days but she is just ‘the queen’ in the game) to go out into the unknown and colonize new lands.

The first part of the game has you in your ship sailing around a darkened map through the fog of war. You will quickly find several islands and can pick the best one where you want to land your settlers. This is a pretty fun part of the game because you can’t really explore the inland areas of the island, so even though you think your chosen island may be idyllic, you never really know what you are going to get until you build your first building, which is a harbor and trade house, and take a look at your new realm.

Assuming you are playing the main game, then all the islands are randomly generated each time, which does lead to a lot of re-playability.

No two games are ever going to be the same. I was kind of hoping for a bit more of a historical angle in the game given the presentation on the box. The islands are all unique but also very odd. On one island you might find a running heard of moose while on the one right beside it you will find zebras for example. What crops can and can’t grow on each island is also random. Again, this adds to the replay factor, but detracts from the strategy side since everything is basically random.

A good aspect of the game is the fact that there is a robust tutorial consisting of eight lessons that go over every aspect of play from basic movement commands to how to set up plantations on nearby islands to grab a needed resource that your main island is lacking. Although going through each tutorial is a bit like going to school, if you are left with any questions about how things work, it’s your own fault because it’s all pretty much covered in the tutorial.

In addition to the tutorial, there are also quite a few challenge missions to play. These are shortened games on purposely-rendered maps. You might have to rescue some stranded settlers who crashed in a storm, or brew enough beer for a celebration. All of these challenges are scripted and are pretty fun to play if you only have a short time and want to get some sim action in before going back to work or whatever.

The gameplay consists of the standard resource-gathering theme found in most simulations. You have to build fishing huts to go out and get meat, lumberjacks to chop down wood and miners to collect clay. Some resources require chains of buildings, like a sheep farm and a weaver to make cloth. It becomes a real challenge when you don’t have a needed resource in your chain available on your island, like if you can’t grow grapes to make wine. In that case you can either trade with a roving merchant (who will charge you an arm and a leg to get what you need) or you can go out and put up a plantation, though not necessarily and entire settlement, on another island where the missing link can be found. By setting up automatic trade routes with your ships, you can keep the needed resources coming in at a steady rate.

The game, and I think this is a mistake, puts a lot of emphasis on transporting your goods down roads. I don’t really mind that part of it, but you only have one little tired guy with a wheelbarrow who can come out of your trade house and collect resources. Sometimes he picks the stupidest things to go and gather too, like collecting a load of fish when the mission goal is to make a lot of cloth. And you have no choice but wait for him to amble down the road and get the worthless resource when you really need him to grab something else. I think this really slows down the game quite a bit. You can add more trade houses, but you only get one more wheelbarrow guy for each one, which does not really speed up the process much, especially in large cities. There should be a way to upgrade the collector guy to move faster, hire more workers or simply have each business move the goods to common storage on their own.

Graphically, 1701 A.D. is quite good. We are talking about simulation type of graphics and not a photo realistic shooter, but these are certainly on the high end of the scale as simulations go, though this is more or less to be expected these days for almost any modern title that expects to sell more than a couple copies.

There is a little bit of combat in the game, though this too is a bit generic. If you have bad relations with your rivals or the natives, you can be attacked. There are also pirates that roam the high seas. You can counter this by putting up guard towers and building military units. This is mostly just generic fighting as 1701 is not a wargame by any stretch of the imagination, but it is nice to see that combat was included in some form.

One of the more unique aspects of the game is how you can set up a scenario to play. You can activate or disable any other group of people from your game. So if you don’t want to be bothered by pirate attacks or even be nagged by the queen, you can disable them from the "create game"menu. This way you can turn all possible hostile forces off and have a game without any combat, or activate everyone for more of a challenge in your tiny island kingdom.

In the end 1701 A.D. is a good game and earns 3 1/2 GiN Gems. Those who love to play simulations will enjoy it to be sure, though it really offers nothing that would tempt new people into the genre. It reminds me a little bit of the Tropico series, only without all the humor. Still, 1701 A.D. is good game for a rainy day, though probably won’t make the top of anyone’s favorites list.