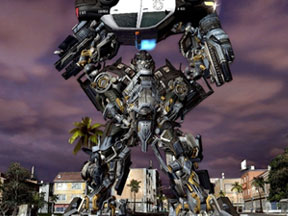 I loved the 1980s Transformers from the moment I first saw them and owned many of the Autobots, but few of the Decepticons and rarely missed an episode or even the movie, though I was sad when Optimus Prime was no more, and my addiction with the show slowly faded away, with a few peaks as new Autobots or Decepticons joined the ranks.

I approached the movie with some trepidation, and was thus pleasantly surprised when it was not bad. Having seen the movie before the game arrived on my desk, I popped the game into my Xbox 360 with high hopes for some good fun, but in the end I find myself a bit disappointed. At first I thought I had encountered GTA for the Transformers as I explored what seemed to be a good sized city, but the city and the missions just did not live up to my expectations.

The first thing you do is choose sides. I started out at the Autobots so I will start with my thoughts there, and come back to the Decepticon missions which I tried second. The movie and the game open with Bumblebee as the only Autobot on earth. Your first mission is to take out some Decepticon drones (What?) that are landing in the city. So you drive over to where you need to be, represented by a green dot on the mini map on your screen. This is cool because it gives you a chance to try out your driving skills and the nitro (power boost) option. While I thought I would be having a shoot out with the drones, it – like most of the fights in this game – ended up as a melee brawl.

Your second and third missions are to protect the kid before the other Autobots arrive. The second mission is more of a driving mission. When you get to the kids house, in a cut scene you hear that the kid is going to go car shopping in the morning. Well you need to get there before the Decepticon drones that happen to walk up at just that moment get there. You chase after them in car mode firing your weapons to disable them, which causes them to transform into robots.

Once you get the first one to transform you chase after the second one and once you make him transform you kill him and then go and beat up the other one. That is when three more pop up off your map and you have to drive around and get them before they make their way to the used car dealership. Again this comes down to a little bit of shooting and a lot of melee combat. This is kind of a theme for the Autobot missions, though there is some shooting of towers and some driving missions thrown in for good measure.

I acknowledge that bumblebee is not the toughest of Autobots (at least he is a cooler car now), but even when you get to some of the tougher Autobots or even to the ultimate fighter Prime, the fights are more melee, as often as not your big guns are useless against the other guy’s shields. While I found the opening Autobot missions to be fun, up to a point, I was disappointed in the level as a whole because instead of being given the time to explore the city, I was relentlessly pestered by Optimus Prime telling me to get to my next mission. Of course later I realized that this is because there is nothing else to do besides the mission!

If you have seen the movie then you know that the Decepticon missions are more combat or blow things up oriented. You start out as Blackout (Helicopter) and you fly into a military base and need to shoot everything in sight. Now we are talking! Though my favorite missions are with Scorponok who is a robot scorpion (he does not transform) who is pretty tough above ground and who moves like lightening when he burrows under the sand. But once you stop beating up on the US Army, you start encountering Autobot drones. I guess they need to throw something at you, but drones" I much prefer the missions where Autobot faces Decepticon.

But enough griping about these drones that popup from nowhere. The missions do a pretty good job of following the movie, is just that I wish there was more use of the guns and a little less melee, but I am digressing again. Also to be found on each level of the game are five faction shields and 100 "Allspark" collectibles.

The controls are surprisingly easy, though as a mostly melee game, there is a lack of any kind of combo moves. You can shoot, you can punch and you can pickup and throw things and of course you can transform, which is what it is all about. The graphics are pretty good at the start of the game but the rest of the world is pretty blah.. The cut scenes seem to take a step back from the good graphics of the game, to the level of the early PS2 titles.

I must assume this was done for style, but I don’t know the reasoning behind this. Finally the voice acting is of course excellent, but then it is hard to go wrong with the stars of the movie also speaking for your game. Though even here, it does get old after a while, and I am thinking of the replay value, which is pretty slight.

Overall I had a tough time scoring this because on one hand it is the transformers, and they are so cool (4 GiN Gems) and on the other hand the game -while pretty good- did not live up to my expectations (3 GiN Gems). And in the end I split the difference with 3 1/2 GiN Gems. The story transition from movie to game was good, the graphics of the transformers was good and of course the voice acting from the movie. Sadly the missions, the levels, and the focus more on melee and less on the big guns pretty much kept this game from being great, at least in my book.