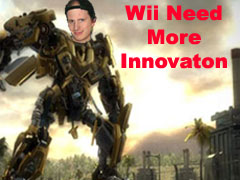 Less Than Meets The Eye

GiN columnist James Maddox wrote that developers making games for the Wii really should put some extra effort into their games, and not just try to port them over from a different system. This may take a little extra effort, but the Wii is really a different game and a different game experience than you will find on other platforms. Nowhere does this point ring more true than with The Transformers game. While Chris Richards covered the game quite well on other platforms in his review this week, I thought I should write a bit about how the game was never really designed properly for the Wii. But let's start at the beginning.

When I saw the movie Transformers for the first time on July 2nd, it was in a crowded theater in Hickory, NC alongside my girlfriend who had no interest in the movie to begin with. Two and a half hours later we both came out of the theater with our expectations far exceeded. Not only did Michael Bay redeem himself (almost) from past mistakes such as Pearl Harbor, but teamed up with Steven Spielberg and created a high energy cinematic masterpiece with enough humor to convert non-Transfans like my girlfriend.

However, if I played the game before the movie, I might have had the same initial impressions that she did. As much as I loved the movie, I hated playing the game. While Transformers: The Game might follow the movie's storyline closely, it is the execution of the game that fails. What makes it fail the most is the frustrating control system that the Wii provides.

During combat either the Wiimote or the Nunchuk control can be used for combat. However, the Wiimote is also used for camera control. Now for many Wii players like myself, we would be used to using the Wiimote to strike after playing games like Twilight Princess, but here it becomes an exercise in pure frustration.

There were several times I tried to fight hand to hand, only to have the camera zoom in so tight on Bumblebee that I was not aware of my surroundings. Also, when I tred to turn to locate my target, it takes a while to get to them. Add to that a camera that tends to get blocked when the action heats up, and the game becomes an exercise in frustration.

Visuals are not up to the level of other Wii titles. In fact, the game almost looks like it was ported off of an early PlayStation 2 game, something Chris Richards mentioned in his review. And not only that, the frame rate does tend to take a huge hit when a lot is on the screen. I would have expected a lot more coming from the Wii. Sure it's not as powerful as the 360 or PS3, but still it should look better than a PS2 title.

The good news is that a majority of the film's voice cast has returned, and it is good to hear Frank Welker again as the voice of Megatron (as opposed to Hugo Weaving in the movie, who I admit wasn't as bad as I thought he would be.) Peter Cullen actually sounds more like the Optimus Prime of old here compared to the movie version (although his line of "Sorry, my bad" still cracks me up no matter how many times I hear it.)

However, I felt both Shia Lebeouf (Sam) and Megan Fox (Mekaila) didn't sound as good as they did in the movie. Shia's version of Sam in the movie, especially when talking with his parents, was at the threshold of comic genius. Here he just sounds like he's reading lines from a script.

I really wish Traveler's Tales took more time in the Wii effort because to me it just feels like another movie cash-in. Best idea is to skip the Wii version, go see the far better movie, and use your $50 to purchase the latest Optimus Prime Leader Class figure. You'd get more enjoyment out of that.

So if I were scoring the game based only on the Wii version, my ratings would be as follows:

Waiting for: Space Giraffe (Ok, this is getting tedious. Who cares about Spyglass Board Games? I will admit though I am interested in Marathon, but give me what I want! Are you listening, Major Nelson?)