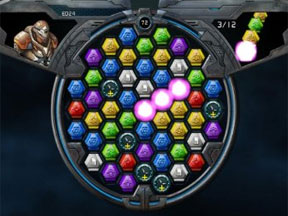 I knew within the first hour that this game was going to be a hit.

I downloaded Puzzle Quest: Galactrix and was playing for about 30 minutes when my wife came home and asked me what I was doing. After my two-minute explanation, she asked if she could try it out. I let her play one game and then when she said she liked it and wanted to play for a bit, so I restarted the whole thing so that she could get the back story. Although she probably didn’t need it, the tutorial quickly showed her how to play. Once that was done, I stepped out of the room.

I stopped back by twenty minutes later and given the look in her eyes, I correctly figured that I should probably get dinner started. I served it to her in front of the TV while she was still playing. In the end I think she spent the better part of three hours or so glued to the TV playing this game.

Although this is a puzzle game, there is a bit of a plot. After a war destroys Earth, four mega corporations arise and assume control. The survivors of the war head into outer space to find new lives and other races. Puzzle Quest: Galactrix begins hundreds of years after this. At the start of the game you choose to be either a male or female pilot of a ship in outer space. Not a whole lot of choice so far, but be patient, eventually you will get to customize your ships with cool weapons and other gear.

Yes I did say ships because eventually you can purchase or find plans for and construct other ships, and you can have up to three at any time.

At the beginning of the game you don’t really know much about the plot but eventually you learn that one of the mega corporations caused a horrifying scientific accident that has provoked another race to attempt the extermination of humankind. As a human, naturally you want to stop that from happening.

After a couple of tutorial missions you even begin collecting a crew, some of whom add some great comic relief to the game.

Your first mission is to find some pirates and attack them. Your ship follows your cursor around and once you click on a planet your ship heads there. If you find the pirates you attack. Combat is on a huge match three board. Different color matches help you with defensive power or attack your enemy.

Just to mix things up a bit since this is outer space, the puzzle pieces drop in from what ever direction you swapped the pieces. As you improve your ship you can also collect colors to activate special things like big guns. And as always, big guns are really good, so you should try to get enough colored matches to fire them. If you can, your enemy is in big trouble, especially if you have managed to drop their shields.

Even though you can have three ships, you can only take one into combat. Some ships that you buy or build are faster and let you outrun combat while other have more weapons and shields.

Besides combat your ship can also carry cargo gained from mining. What you get depends on another match three game where this time you try to get as many matches as possible within a time limit.

There are also leapgates that link regions of space. Unfortunately they have all been locked, so every time you want to use one you have to hack it. This is done with another match three game (surprise) but this time you have to match certain colors to break the lock, and like with mining you are on the clock. So there is a lot of match three gameplay, but it actually changes it up a bit so that you are not doing the same thing over and over again like we have seen with other titles.

Though you might not expect this from such a game, Galactrix has a great sound track that really sets the outer space theme. I just wish they had more voice acting. After the great opening, most of the rest of the game is all text.

Overall this game was way more then I was expecting from a simple match three title. The idea that you have to consider the direction you are moving your pieces as well as just trying to match them adds a huge amount of complexity to the game. As an added bonus the story is extremely engaging. The variety of mini games and the customization of your ships really keeps the content from getting stale even over multiple hours of play. All this wrapped up has made Puzzle Quest: Galactrix a huge hit in my house.

It earns 4.5 GiN Gems, one of the first puzzle games this year to achieve this feat.