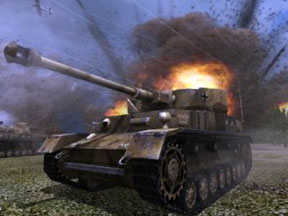 Order of war was released in November, and GiN normally reviews games as close to the date they come out as possible. That didn’t happen with Order of War, because we couldn’t get it to run on our gaming gear. Despite having several machines at and above the requirements, the title locked up every time we tried to load a game.

Eventually GiN upgraded its testing lab with some brand new gear, and we finally got it to work on a system with Windows 7 and a brand new nVidia card. One thing, all our previous test systems had high-end ATI Radeon cards, so perhaps the problem was that the game really wants an nVidia-equipped rig.

Order of war is a lot like one of my favorite RTS games, Company of Heroes. However, the hook for Order of War is that you are commanding entire companies instead of individual squads. On some missions, you are pretty much in charge of divisions.

Now, armchair generals are used to commanding huge groups of troops, even entire armies. However, this is mostly the realm of the turn-based strategy game. Titles like Hearts of Iron III do that type of strategy really well, but you have an infinite amount of time to make your moves. In Order of War, other than pausing the game in single player mode, you will need to react very quickly to what is going on all around you.

I was initially very excited about this new concept, and still think that it could be well done. After all, I’m the type of guy who reads The Library of Congress’ 1,000+ page World War II Companion for fun. However, Order of War has too many flaws for it to be truly enjoyable. A lot of these problems could have been fixed with some simple interface and AI changes, but isn’t that always the way of things?

The biggest problem I have with a game like this is that by giving you control over such large groups, you actually lose a lot of the strategic sense of warfare, and almost all of the tactical strategy. Especially in the campaigns, it’s mostly a matter of selecting a huge mob of troops and telling them to swarm over an enemy. And you have a general yelling at you the whole time, so you don’t even really get a chance to decide what objectives to take. The general will scream "Take out that radar installation with these troops!" and you will select them, point them at the facility and sit back while they walk up and take it over. You don’t really do anything at all other than pointing out the way.

Your strategic decisions are limited to rock, paper, scissors types. If there are anti-tank guns, you swarm in with infantry. If there are tanks, you tell your airplanes to take them out. And infantry are destroyed by armored vehicles. There are a couple other things you can do, like telling your infantry to jump into a trench to take cover, but even that is frustrating because each man insists on having a lot of space around them, so that half your company is often standing around (sometimes IN FRONT of the trench) getting shot at while their buddies hunker down in spacious accommodations nearby.

The AI is also woefully inadequate for a game of this scale. God help you if you need to get people to cross a bridge or walk down a street. Since you can’t tell individual squads what to do, you have to order entire companies to follow your orders. The game should be called Traffic Jam at that point. Tanks will start rolling across the bridge, fighting each other for position and not really moving. Meanwhile if some enemy with a machine gun pops up, the entire column will stop to shoot at it, which jams up your entire army even more.

And forget about flanking or actual unit techniques. They don’t work here. If you are assaulting a trench full of men, common sense (and a bevy of other games like Brothers in Arms, Men of War, ect.) teaches you to move a group of people to a line parallel with the fortification. Then you can shoot down the trench line and the people inside don’t have cover. But you can’t make that happen here. If you order a group of men forward and another group to move to the side of the trench, the second group won’t move there in any intelligent way. To make it happen you have to set up a series of waypoints to have them carefully stroll over there. And even if you get them into position, the direct fire doesn’t seem to have any extra effect at all on the enemy in the trench. Just do a mobbed frontal assault. It will get the job done more quickly and you’ll take the same casualties.

There is a feature that lets you "view the action in cinematic detail" which could have been really cool. But it should have been left out. The detail of the troops and vehicles is basic at best. If you zoom into Company of Heroes, you can see things like mud on your vehicle’s tires, webbing on the helmets of your men and individual unit markings. Here, everything is blank and undefined, even at the highest graphical settings. All soldiers look and move like carbon copies of each other. Zooming into a squad shows guys in three possible positions. They will either be standing straight up, down on one knee or lying prone. There are no spectacular death scenes. You watch guys charging forward and bullets hitting the ground around them. Then one guy will fall over. It’s almost like a bunch of reenactors playing war. I realize that graphical quality had to be dialed down because of having so many units moving, but it’s never good to put a big red button in your game that says "Take a look at our flaws!"

And the camera button won’t zoom in where you want anyway. If your infantry squad is doing something interesting and you hit the Cinema button, often times you are taken to a view of tanks firing somewhere far away, even if you aren’t in control of those troops.

Pile onto these many flaws an interface that is completely inadequate for the scale and you have a recipe for frustration. Take the D-Day campaign mission for one. You are given command of every troop on the beach with orders to "Move them inland to the shale!" Fair enough. You select the biggest group you can with plans to move them forward. But guess what? They aren’t grouped in any logical order in your command window.

Thankfully, the skirmishes are much better designed than the campaigns, if only because you can build and control your armies however you want, setting up intelligent command groups and assigning them quick keys (a skill not taught in the tutorial for some reason). There still isn’t too much strategy involved, but at least you are in greater control of your destiny. Unfortunately, there aren’t too many skirmish maps with the core game.

A final gripe is that you need to connect to the Steam service to play, even though you have the DVD install disk in hand. I love Steam and don’t have a problem with this. I download games from them all the time. But if someone goes out and buys a physical disk from the store, they don’t expect to have to connect to an online service to play a single player game. Some people will be upset with this, or might not have a broadband internet connection which you really need for Steam, so I thought I would mention it.

Order of War could have been a lot better than it is. I have to give serious props to Wargaming.net for trying to mix turn-based grand strategy with more squad-based capture the flag type of real-time action. I wouldn’t call Order of War a failure, but perhaps more of a blueprint for how this concept could be done more successfully in the future if they or someone else wants to learn from their mistakes.