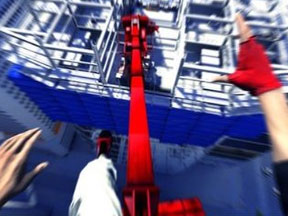 My first introduction to parkour was a Volkswagen commercial, and even with those few seconds of awesome footage, I knew that this sport would have to be incorporated into a game someday, and that day has come with Mirror’s Edge.

From that car commercial, evidence of a growing parkour trend has sprouted all over the world. From the French flick District B-13 to a fantastic opening in the Bond film Casino Royale, the sport of jumping from impossible heights and utilizing existing architecture to pull off amazing stunts of acrobatics has definitely been keeping peoples’ attentions.

With this new trend in full effect, EA posted a video that began with the disclaimer: What you see in the following footage is all in-game play.

What followed was a testament to how pretty the next-gens can make a rendered level of gameplay appear and just what new heights EA was pushing their game developers.

The build up for Mirror’s Edge was pretty unbelievable in those weeks following the video’s release, but as time wore on, the hype for this game gradually faded, and as the release day approached, a lot of people were already over it, a sad outcome for the gaming populace.

While the short-length story to Mirror’s Edge is nothing to rave about (it’s your classic dystopian future with a who-done-it to keep the script moving along), the levels and feats that it pushes you toward are very impressive.

However, the real meat of the game is not to be found in story mode, but in the game’s time trials.

With these trials, you are given a level and a goal to reach. You can try to beat your own best time, or you can go online and choose from other top times. By selecting individual time goals, you are joined in the level by a red ghost, which represents the other player’s movements and decisions, letting you see their strategies and failures first hand.

So while that game is not technically a multiplayer, it’s as close as you can possibly come without being branded with the multiplayer label.

Gameplay is another shaky subject for Mirror’s Edge, because in their publicity video, EA pretty much showed all the major moves that can be found in the game, raising gamer expectation to a new high and then not being able to show us anything beyond what we’d already seen. My perspective, of course, but this factor did cause a direct blow to the game’s acceptability.

Also, on first play, the controls still felt very stiff for a game that associates itself with "The Flow." However, this effect is bested as you become more comfortable and knowledgeable with the control schemes, and soon vanishes as you are able to navigate your character, Faith, through each stage.

After that, the greatest accomplishments that Mirror’s Edge brings to the table come through innovation in both ambition and visual appeal.

EA truly outdid themselves with this experiment, and for the titles that this venture will aid in spawning for the future, I am very grateful.