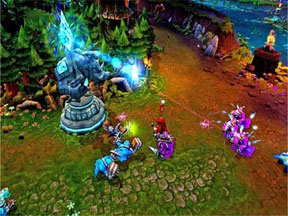 Wow, has it been a long time since I’ve done a proper review and not a little Time Waster type. It feels like my time for serious gaming is just slipping through my fingers, but all is not lost! There is one game out there that has pulled me back into the world of hardcore gaming, League of Legends (dun dun dun).

Now by no means is League of Legends (LoL from now on) a new game, in fact the game has been around for two years now! So why did it take me so long to get around to playing it? Well there are a lot of reasons, but the easiest one to explain is procrastination, and the fact that developer Riot Games recently re-released it themselves to work better with modern systems. I know it may sound ridiculous to procrastinate playing a game, but it does happen. Enough with my petty excuses let us talk about the story of LoL.

The basic idea in LoL is that all of these powerful beings have been pulled from multiple different worlds to compete in the League of Legends. Think of the League of Legends as a fantasy world version of Rollerball mixed with a tower defense game. From here the story of the world doesn’t really matter. What does matter though are the stories of the champions. Each Champion has their own lush back story of why they joined the League, their connections to other champions, and sometimes what they do when not fighting in tournaments. With 85 champions currently available and more on the way it isn’t hard to get lost in the lore behind LoL.

Let’s switch gears and talk about the gameplay of LoL. This is a bit of a huge topic so I’m going to break it down into smaller paragraphs for my sake and yours.

Battle in LoL is a little different than the run of the mill MMO. Instead of leveling up one character over grueling hours of gameplay LoL has us do quite the opposite. Instead there are self contained matches where the Champion always starts at level one (excluding Dominion). Two teams of Champions will be fight against one another to try and force their way into the enemy base and destroy their Nexus. To do this though they’ll have to push through enemy champions and minions and destroy the turrets for each lane. It doesn’t sound like that hard of an idea but to give it a little scope, a normal match last anywhere from 20 minutes to an hour and a half depending on how well the team works together.

So I mentioned that Champions have started at level one right? Well the Summoner (thats you) on the other hand does level up over the span of multiple matches. Wining a match will award each player XP and IP. XP as you might guess is the fuel for leveling, and IP is game currency that can be used to buy various things from the shop.

Increasing the Summoner level will also unlock more Mastery Points and Rune Slots. Mastery Points work like a tree branching system found in most western RPG’s. Distribute the points into different abilities to custom fit the champion being played. Rune Slots are where you can place Runes bought in the game store to increase the stats of whatever champion is played as.

Inside the shop we find a lot of different items that area viable to purchase, for instance Champions. See Champions aren’t just free to use, after all how would Riot Games make money if this game was entirely free? What is does do though is that every week, ten Champions are Free to Play. This gives newbies the chance to try out all sorts of different play styles and allows them to save up IP to purchase a Champion that they really want.

Maybe all this hard work and dedication is going to take away too much of our time though. If that’s the case we can instead use Riot Points (RP) to buy Champions. RP is an in game currency that is purchased with real world money and is necessary to gain some items in game, mostly different Champion Skins.

Whew, finally finished with the gameplay. Now onto the graphics and sound!

Graphics in LoL aren’t bad at all. The game is filled with plenty of beautiful characters and each character has three or more extra skins to add to the flavor. Also the battlegrounds, while not amazing, do offer a great amount of detail. For example the autumn version of Summoner’s Rift has a set of coffins in the lower part of the screen. Inside of these coffins are a few different Champions that were cancelled before they ever became playable. I enjoy the small details like this.

The audio in LoL isn’t exactly what I expected. There isn’t really any music playing (okay fine the Title Screen has some), which is kind of strange for a game filled with battles, in the end though I found this to be to my advantage. I often play with a group of friends and we use Skype to communicate so not having to shut off background music every time I go into the game has turned out to be very convenient.

Also all of the Champions in LoL are fully voiced and while they don’t say much what they do have to say matters. Like how each character has a taunt and joke that can be performed on the battlefield. Some of these are pretty funny and add an extra bit of spice to the characters.

So overall we have a great game here, in fact not just great, I’d go as far as to say that LoL is one if not the best MMOs out there. Everyone else can keep their WoW and Rift because I’ll take LoL any day! Also if you want to join me in a match feel free to send me an invite. My username is billum256 and I’ll be more than happy to hang out!

League of Legends shines brightly with a perfect 5 out of 5 GiN Gems!