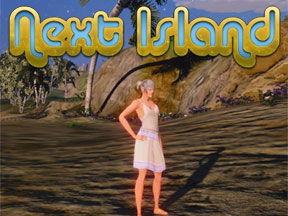 Massively multiplayer online games are a lot of fun, but only if there are lots of adventures for players to find and do. Meg Stivision makes sure that happens. Her latest project is designing quests for Next Island, a science fiction time-traveling MMO set in the Entropia Universe.

We talked with Meg about what she most likes about Next Island, the industry in general, and what’s the deal with Sebastian, the game’s genetically modified monkey.

Stivison: Next Island is a science-fiction MMO, within a network of games in the Entropia Universe. Players in Next Island join a community of scientists in a parallel universe, and they must work with others to discover the island’s secrets, develop essential technologies and unlock time-travel to distant places.

I was intrigued by the project when I first heard about the time-travel aspect of the game. This mechanic allows the gameworld to just keep growing, and allows for so many varied story options. My work is on designing quests for this world, which is an interesting challenge because my goal is to bring characters, adventures and stories to life within an existing game structure and existing interface.

GiN: What is it about Next Island that you think players will especially get a kick out of experiencing?

Stivison: Our next content release, in the end of November, brings back a character called Sebastian. The players really loved him, and I’m sure they’ll enjoy seeing him back again. Sebastian is a genetically modified monkey, and he’ll be explaining why he hates the jungle boar so much, and providing a story teaser for content we’ll be releasing in January.

I think our players will really enjoy the additions to ancient Greece. Once a player discovers time-travel, they can visit our second environment, ancient Athens. This is just gorgeous, with a historically accurate Parthenon, and dangerous cyclops and minotaurs outside the city. I wish I could say I contributed to the design, but really I’m just helping to populate the ancient Greek time-travel destination.

November’s release introduces two new storylines set in Greece, one of which is based on the myth of Arachne, and one of which takes advantage of the time-travel mechanic. There are also new Greek clothes and items, since players can’t bring items back from the present day without causing a time paradox.

Stivison: My dad introduced me to text-based adventure games when I was a little girl. I really loved exploring and solving puzzles, and just interacting with an unfolding story. Those hours playing Zork and Adventure have really influenced the games I enjoy playing and making.

My current project is a multiplayer, persistent gameworld, so the parameters are quite a bit different from a linear, single-player game, but I think a good narrative is pretty universal.

Stivison: With so many games coming out on so many platforms, it can be very hard for a new game to get noticed. There are lots of great games, especially indie titles or releases from smaller studios, that just get lost in the noise.

I think the stereotype of a gamer as a male in his late teens or early twenties, playing marathon game sessions from his mom’s basement, is becoming a smaller and smaller percentage of people who enjoy games.

I do worry that immersive games may be ending, in favor of fifteen-minute Facebook games, but overall, I’m glad that there are more people playing.