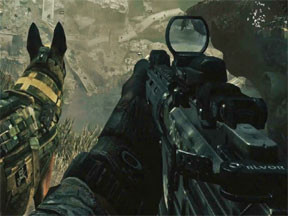 Call of Duty, the PS4 version, looks great, sounds great, but plays okay. Todd Hargosh already gave an in-depth Xbox 360 review of the game. Mine concerns itself with the PS4 version and the differences between the game on the last generation hardware versus the latest gear.

The game starts off when a highjacked space weapon causes the devastation of the southwestern United States. The player then must wage a guerilla war against these highjackers, a ‘Federation’ of South American nations. This war between a devastated United States and an ascendant Federation extends to multiple environments with some changes in points of view. There are numerous weapon choices and even some limited hand-to-hand options.

The main protagonist and point of view shooter is a young man named Logan who finds out his father is a member of the legendary Ghosts, a Special Forces group that carries out the asymmetric warfare strategy of a crippled nation. The antagonist is not a South American Federation soldier or despot but a captured Ghost who has turned traitor through a sophisticated torture technique.

The cut scenes use a building block, muted color pallet that combines stylized maps with a quietly resolute narrator. All excellently done. It is the combat scenarios that are uneven. Often the player feels they are being funneled into one path, with little or no ability to flank your opponent. The space and underwater environments don’t have this problem.

The PS4 made the space and underwater scenarios pop onto the screen. I replayed those because of the sheer fun and beauty of the graphics.

To say the graphics are ‘good’ is an understatement. They are sharp and well constructed. The shadows are more stark and the colors more vibrant. It makes targeting long rang easier because you can see the opponents better. The explosions rock the screen and make for a movie level experience.

The controls worked well and the system itself never disappointed me. I expect good things from the PS4 and can’t wait to try other games on it.

If you are a fan of the franchise this installment is worth a look. It is like a franchise movie that delivers in looks and action but doesn’t have a gripping plot. What makes this game different from the others in its franchise is that it is a bridge between the probable present and the undetermined future. The future is where it is the most fun.