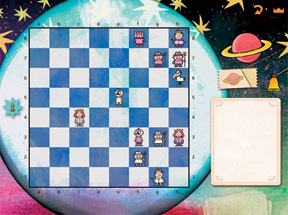 Chess programs have been around since the early days of computing and in fact, are quite prolific today. A little while ago GiN even did a round-up review of several that were out there on the market. And recently a PSP chess game was released that is generating a lot of buzz among those that play this noble game.

But where chess is popular with gamers, there is also an underserved market. Children are often left out of the loop, which is unfortunate given that chess teaches critical thinking, planning ahead skills and strategy. Plus it’s fun and really exercises your brain. The Fritz and Chesster series has filled this gap with entertaining chess teaching tools over the years. And now Fritz & Chesster’s Chess For Winners is ready to teach kids advanced concepts about the game.

For a kid starting out with no knowledge of chess, I would recommend one of the prequel titles to get started. Although Fritz & Chesster’s Chess For Winners can teach you basic moves, these are covered more in previous titles. This game seems more aimed at teaching kids advanced concepts that will take them from mere players to regular winners.

Each game in the Fritz series takes place in a unique location from the throne room of a kingdom to a dark dungeon. This time the game is set at a Chesstival, which seems to be a combination of a carnival and amusement park that revolves around playing chess. The old and lovable characters like Fritz and Chesster and Bianca are all present as well as the villain of each game, King Black.

The way the game basically works is that there are a series of rides like the Ferris wheel or bumper cars and also carnival-like games like throwing baseballs at targets where you can win stuffed animals if you are good.

In fact, each activity or ride is actually a mini-game, which is a good way to setup a kids title because they can learn in short steps and not get frustrated or bored. Basically they can play as many mini-games as they want, learn chess concepts and then stop whenever they choose. The other games will be waiting for them at a later time. Chess is a lot of fun but it can also be boring and dull to kids expecting the action of most computer games, so it’s nice to see that this version of the series keeps things interesting.

Some of the new chess concepts that are introduced are the time clock and also tactics like diversion and interruption. The time clock is a staple of any professional chess tournament. You only have so long to make your moves and if you take too long then the game is over. But unless a kid is taught how this works, they are gong to be pretty perplexed the first time they confront one.

Diversion is fairly self explanatory. You simply goad your opponent into capturing some low value piece which sets them up to lose something bigger, or simply keeps their eyes away from a mate you are planning. And interruption is a way to recognize traps and avoid them, or turn them around on your opponent. Again, these are all advanced concepts but not normally covered in most educational chess tools.

Other concepts included recognizing key squares on the board, like the four in the middle of the field, and what pieces can best defend them. And the concept of recognizing mates is also shown. This one sounds simple but can be a little complex given all the ways pieces can move. And if you can’t recognize a mate, you are likely to walk right into one if you are not careful.

The game also looks at how to make a successful opening move, which can be a huge question that may or may not decide the fate of the entire game, and also some strategies to use as the game is winding down and there are a lot fewer pieces available. This way you have your beginning and endings covered.

This game even goes so far as to teach different types of chess like blitz chess and capture chess, just in case you want to spice up your gameplay a bit with different variants.

As with most chess games published by Viva Media, you get one free year’s membership to Playchess.com as part of the package. So once you have figured out all the right moves, you can challenge others online to see how good you really are.

Children who have a basic understanding of chess will get a lot out of Fritz & Chesster’s Chess For Winners. Adults looking to have a little fun with chess might enjoy it too, as the mini-games are very interesting. And of course, this is a perfect title for children and parents to play together, which are exceedingly rare these days. This new Fritz & Chesster wins 4 1/2 GiN Gems for teaching children how to play good chess in a fun way, but without treating them like children.