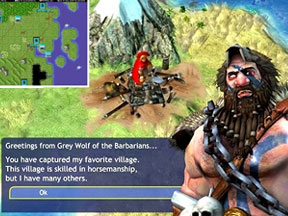 When I first played Sid Meier’s Civilization back in 1991, I had no idea that it would be a huge part of my life. Not only was it the first PC title I played, it was also a game that was so addictive, so enjoyable, that it was able to keep me playing until four in the morning, and even then I still had that feeling of "just one more turn."

Since then I have played all four PC versions, as well as its sci-fi sequel Alpha Centauri (another series that desperately needs a remake) but since leaving the PC gaming scene due to the insane price of upgrading ($500 for a graphics card to play Crysis) I wondered if Civ would ever make an impressive console title (and no the Super NES version didn’t count.) But on the other hand, my concern that a console version of Civ would end up being dumbed down in order to satisfy the short attention span console gamer was a constant worry. Thankfully with Civ Revolution that is not the case, as even though games are much shorter than its PC brethren, they still play great and are just as addictive.

Civ Rev’s concept is pretty simple. Select one of sixteen different civilizations and build it from the start of history (4000 BC) all the way to the Space Age. Build other cities (or even conquer rival cities,) increase technology and production, and even use cultural influence to win over other cities. Along the way, specialized buildings are built to increase production and technology, as well as special Wonders that provide a significant boost to the city, or even civilization, who possesses it (provided that it is not made obsolete by a future technology.)

In addition, there are several hidden artifacts in the world that provide larger boosts than even Wonders can’t provide. For instance, the lost city of Atlantis provides a major scientific boost as it allows instant discovery of any three scientific advances.

Gameplay is slightly simplified to fit into the console market, as well as to keep games short. A typical Civ game on a PC can last upwards of ten hours, but on consoles getting to the Space Age usually takes about three hours. As a result, the technology tree, as well as the number of military units and Wonders have been decreased.

The one advantage to the smaller number of units is that now three similar units can be combined to form an army. In addition, when these units win successive battles and are upgraded to Veteran or Elite status, they obtain special abilities, such as Blitz (an additional move after combat) or Infiltration (stronger against city defenses.)

While combat is much easier to get into compared to past Civs (and even gives you an easy to understand summary of units,) there are some times when combat had me scratching my head. For instance, I have a platoon of 15 tank armies about to attack a city which his being defended by a group of Riflemen (who would be made obsolete by Modern Infantry.) However, they are able to defend the city over and over again. On a realistic sense, this is downright impossible, but it happens in Civ. It seems that due to various modifiers in the game (city defense, walls, veteran status, etc.) that it makes these victories mathematically possible. Apparently this has been around since the first Civ, with the "phalanx defeats tank" incident, and it still happens to this day. I really hope that a patch comes out to fix this issue because it can get downright frustrating.

Another criticism I have with the combat engine pertains with one particular unit, the ICBM. Whereas in past games any units can create nuclear weapons (after one civilization develops the Manhattan Project wonder,) this time the same wonder allows its holder to possess the ONLY ICBM in the game. This makes no sense at all. Why only have one ICBM in the entire game. Not only does it limit the effectiveness of the weapon, it also makes the SDI Defense city advancement useless. Why would I want to build it if I have the Manhattan Project wonder? It’s a waste of resources.

Games are won in one of four ways: Domination (capturing all rival civilization capitals and holding them for one turn,) Economic (bank over 20,000 gold and building the World Bank,) Technology (build a spaceship and successfully arrive at Alpha Centauri,) or Cultural (obtain a combination of 20 Great People or converted cities and build the United Nations.)

However, as levels get higher, particularly starting at King difficulty, other civilizations show no mercy with negotiations. Speaking in their unique "Firaxis-ish" with some unique dialects (Caesar adds a little Latin while Alexander has a touch of Greek with his language,) they always offer to not engage in war in exchange for almost all of your gold pieces or one of your Great People. It always ends up being a game of blackmail until you are finally able to defend yourself and bring them to their knees.

However while doing so the models are highly detailed and look as good as they did on the PC, as does the rest of the game, but only at the cost of slowdown when the world is more advanced but nowhere does it become unplayable.

In addition, aside from the pretty funny Firaxis-ish, there is not much in terms of sound or music, just a couple fanfares when meeting a rival leader (or barbarian) or when acquiring a new Wonder or artifact. A nice touch though comes when arriving at a friendly village, where you can actually hear the theme from Civ IV playing in the background. If only it was played more often.

Online gameplay is also available as head to head with one AI, two teams of two civs each plus another AI or a Free for All of four players and one AI. In addition, there is also a "Game of the Week" option which is a race to see who can beat the game the fastest. In addition, new Wonder and Artifact packs will be available as future downloads. It will be interesting to see what will be released in the future.

But did Firaxis succeed in making a very playable Civilization for the console market. In a word, yes.

While the game was made simpler than on the PC, it is also much easier and faster to play, and the replay value cannot be disputed. Hopefully the game will be expanded more via the PlayStation Network and Xbox Live to create a deeper experience, but for those new to the Civ franchise, this is a great start.

Still I have to wonder. If Alexander does get a domination victory, does he still weep for there are no more worlds left to conquer? Let’s hope that an Alpha Centauri remake comes out then for him"

Pros: Excellent conversion of the PC classic to consoles. Controls are simple and spot on. Simplified but not dumbed down gameplay resulting in games that are significantly shorter (average about 3 hours.) Combining three military units into an army really helps to build up a quick fighting force. Gorgeous environments"

Cons: "that tend to slow down the game when the world gets densely populated. Limited music and sound effects (though the fictional language is pretty funny.) Limited tech tree and wonders might turn away hardened PC players. (Downloadable Wonder/Artifact Packs will hopefully fix this situation.) ONLY 1 ICBM PER GAME????? (Which also makes SDI Defense useless.) Please explain to me how individual soldier units are able to successfully defend a city against an elite tank army!