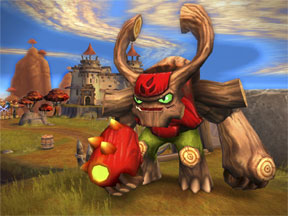 Skylanders: Giants is the second in the Skylanders series, and it’s bigger and better than ever. Everything you loved about the first Skylanders game is here: the fun graphics, the engaging storyline, the cool figures that can transfer between platforms, the great voice actors and the amazing music by Hans Zimmerman.

The story opens with Kaos up to his old tricks. This time he’s seeking to awaken an ancient race of robots with eyes on taking over Skyland. So you as a portal master will have to stop him with your Skylander heroes, but this time you have access to many more heroes. Sixteen more, to be exact, and some of them are giants. The Giants bring a whole new level of play to the game. They can open access to areas that other players can’t access as easily or at all. They can throw boulders, which is awesome. They can smash holes in the ground to access caverns. They can even pull chains and move small Skyland islands. Each giant has its own unique powers, just like the other Skylander heroes.

In terms of the figures themselves, the Skylander giants are twice the size of the normal figures. They access the portal the same way and are basically just bigger, better heroes. This is all good unless you’re a collector, because these figures add up. The giants are more expensive than the regular heroes. Luckily, you only need eight figures, one for each type of region. If you already have a figure for each region, then the addition of one Giant would get you access to all the areas of the game. Naturally, there are goodies and add-ons you can’t access with just eight figures, but if you’re trying to keep costs down, you only need eight as long as one of them is a giant.

Like before, the figures are sturdy and well made, which is good news for parents of children who have a tendency to break things. In addition to the giants, light core characters have also been introduced. They light up in interesting ways when you place them on the portal. All characters are transferable to other portals, but not all characters will go backwards into Skylanders: Spyro’s Adventure, so read carefully when you’re choosing figures if you want to use them in both games.

If you’ve never played the first Skylanders game, it doesn’t matter. Skylanders: Giants does a good job of introducing the story as a stand-alone game for new players while not giving too much detail up front and boring players who are already familiar with all the characters.

Just like the previous game, Skylanders: Giants is a wonderful introductory third person RPG. It’s a great way to introduce character stats and levels to kids just beginning to play games on their own. For the young at heart, who play Skylanders games whether they have children or not, there is a hard setting that makes the game more challenging for older kids or adults.

The best thing about Skylanders: Giants though is its fine storytelling. If you’ve played the first game, you’re happy to see these characters again and you’re curious to go on adventures with them and see how the story unfolds. Toys for Bob has done a terrific job in developing this game. Not only is it marketing genius, with its collectible figures, but it’s marketing genius done well.

Skylanders: Giants has new features, which include new arenas and different gameplay options in battle mode. There are now three difficulty levels and characters from the previous game can be leveled up to level 15 now, and the elemental zones have been enhanced with subterranean caverns and all manner of goodness. This is an improved expansion of the world not just the first game repackaged, which is so refreshing in the world of children’s gaming.

If your child loves fantasy adventure, then this is his or her must-have game of the year. I know the characters get expensive, but look at it this way: it provides perfect instant gifts for aunts and uncles who never know what to buy. There are also starter sets with and without portals, so if you bought the first game you don’t need a new portal. I appreciate that kind of savings in gaming. I wish more games let you move characters from one game to another or from one platform to another. I would love to pit my level 50 something Nord against John’s level whatever Argonian, but Skyrim doesn’t let you do that. Skylanders does. This is another winner for Activision.

Skylanders: Spyro’s Adventure earns 4 and 1/2 GiN Gems, making it a near perfect treat for the whole family.