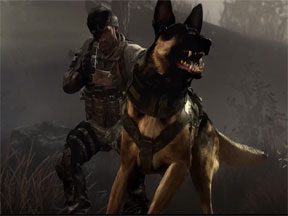 Editor’s Note: Be sure to check out our full video review of Call of Duty Ghosts a bit farther down the page.

I’ve been playing the Call of Duty series since the first PC game, and for the longest time I have defended the series, especially from those who favored Battlefield. But over the years it has become harder for me to defend it. When key members Jason West and Vince Zampella of Infinity Ward were let go by Activision and eventually founded Respawn Entertainment prior to Modern Warfare 3, I thought it was the end of the once great developer. Although Modern Warfare 3 was released with the help of Sledgehammer Games, it did end up being a good game, if not as good as previous Modern Warfare titles. Not to mention that the alternate Call of Duty developer, Treyarch, was starting to provide the better games of the franchise.

With the Modern Warfare franchise at an end, the latest release by Infinity Ward, Ghosts, recruits the help of developers Raven Software and Neversoft and continues the trend that Black Ops II started: future based combat.

Call of Duty Ghosts still follows in the Modern Warfare universe, as it follows the nuclear destruction of the Middle East in CoD 4, but the main enemy is based in South America. Known simply as "the Federation," they become a global superpower and plot to take over North America. Before the game begins, we are told about the Ghosts story by retired US Army Captain Elias Walker. He explains to his sons Logan (the main character,) and "Hesh" (played by Brandon Routh of Superman Returns) about how the Ghosts first appeared. However in space, a station that ruins the Orbital Defense Initiative (aka ODIN) is attacked by the Federation. Despite attempts by the station astronauts to stop the assault, the Federation launches a kinetic strike on the Southwestern United States. The Walkers home town on San Diego is destroyed and becomes a "no man’s land."

Eventually Logan and Hesh, as well as their trained German Shepherd named "Riley," are found by the Ghosts and saved from an ambush. However, they also find a Federation-supporting American known simply as "Rorke." It tuns out that Rorke himself was a Ghost as well, but during a mission to assassinate a Federation President in Caracas, Rorke is abandoned by the Ghosts, but was captured, brainwashed, and turned traitor.

The heart of the campaign comprises of hunting down Rorke and stopping the Federations plans for future attacks on the United States. Most of the campaigns are the standard CoD run and gun fare that we have seen every year. But some missions do help to provide a change from the monotony. For instance, adding Riley as a partner allows you to use him to search areas and attack enemies on command. The attack feature reminded me a lot of Shinobi: Shadow Dancer on the Genesis and is just as effective as it was there.

In addition there are missions that feature underwater combat, and one I never expected, space combat. Yes Call of Duty is now going to the final frontier of combat, and while trying to get behind cover in space is challenging due to adding another axis to manage, it ended up being a lot of fun.

And speaking of fun, I have to admit the final few missions of the game were exhilarating to take part in. But sadly, it all ends up being for naught as the game results in the worst crime of sequel bait since Halo 2’s "Finishing this fight" cliffhanger. The end just infuriated me and I want it resolved now. But we know with Call of Duty’s cycle, it won’t be until 2015 until we see what happens.

Admittedly this is the first Call of Duty game I spent a lot more time doing multiplayer as well. The reason I don’t do multiplayer is because it is near impossible to really get into a good matchup without higher level players taking advantage of you, sniping you the moment you get respawned, and dealing with campers who stay hidden in one space and are impossible to hit.

Fortunately the camping part is somewhat alleviated with the new gameplay modes that are added in multiplayer. One that I played a lot is called Cranked, which plays similar to team deathmatch except that scoring a kill allows you to become "cranked," where you move faster, aim faster, and toss grenades faster. There is a catch though, as you need to perform another kill within 30 seconds or you die yourself. I can see how needing to run around a lot will kill off campers.

Another game mode I played more often is Hunter, another deathmatch mode that starts you off with just a pistol, and you must acquire care packages to get better weapons. While it seems to be more based on classic deathmatches such as in Quake, it reminded me a bit more of the Hunger Games, namely the Cornucopia bloodbaths. But still, I am suffering from problems from cheap opponents who are way too high up level wise, and I really wish that Call of Duty would allow a better skill matching system. I hate being the only Level 5 player in a mass of Level 60s.

Infinity Ward appears to be following up on Treyarch’s popular Zombie modes with Extinction, a 4-player co-op mode defend an area from waves of aliens, destroying their lairs with a carried drill device. It does remind me a bit of Left 4 Dead at times.

As always the production quality of Ghosts is top notch, especially on my Xbox 360 review copy. The game is a near constant 60 frames per second and looks very impressive on the aging hardware. While I have not seen the PlayStation 4 nor the Xbox One version, I have heard reports of the PS4 version suffering frame rate drops during multiplayer. But on the other end of the spectrum, the PS4 version runs at native 1080p (after a patch) while the Xbox One is at 720p. So in the end it may be a choice between resolution or frame rate. Personally, I’d favor the latter.

In the end though, Call of Duty Ghosts is feeling more familiar than ever before, and it really is time for Activision to spice things up. While the addition of space combat is a nice plus, it still isn’t enough, and the sequel bait ending will leave fans of the series yelling in frustration., but still the game isn’t bad, and a fun shooter while it lasts. Hopefully Treyarch will wow us over next year. I guess we’ll have to wait and see…

Check out our video review to see some of the levels from the Xbox 360 version of the game, and a few of the multiplayer modes available.

Pros: Typical top notch Call of Duty presentation, even on the aging Xbox 360. Using Riley as a comrade is a nice change in pace, as is the underwater and space based missions. New multiplayer modes such as Cranked help somewhat alleviate camping tendencies. Extinction is a fun Left 4 Dead style follow up to Zombies, but with aliens.

Cons: The rest of the story is cookie cutter CoD material. Riley the dog is a great concept that is sadly underused. Ending twist is very disappointing. Multiplayer needs more skill level balance.