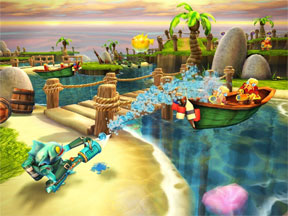 Skylanders: Spyro’s Adventure might at first seem like another toy-driven game designed to capture kids’ attention, but too poorly designed to maintain it. I was, however, stunned at how engaging this game is and how integral the figures are, and how expansive the experience can be.

The first thing about the game is that the starter kit comes with a portal, yes I know another peripheral device on the coffee table or in the living room floor, but this is a good one. It’s not too big either. Imagine a tall coaster. The starter set comes with three figures, all of which have collector’s cards, and then, of course, the game itself which is available for all current platforms.

As the story opens, players are introduced to Skyland, which is suffering under an expanding darkness. An aging portal master is trying to stop the encroaching darkness and the player is just the other portal master he needs to help him.

As it turns out, all the Skylanders have been flung out of the world leaving only ordinary denizens behind. Those Skylanders have ended up in our world. The long journey turned them into small figures, but when a portal master puts a figure on the portal it gets sent into the Skyland as its heroic self.

The figures are critical for game play. You can complete the single player storyline with the figures that come in the starter kit, but in order to access all the areas of the game you’ll need to purchase extra figures, one for each of eight types: magic, water, technology, earth, air, fire, undead and life. The starter kit comes with Spyro, a magic user, Gill Grunt, a water user and Trigger Happy, a technology user.

Obviously, this is a piece of marketing genius. Kids who are prone to collecting are going to want to collect them all. And since the figures themselves remember their own stats, losing one might lead to tears. The amazing thing about this game is that it isn’t just a brilliant piece of marketing. It’s actually a really good game and the figures are both integral to the game and adorable toys on their own. They’re also well constructed and don’t seem fragile or cheap. I’m not saying they can’t be broken, only that they don’t seem delicate.

The game is really an adventure RPG primer. It’s an introduction to changing out players for strategic advantage. It’s an introduction to character statistics. The fact that characters can be taken from portal to portal regardless of the platform is seriously cool, so Wii, PS3 and Xbox gamers can all play together with the same figures if you bring them over to your friend’s house.

We play tested this with a 5-year-old, a 7-year-old, and an 11-year-old. They all thought it was awesome. Even a jaded 13-year-old I told about it thought it sounded amazing. He loved the idea of taking a character that he built up on his Xbox 360 to his friend’s house to play on a PS3. To be honest, there are some characters from games I’ve played that I wish I could do the same thing with.

And then there is battle mode. That’s right. Think your Spyro can kick my Gill Grunt’s butt? Bring it. Enter battle mode from the main screen, put two figures on the portal and you’ve got a really fun fighting game.

There is also a child friendly website with online mini games and a soon-to-open community section. It also has a section just for parents as well as lots of information about the game and characters.

So I know dealing with another peripheral device seems like a hassle. And I know you don’t want to keep track of all those figures. But this is one of the best kids’ games I’ve ever played. It’s an action/RPG and a two-person fighter and the characters are useable across all the platforms. It’s got a sound and engaging storyline and it’s a well-constructed, expansive world. It’s not full of glitches like a lot of children’s games.

The developers really took their time with it and it’s easy to imagine it will expand to other games for the same characters in the future. Best yet, with voice actors like Patrick Warburton and a Hans Zimmer soundtrack, you’re not going to mind playing the game with the kids. In fact, you’re going to enjoy it. Put this one on your holiday gift list. Any kid would be thrilled to get Skylanders: Spyro’s Adventure, and it’s truly fun for the whole family.