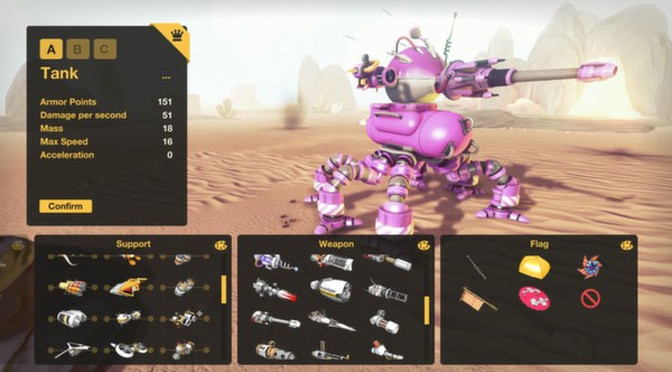 Ever heard of Gear Up? I’m disappointed if you haven’t. It’s a game I checked out as a Time Waster way back in September. At the time, the game was still in it’s Early Access stage, but now it’s been given an official release. To make things easier, you should check out my previous article about the game to better understand this one.

Honestly, Gear Up hasn’t changed a whole lot from when I first checked it out. The game is all about building tanks and fighting each other in online death matches. It’s free to play, but can be somewhat limited without using real money. Players can unlock parts for their tanks as they play, but the option to buy all the parts available and can be a temptation.

I say buying parts is a temptation because I find that my main enjoyment in the game comes from building tanks and trying out different setups. There are 116 parts in total, giving players a lot to work with.

One of my main complaints for the Early Access version of Gear Up was that there was no one to play with. Luckily, this has changed with the official release. I’m not really surprised by this, but it does make it more worthwhile to jump on for a quick match.

One part of Gear Up that hasn’t improved at all are the bot matches. Bots are still morons in the final version and there’s very little players can do to change around matches with them. it kind of just makes them cannon fodder for testing out new tanks, but even then, that doesn’t give a very good look at how that tank will handle against other players.

The graphics in Gear Up are still great, which was one of the surprising elements of the Early Access version. There’s a lot of detail in the game for what it is and it’s a nice change from the typical free-to-play game.

The audio in Gear Up has gone through some minor changes. These changes mostly come in the form of the sounds being equalized. This solves one of my complaints from the Early Access version and definitely saved my ears from out of nowhere loud sound effects.

Overall, Gear Up is a great free-to-play game. Will it ever take the place of Call of Duty, Halo or Team Fortress 2? No. But it will give players a nice break from these games and is still very enjoyable. The game isn’t perfect even out of Early Access and there are a few tweaks that I wouldn’t mind seeing, but it’s still worth checking out.