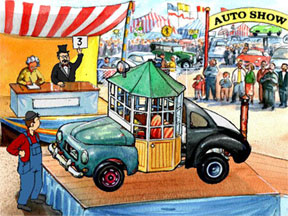 There is something about taking nothing and turning it into something. That is the concept behind Gary Gadget: Building Cars. You help Gary take junk found in his yard or donated by friends and turn it into, of all things, automobiles.

The game is perfect for children who like to build things and the interface is simple and easy to use. If there was some type of tutorial it would be even better, but even without this, it’s still quite easy to get started. You basically just pick up junk like old car hoods and lift them out of the junk pile with your mouse. Then you click on your garage door to move stuff in there. There are several piles of junk lying around, so you need to walk around to make sure you find everything.

Once you have the parts you need in the garage, you just head inside and can see the basic frame of your car. To make any car move you need wheels, an engine, a battery, a steering wheel and something to carry gas. By picking up items and placing them onto a car you can install new parts. And by grabbing them and pulling them off, you can return them to your junk pile.

As you play, you will get phone calls and letters from friends of Gary who would like him to come and visit. This leads to tasks within the game that require special cars to be built. For example, one of Gary’s friends is having a party and is out of fruit juice. He asks Gary to use his vehicle to grab some more. But when Gary gets to the juice field he finds that the juice is poured through a hose, so it’s impossible to transport by normal means. However Gary can build a special vehicle that can transport the juice, but it takes both a little imagination and also the completion of another quest to get the right parts.

Once you get a vehicle built, you can go out and drive it on the roads around Gary’s little country town. Driving consists of using the arrow keys to move around. You have a speedometer and also a gas gauge to watch as you travel, but it’s really just point and move. You can also use the mouse, and your car will follow the cursor.

The graphics look to be drawn by hand, and especially the map screen where you drive your car seems to be pulled from a story book. A long time ago when I was little I had a children’s book that had all these roads on the inside cover and I used to imagine driving around them. This is kind of like that, although with a real car.

The audio is a mixed bag. The coolest part is that each car you build actually sounds different whether you are using a motorcycle engine or a truck motor or even a jet engine that makes you sound like a rocket. On the bad side, Gary gives these little tidbits of folksy wisdom and tends to say the same things over and over again. If I had to hear him talk about "gadgets and gizmos" one more time to describe his car parts, I think I might have run off the road. Still, Gary is charming in his own way, and his simple attitude should appeal to children.

Which brings us to our kid tester, in this case my six year old nephew, Sam. Sam is always building things with Legos and took to this game right away. There were times when he was frustrated, like when he knew he needed a horn to scare the cows off the road, and actually had one, but could not attach it to the car. After reading the manual I learned that horns are mounted to the tops of cars, which we could not do because we had a convertible-like cover. Switching to a vehicle with a nice flat roof, the horn was easily mounted.

Sam was also a little frustrated trying to get a light enough car so that Gary could visit his friend who lived over the rickety bridge. When a pair of roller skates was delivered to the junkyard however, he immediately changed out the heavy tires for those wheels instead, and replaced the old sofa he was sitting on with a small wooden stool. This made the car light enough to drive over the bridge, and Sam let out quite a happy cry when it finally worked for him.

Gary Gadget: Building Cars may be a little difficult for six year olds playing by themselves, but this gives a perfect excuse for parent and child interaction. There is the eternal image of a father and son bonding while working together in the garage building a hot rod or soap box derby, and Gary Gadget recreates this experience perfectly, only without all the oil stains. Expect hours of interaction as children experiment to see what happens when they try to add the balloon gondola or other odd object into the passenger area of their newest creation.

Gary Gadget: Building Cars is a fun and funny family experience being offered for a great price online. The game comes on a hybrid CD that works with PCs running Windows XP and any Mac running System X. It earns 4 GiN Gems that Gary will probably just toss into his garage, at least until he can incorporate them into a new vehicle.