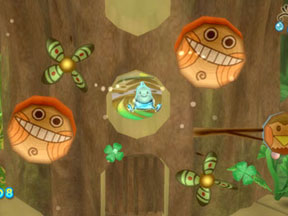 In Konami’s latest Wii game, Dewy’s Adventure, the creators vastly overestimated their target audience’s gaming ability. The point of Dewy’s Adventure is to get Dewy, a lovable little water droplet, across various levels, and at the end he’ll face off with one of the six world bosses.

The controls that accomplish this task vary, as Dewy can change his form from gas to liquid to ice, just like any respectable water droplet should.

When in gas form, Dewy’s main method of attack is a lightening strike; as liquid, he’s able to do a slam attack; and as ice, he uses spin attacks. Changing your state of composition also affects the environment’s temperature, which helps you progress through the game. Dewy also has the ability to create earthquakes and wind gusts.

As far as moving around goes, Dewy basically slides through a series of themed worlds that are all connected to the Wii remote. Tilt the Wii remote to the left and the entire world tilts left, tilt right and the world tilts right, etc. The droplet’s rate of movement changes as he switches through his different states.

There are a number of interesting puzzle situations to master in every level, but one must question why the creators put so much effort into this kind of game. When seeing Dewy’s Adventure on a store shelf, your average gamer isn’t going to think twice about picking up this title, and the ones that will won’t have the vast amount of patience and skill that this game requires. Basically the marketing seems to be geared towards kids, yet the game is a little too complex for that, which is a shame because kids will be frustrated by it and adults won’t know to pick it up for themselves.

The story in Dewy’s Adventure is another issue that appears childlike until you begin to examine it.

All throughout the levels, Dewy is releasing his watery brethren from grips of the evil Don Hedron. Excluding the bosses, every enemy you take down ends up having one of the happy creatures you’re trying to rescue inside it, meaning every enemy has a subjugated revolutionary trapped inside them, just waiting to join the resistance and take down Hedron’s corrupt system. I half expected access to an underground movement after the closing credits.

Unfortunately, when I beat Dewy’s Adventure, no manifesto presented itself.

I was truly disappointed.

If, in fact, Dewy’s Adventure is a harmless kid’s title, then what testers are to blame for this game’s level of difficulty. Even from an experienced gamer’s point of view, it’s almost absurd how hard this game is.

Here I am, guiding an infinitely cheery droplet of water through strenuous obstacles, controls, and bosses. I’m completely immersed in the challenges, all while my girlfriend’s little sister (9 years old) sits in a corner asking if we can play something else.

"This game is too hard," she says.

"No, it’s not," I insist, though it’s taken me more than five retries to complete The Ruins level.

Honestly, I would feel a lot better about loving this game if it wasn’t so cheery.

The style of the characters in this game is very reminiscent of Konami’s launch for the Wii, Elebits (which was an equally fantastic game). There are lots of colors and cute little mewling creatures at every turn. The music is upbeat and the overall story is told through voiceover and a number of beautiful still frames.

Everything about this game suggests that its difficulty be toned down for a younger audience, however the fact remains that Dewy’s Adventure is very engaging for a more experienced crowd, and will most likely fail to reach those who would appreciate it.

Still, if you can get over the abundance of bubbly happiness, a lot can be taken from this Konami release.