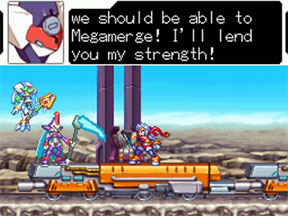 Capcom celebrates the 20th Anniversary of the popular megaman series with its latest sequel, "Megaman ZX Advent." Following up a fairly solid predecessor ZX Advent keeps a lot of the same former elements in tact and manages to build on them ever so slightly. Once again the fate of the world dangles in the hand of a madman and it’s only hope lies with two heroes chosen be it by fate or by destiny to stand between this new menace and world domination.

The story picks up several centuries later following the war between reploids and humans. Since then, the two sides have managed to peacefully co-exist in this high-tech world. Nation-states of reploids and humans are flourishing and the future seems to show promise.

There are still distant old ruins scattered throughout the land, remnants from the war, and these ruins have become home to a group of feral machines called "Mavericks" These danger zones are the final resting places of lost powerful technologies from long ago. One bold entrepreneur took advantage of this buried treasure of cutting edge technology and used it as a base to form one of the worlds leading corporations. Soon after, people dreaming of getting rich quick, known as "Hunters," formed Hunter Guilds to seek out the wealth lying within the ruins.

However, the temptation of the technological windfall was too much for some and so rather than joining up with the hunter’s guilds they remained independent. Commonly known amongst society as "Raiders" these people choose to seek out the treasure of the ruins for themselves. Ironically, in the midst of this great "tech-rush" people seemed to have forgotten that the technology they’ve all gone through such great lengths to seek out was designed for only one purpose: War.

Not a lot has changed since last year’s version so if you’re an avid fan of the series, expect to see much of what you saw in the previous advent title with a few new twists. The series continues its strong visual presentation featuring large and vividly colorful backdrops that seem as if they go on forever.

Character models seem a bit more polished and detailed than before looking good in their new outfits and various armors and you can definitely expect to see a display of cool weapon and environmental special effects during those boss battles.

The game has surprisingly received new "English" voice-overs as opposed to the former Japanese ones. Though the voice acting tends to leave a little something for the wanting the change over is somewhat pleasant and dually noted. Not all is lost in the sound department however as the dynamic musical theme of the game remains very solid and well in-tact.

This year’s installment follows the parallel paths of Grey and Ashe, two new mega metal heroes. Though they will inevitably follow the same storyline their backgrounds are slightly different. Grey is a young boy discovered in cybernetic hibernation in a lab rescued by a group of hunters who later goes on to join the cause. Ashe is a gutsy member of the Hunters Guild always looking to score her next bounty. She has received orders from the higher ups to secure a rare biometal from a group of Raiders.

The game allows you to choose one or the other at the start and depending on which one you choose you’re natural abilities and situations will vary throughout the adventure.

A special kind of metal with its own consciousness, "Biometal" is one the most precious commodities of the future. When it finds a suitable host or "Biomatch" to bond with it megamerges with it and the two become one. Earlier on in the game, both Grey and Ashe are exposed to a Biometal A and merge with it to gain a host of new mega powers. Players will have to utilize every bit of Ashe and Greys’ new found powers along with some considerable time and practice if they’re going to overcome the tough task that lies ahead of them.

Arguably, one of the most challenging side-scrolling series to ever hit the market, Megaman ZX Advent continues the trend with much of the same fist clinching, teeth grinding levels and brutal boss battles followers have come to know over the years.

Expect all kinds of heavy resistance from a sizable show of formidable machines and bad guys as well as several risky jumps over spike-filled pits and a lot of high ground that won’t be so easily accessed without some tricky acrobatics.

If you manage to overcome all of those trials you’ll most likely have your hopes quickly dashed a time or two or three even before you get a number of boss battle victories underneath your belt.

To make matters worse, dieing usually means a fairly long return trip from a pretty distant save point before you get back to where you were previously. Reluctantly, there are actually a few random warp points which you can access along the way to help speed up your travels but, if you don’t have the right amount of "e-crystals" to power them up then your mega shoes are going to get a lot of time in.

When you’ve finally become so mentally frustrated with the game that you’re about ready to bring a whole new meaning to the "touch screen" feature of your DS, you can join the vast lower percentile of gamers out there who’ve had to humiliate themselves by resetting the games difficulty levels back to beginner.

For the iron-willed gamer success will eventually come with consistent repetition. Much of the game, as well as other past titles in the series, is based on timing and mastering the attack patterns of the enemy. The rest is pure luck. As you begin to progress through levels will you gain access to several power-ups such as secret disks, key items, sub tanks for reserve energy, and even upgrades for your Biometal. After defeating a boss you can copy its appearance as well as it’s abilities from head to toe using the "A-trans" ability of the armor.

Besides the comfort of harnessing new abilities for future combat situations the game will more than oft present players with situations that require the specific abilities of certain biometals that have previously been acquired. Outside of obtaining new biometals, enough extensive exploration will earn you other helpful plusses during your adventure such as secret disks, sub-tanks for reserve energy, the previously mentioned e-crystals which power up warp points, and a various number of other important items.

The bottom line is that Megaman ZX Advent, outside of a few new twists, continues the tradition of bringing gamers the same experience the series has provided for years featuring a solid graphics, superb audio, and the most unmercifully challenging and brutal game play that any 2D side scrolling franchise has most likely ever brought to the table. Sadly, the majority of the gaming population will love Capcom and company for this. While the game hasn’t made any significant leaps and bounds over its former predecessor it still churns out an overall solid presentation, one worthy of at least four GiN gems.