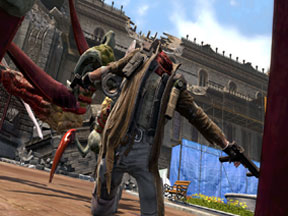 Gimmicks, specially made mechanics, hooks; they can all be a sharp double edged sword. On one hand, they can give a video game that special element it needs to push it away from the crowd.

However, if the game is not tailored around the special gimmick, made to make the game that much more enjoyable for possessing it, then the game could unintentionally commit electronic hara-kiri. NeverDead, sadly, is the epitome of the latter edge of that blade.

NeverDead’s special little gameplay mechanic is if the main character receives enough damage, instead of death, his limbs (legs, arms, head) are ripped from his body. You will need to reattach them to continue on, unless you like hopping, crawling, or being generally defenseless against swarms of enemies.

This little gimmick can be used to your advantage, such as throwing limbs at opponents and detonating them, or using your head to roll into hard to reach places, but in most cases, it’s more of an irritating obstacle than a fun solution.

The player controls the smart-mouthed demon hunter Bryce Boltzmann, who just happens to be immortal, which may have something to do with his less than sunny disposition. He was cursed by a particularly evil demon 500 years ago, and now hunts demons for money and revenge. You are accompanied by your partner, Arcadia, a cold and calculating individual who counters Bryce’s sense of humor with her icy demeanor and feigned affection.

Bryce and Arcadia share nearly constant dialogue during the player’s adventures. It starts out annoying and keeps that tone constant throughout the game.

NeverDead plays out like most typical third-person shooters. Enemies come at you, you shoot them, simple enough. However, the mechanics in NeverDead make things more difficult than they should be. The controls are stiff and pretty clumsy, making maneuvering in tough situations frustrating at best. The aiming is flimsy, unless you are constantly in the zoomed in aiming mode, and using your sword is cumbersome. The sword is swung using the right stick, making a simple exercise frustrating. Combine all of this with the constant dismemberment, and combat turns into one huge debacle.

Losing body parts is slightly annoying, but losing your head is extremely bothersome. If your limbs are lost, you merely roll over them to reattach them. This is simple until you are being slashed and clawed by several enemies at once, causing you to lose limbs faster than you can reattach them. If you lose your head, however, you take control of it and have to roll it back to your downed body and right to your neck in order to reattach. In the middle of battle, this is all quite irritating.

Aside from the third-person shooter angle, NeverDead also lets you earn experience (XP) from killing enemies. XP can be used to purchase new abilities, such as more damage with guns or blades, or special abilities like exploding limbs. Over time this allows the battle to go a bit smoother and possibly even be a bit more exciting, but the dismemberment angle is always there, pulling you back from the brink of fun every time a battle heats up so much as a few degrees.

This title is not without its high points, few as they may be. The environments look great and the detail is impressive. A good deal of the environments are destructible as well. You can shoot pillars apart and cause archways to collapse on your enemy, or shoot explosives to cause a room to go up in flames, causing a great deal of damage to opponents. These destructible environments are a nice touch and make the combat a little more diverse. Sadly, you will probably be too busy trying to hold everything, including yourself, together.

In the end, NeverDead comes up short on making its unique gameplay mechanic work for any kind of enjoyment. It’s annoying, frustrating, and never seems to add anything other than a mess during combat and a few opportunities for Bryce to make a joke about his missing limbs. The unpolished gameplay will cut your legs right out from under you, unless the enemy does it first. Either way, you’ll be left wanting a more complete gaming experience, with much more manageable gameplay.