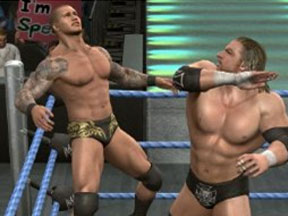 There used to be a time when I was a huge wrestling fan. During the Monday Night Wars I would look forward to watching both WWF Raw and WCW Nitro, and I would be treated to some great story lines: the nWo, D-Generation X, Austin Vs. Mr. McMahon, and The Rock spewing out his always entertaining (or electrifying as he called them) verbal tirades.

Heck, one angle I remembered real well in WCW: it was Chris Jericho, as a heel, acting like a spoiled little brat during a feud with Dean Malenko (known as the "Man of 1,000 Holds.") At first, Jericho admitted he was the Man of 1,004 holds, and even spent a lot of TV time in the ring, reading a scroll with all of the moves (despite repeating ‘armbar’ over and over again.) Stupid, yes, but oh so funny. But not as funny as when Malenko won the WCW Cruiserweight Title, and Jericho claimed that he was a "Conspiracy Victim," even going as far as going to the Library of Congress to find a loophole to get his title back.

Now those were the days. But what happened? WWF bought WCW, became WWE, and was never the same again. Shows became dull and repetitive. ECW was also bought by WWE and forever ruined. But the final straw to me was the double murder-suicide performed by Chris Benoit. After that, I never watched another WWE event ever again. I even noticed that Jericho was never as good as he was back then. I so miss the "Conspiracy Victim."

As a result, I loaded up Smackdown Vs. Raw 2010 on my 360 without any expectations. And at first it felt that way, with a majority of characters I never heard of. Sure there were those I was familiar with, such as Shawn Michaels, Triple H, John Cena, Matt and Jeff Hardy, Carlito, Undertaker, and my personal favorite, Edge, but for many of them I was asking myself "who?"

But thankfully, despite knowing only half these stars, I got into playing some of the different modes, and noticed the interface is actually improved over the last SVR title I played (which was 2008.) Rather than being filled with obstructive gauges and text, each character is represented with a simple halo which shows their super meter. When filled up either an S appears for a Special Move or F for a Finisher. It works out so well and keeps the action visible.

Some controls do feel a bit tight at times but thankfully they become quite accessible. One of the smartest things Yuke’s did was making all reversals done by one button. (It used to be one button to reverse strikes and one to reverse grapples, which became frustrating.)

Grappling transitions are also a welcome addition. In a technique inspired by UFC 2009: Undisputed, shifting the placement of your WWE Superstar allows accessibility to more moves than could be done before.

SVR has always been known for tons of modes, and this year’s release has one new mode, and a classic that has received a much needed overall. The new mode is the Championship Scramble, a timed match that starts with two Superstars and finishes with six and can result in multiple title switches, where the title holder at the end of the time limit officially wins the title. It is reminiscent of the Hardcore Battle Royal at Wrestlemania 2000 where the title changed hands 10 times before the final bell!

It’s the Royal Rumble that finally gets the much needed upgrade. By adding different button pushing minigames, every attempt to throw out a Superstar now turns into a competition, rather than being a sure thing.

Road to Wrestlemania, the game’s story mode, now features six different stories to choose from, one of which even involves created Superstars. For my review, I went through Edge’s storyline, which involved him cheating on Maria, taking advantage of all his opponents and becoming GM (maintaining his role as the Ultimate Opportunist,) getting the #30 spot in the Royal Rumble and winning the title at Wrestlemaina.

Everything is scripted like the WWE events I used to watch on USA/TNN/Spike/PPV, right down to excellent voice acting by all the Superstars and commentators.

And presentation is perhaps the biggest improvement of SVR 2010. While the game always looked amazing, it was nowhere near the level it is now. Title matches actually begin with the same Championship graphic shown in all of their broadcasts. The bottom left corner of televised events actually have the WWE Live graphic for the first few seconds, and each match even ends with the WWE Copyright notice. Sure it doesn’t sound like much, but wow, does it make the experience authentic!

Even the Superstars themselves look better than before thanks to the way damage is shown. Repeated strikes will redden their bodies at the spot they were hit, and when blood is shed, it can actually end up on the striker’s hands. Amazing.

But if there is something that needs to be improved on, it would have to be the career mode. Not that it’s terrible, but just tedious. All it consists of is selecting a title, beating other Superstars to win enough stars to become the #1 Contender for the title, and win the accompanying title match. Not really much to talk about, even if it does help to boost stats.

But thankfully the rest of the package is amazing. Is it enough to get me back to watching the WWE again? Most likely not, as I’ve moved on to MMA. Even bringing back the "Conspiracy Victim" storyline won’t do that. But still, SVR 2010 is very enjoyable and well worth the price of admission.

PROS: 67 WWE Superstars and Divas to choose from. TONS of match modes, including the new Championship Scramble. New and much improved HUD. Visuals are perhaps the best of any SVR title. Love the copyright at the end of every match. Royal Rumble minigames actually make the mode a whole new game!

CONS: Career Mode’s ladder structure can be tedious. Some controls still feel a bit stiff. While a personal matter, a majority of these characters I don’t even know.