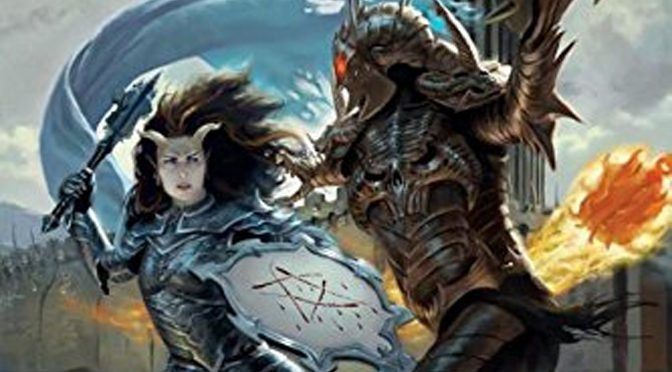 Westcrown, “City of Twilight,” is a Venice-like city with canals, decay and undead ghouls. It is also the setting for the latest Pathfinder novel, “Hellknight.” The role playing game Pathfinder keeps putting out morally complex fantasy novels that further explore and explain their gaming world Golarian. This is not a Tolkien or C.S. Lewis type of fantasy.

The central plot has very flawed characters fighting against power hungry despots. There are also many compromises the characters make to advance the worthy goal of stopping a string of murders and frustrating a power that is intent on ruling with an iron fist. In this story there are three main characters, two of which are woman cursed with an infernal birthright. The other is a noble of Westcrown who left the city many years ago on a crusade. 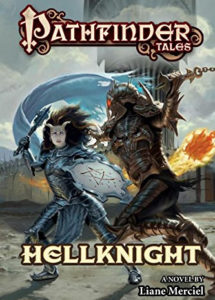 Jheraal is a woman who believes that justice and rules, starkly enforced with no prejudice, keeps civilization alive. She is descended from infernal beings that drive her investigation even more when she finds that the same people who killed Othando are targeting beings like herself.

This brings us to the last character, Sechel. Sechel also has infernal parentage but is ironically willing to make a devil’s bargain to become human. While Jheraal’s version of justice seems pessimistic yet pragmatic, Sechel is an assassin who puts her personal code ahead of any other consideration.

This murder leads Enderras to explore his own as well as his city’s tragic past. Edderas left Westcrown to go on a crusade after his lover betrayed him. Edderas had been part of a plot to overthrow the evil government that rules his city. His lover, the sorceress Velenne, pretended to be part of the plot but then turned him, and the others involved, over to the tyrannical government.

Enderras received clemency by virtue of his station and his self-imposed exile. Despite all this, he still feels attracted to rather sybaritic Velenne. Velenne herself finds Enderras and his high moral code attractive even if she disagrees with it. This opposites attract subplot gets lots of attention since Velenne holds the key to solving this mystery.

If you like the role-playing game Pathfinder, this is a diverting read and can give you ideas about creating your own adventures. It’s also a good book if you like fantasy novels with lots of twists and complex relationships. At its core this is a mystery with elements of intrigue, horror and a Lady Gaga style “Bad Romance.” If you prefer more straight ahead adventures with a clear quest and righteous protagonists, then this is not your type of book.