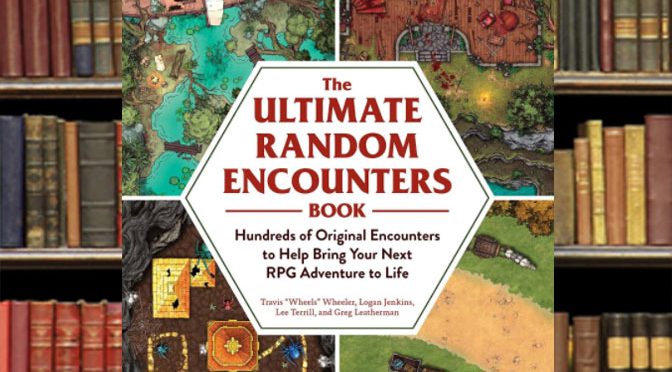 Random Encounters are an important way to get fresh enjoyment for a GM and their players without hours of campaign preparation and the possible rail-roading of your adventure into a rote exercise. This book grew out of an enjoyable podcast called “Very Random Encounters” where Travis “Wheels” Wheeler, Logan Jenkins, Lee Terrill and Greg Leatherman all use the randomizing elements of each tabletop RPG they play and even randomize things that aren’t.

This leads to some humorous outcomes but it also keeps the audience and the players on the podcast exploring unexpected results. If this sounds like elements of OSR (Old School Renaissance or Old School Revival) and Sly Flourish (author of The Lazy Dungeon Master) than you would be correct. This book is there to save the GM who can’t spend all week crafting the next session and the players who want the excitement of the unknown outcome. This book is weighted toward Fantasy RPGs but could be used for Sci-Fi or any other genre with a little imagination by the reader, and any reader of this book no doubt has imagination. 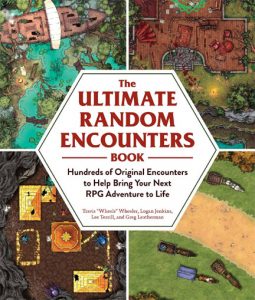 Many RPG books are detailed adventures a Game Master can run for their players and in most of these adventures the Random Encounter Tables offers the first of what Dungeon & Dragons designers call the Three Pillars of adventuring: Exploration, Social Interaction and Combat. A recent D&D video hosted by Brandy Camel with Satine Phoenix, Mark Hulmes & Griffin McElroy explores these Pillars and Random Encounters are pointed out in particular as being very important to all Three Pillars.

The book is divided into Encounters, Game Master Tools and Downtime. It also has a very usable index, something important that many RPG books don’t put enough time into. We’ve all read great RPG book only to find that when it comes time to find that important rule or bit of information the index lacks the details to find it. 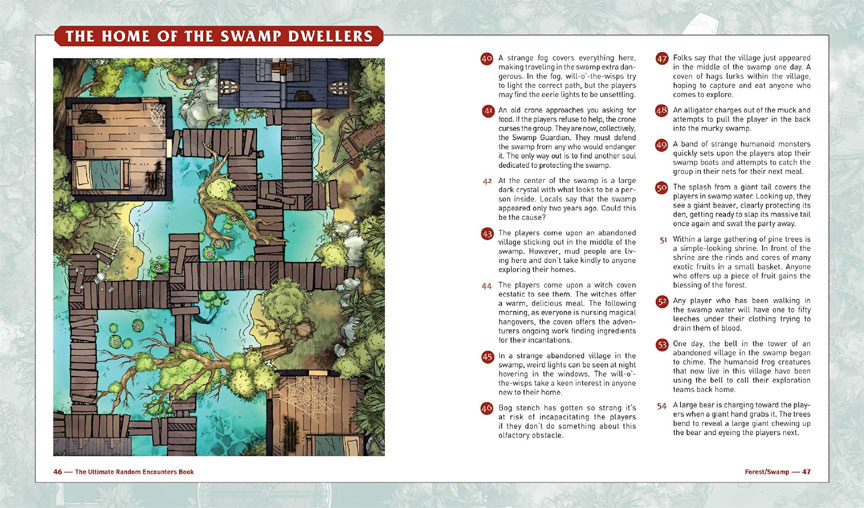 In Encounters, as you would expect the largest section, there are different environments like City, Village, Mountain, Sea, Desert, On the Road, Forest/Swamp, Underground Cave and of course Dungeon. Each entry comes with one-hundred different encounters and more than a few maps illustrating these encounters. 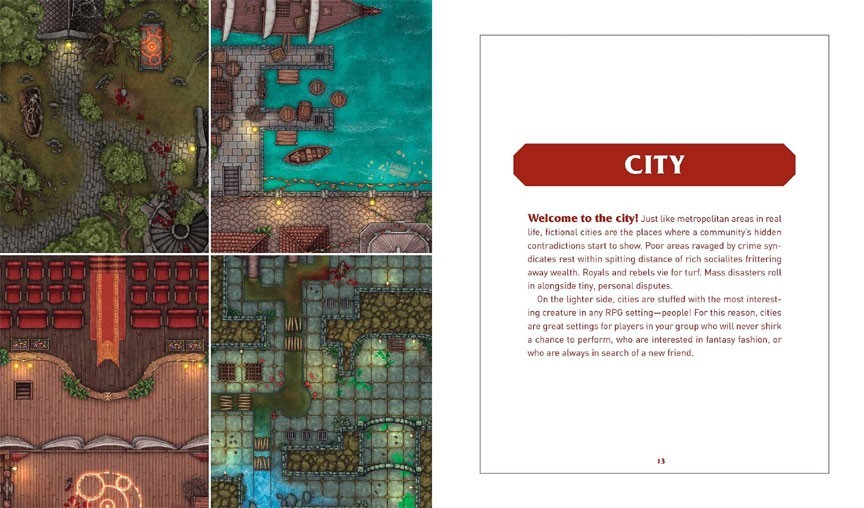 These maps and the art are very good and the books construction is sturdy and well laid out. The interior designer Julia Jacintho should be congratulated and the illustrators Cinthia Rashford, Rob Donovan and Pricilla Yuen commended. The entries, while good, would only be lists of text the eyes would tire on without their work. 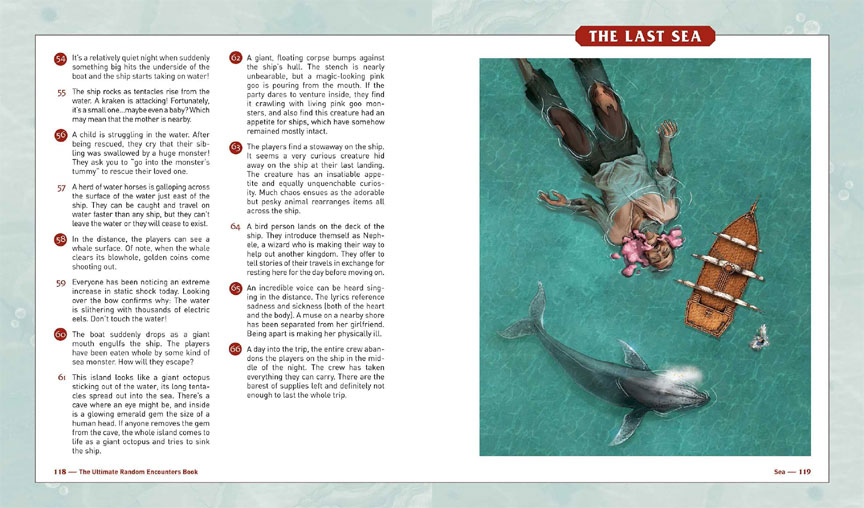 One such entry starts out, “The riverboat captain has been telling stories of the next stop for days. He speaks highly of this village’s food and people. His mood darkens when black smoke is seen on the horizon. The village has been attacked, and the captain urges the players to investigate.” 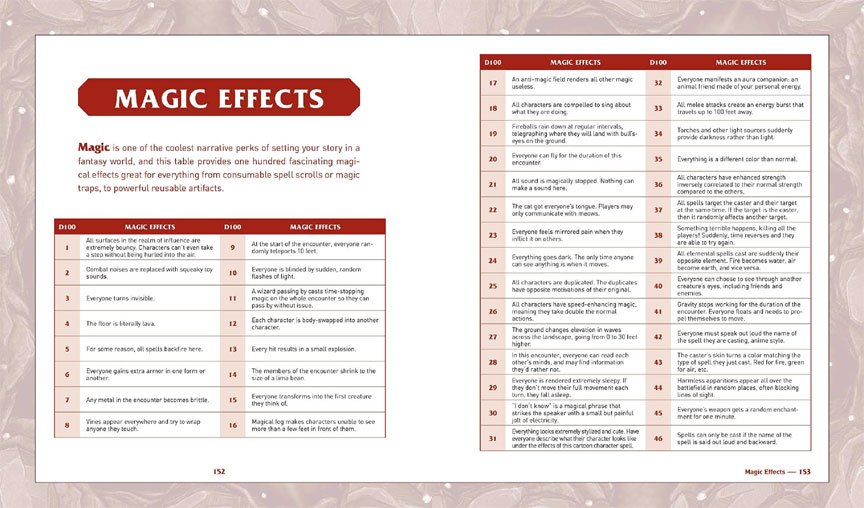 The Gamemaster Tools section is smaller but offers one-hundred entry tables on NPC Generation, Motivations, Magic Effects and the very extreme Wild Card. While the first four are self-explanatory the last table should only be used by a group of players that want something outlandish to happen and a GM that likes making up things on the fly. Just some of the entries could turn your game into a tragic character death or transport them to another world! 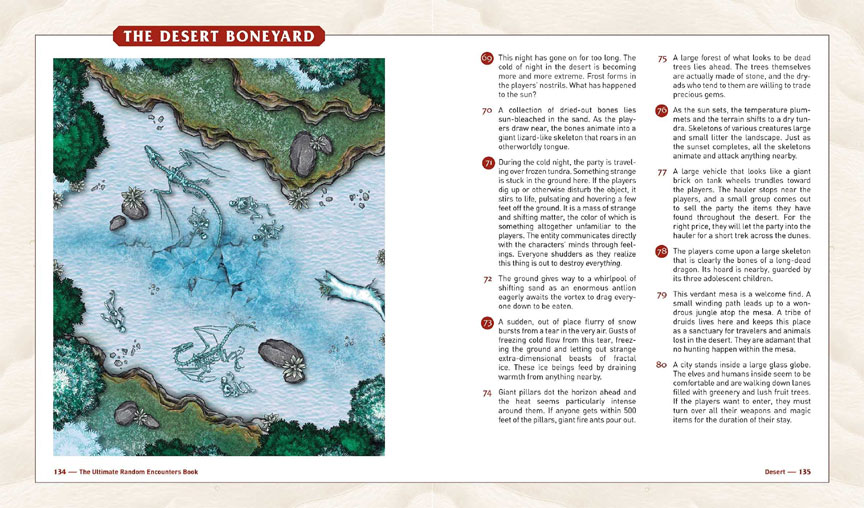 Whether you are watching Critical Role as Dungeon Master Matt Mercer rolls the Random Encounters for the Frozen Wastes in Eiselcross or rolling your own encounters down the Mississippi in Deadlands the random encounters can be lots of fun for you as a player or GM. It can even lead to new adventures that hadn’t been planned!

This is why “The Ultimate Random Encounters Book” is so delightful. This book can be used as is, plugged right into your adventure or pieces of it can be used to create a whole new adventure that takes shape as you play. This book is not just for GMs but for the player who want to give their GM a gift that will be beneficial to everyone who plays in their game.