Hi all. I’m back with an unusual review this week, because I already reviewed this particular graphic novel before, and wasn’t super excited with it, and said so, very bluntly.

That’s always been my warning to those who submit books to me, I’ll be honest and if the book I receive is wonderful, I’ll say so. However if it’s confusing or just too mysterious at first, I’ll say that as well. The latter was the case with Silvertongue Hernandez Volume 01 when I reviewed it over a year ago. 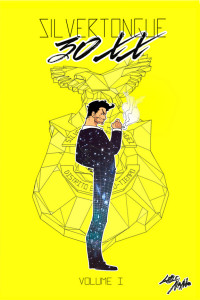 So I was totally thrown for a loop when the author contacted me telling me how much he appreciated such blunt feedback, and how he took it to heart. He redid a few pages of the first volume so that the driving force behind the main character was more obvious from the beginning, instead of being obscure. So now onto the review!

Plot: I’ve said that the driving force wasn’t clear before, but that isn’t the case now. I’m not saying we know everything that’s happened in the backstory, but we get why Hernandez does what he does enough to make him much more interesting. I won’t spoil anything, but I’m very pleased with how some small changes made this much easier to read, and get what’s going on.

Characters: While I had enjoyed the other parts of the main cast we met in that first part of the trial last year, I wasn’t happy with Hernandez himself. Now that we know a bit more about him upfront, and we get to meet even more of his ragtag team of co-workers I feel like this series has so much more potential than it initially did. I have a vested interest in why they do what they do, although I’ll admit that it’s still very confusing about whats going on some times.

Art: The one that hasn’t changed from my initial review is that I loved the art. Nando has someone draw this graphic novel, and in my initial review I didn’t know that. Granted at the time I was dealing with a cold that would affect me for over a month, but still I remember how much the art impressed me. It’s not Japanese manga, but it’s also not fully an American comic. It’s a mixture of both, and I still like it quite a bit.

Overall: This new edition of the first volume is so much better than what I received the first time, and it’s now definitely going to be on my watch list for the future. If you were like me and confused as hell the first time, give this series another chance and you’ll be pleasantly surprised.