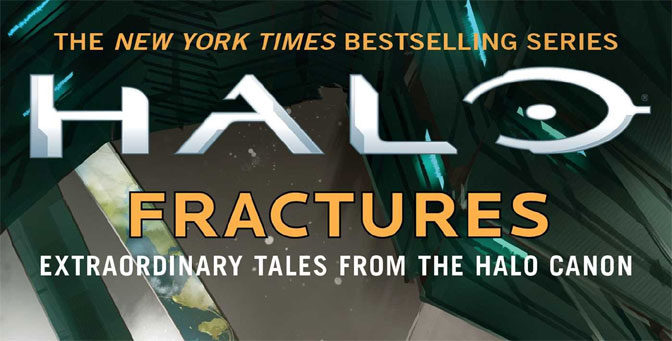 This collection of thirteen short stories in the shared Halo Universe makes for great reading. Some well known sci-fi authors including Troy Denning, Christie Golden, John Jackson Miller, Kelly Gay and Frank O’Conner share the book with writers who work for the Halo Franchise at 343 Industries. Set at different times in the Halo Saga, the stories offer snapshots of how Humanity, Sangheili and other Covenant races interact with each other while reacting to challenges of an intergalactic war. All the regular war fiction offerings of death, duty and shared sacrifice sit alongside the great science fiction question that arises from the Spartan initiative. How much can the human race change itself and still remain human?

Matt Forbeck, who wrote the New Blood novel about the Spartan IV Program, (see our review) sets his story right after Halo 3. It concerns winning the peace rather than just the war. We always hear about peacekeeping missions but do we understand their challenges? This story presents more than a few. 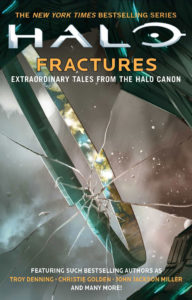 Morgan Lockhart’s story works its magic through dramatic irony. The reader knows what will happen following this post Halo 5 drama but will enjoy watching the characters arrive at it. The lesson of getting what you want can be troublesome indeed.

The story, “Promises to Keep” goes back to the days before the Halo games begin, in the mythical and mystical Forerunner history. Christie Golden’s poetic language is a welcome break from the combat driven, military space operas that make up much of the Halo fiction franchise.

The prolific Troy Denning doesn’t follow a strict military story either, but instead sets his firmly in the Office of Naval Intelligence. His ONI operatives deal in the politics of spy craft and the framing of information gathered by breaking the rules of warfare. Its no wonder his story is called, “A Necessary Truth”.

Frank O’Conner, the creative director for 343 Industries, has two offerings for this book. The first is an unusual rhyming and musical addition to this already ambitious mix. It’s a poem called “The Ballad of Hamish Beamish” and it reads like a spaced up version of “The Cremation of Sam McGee.” It also has an illustration that is very humorous and worthy of many a meme.

His second offering starts as a military tribunal and seems to belong in the court procedural genre but like good science fiction, it transforms into something more. I don’t want to give away too much but I do want to share one line. “We’re a beautiful moment of balance in gravity’s fight against entropy.”

It’s great lines like this and a great balance of different offerings that make this worth reading, even if you’re not a Halo fan. Check it out and let us know what you think in the comments below.