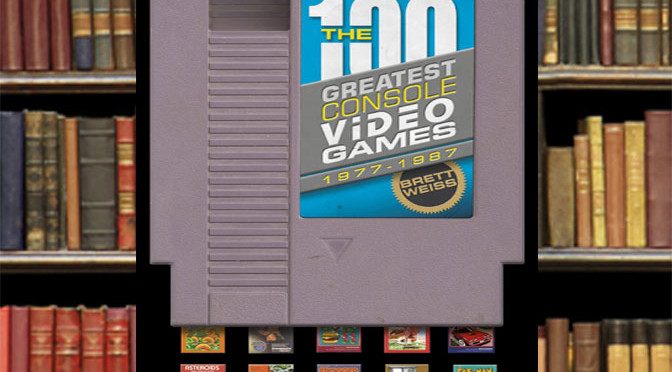 This artistically conceived coffee table book does not merely make Console Video Game controversies, it invites them! The title, “The 100 Greatest Console Video Games 1977-1987” is opinionated enough but the author, Brett Weiss, even states, “I hope my perceived oversight makes your blood boil.” Walter Day, the video game referee from the famous “King of Kong” movie, backs this up in the forward.  Day, a Guinness Book of World Record contributor and a Video Game writer proudly puts forth, “I believe that Brett’s books are like the lightning rod that attacks the storm.”

I can’t disagree, especially since the method Weiss chose to pick these 100 console video games is not based on statistics, sales or even a poll. It rests solely on his opinions, and what opinions he has! Battlezone and Gauntlet don’t even make the first hundred! I say first “hundred” because Weiss puts these two games in a second list of 100 he places at the end of the book.

And what a book it is! Full color and heavily bound the pages are themselves a revelation. They are slick, with an abundance of color photos (411) and flashy fonts. Made by Schiffer Publishing this volume evokes nostalgia by showing pictures of the old cardboard covers right alongside modern script.

The Legend of Zelda entry takes full advantage of that. Created in 1987, this game is given the royal treatment. It has a three page spread and shows three of the sequels. The reasons for its long run are enumerated and extolled, even, but not up to, embellishment.

The Fun Fact, placed at the end of every reviewed game, goes into why game designer Sigeru Miyamoto (also the creator of Donkey Kong, Super Mario Brothers) picked the name Zelda. Fun Fact shares this spot with another short blurb that sits at the end of the description, “Why It Made the List.”

In this review the reason Weiss gives is passionate. “Considered by retro gamers and modernists alike to be one of the greatest games of all time. The Legend of Zelda will forever hold a significant place in the annals of video game history.”

Another passionate description in the book is how to play Galaga. “Before you play the Atari 7800 version of Galaga, rip out the standard joystick for the system and throw it in the trash (your left thumb will thank you).”

This book is a conversation and controversy starter made for prominent display. There is no doubt it will get shakes of agreement and vocal protests from one colorful page to the next.