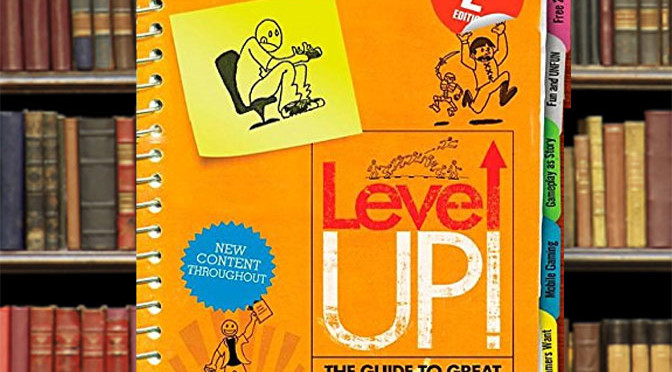 Level Up - The Guide to
Great Video Game Design

Almost everyone who plays video games thinks about making one. Fewer wonder about the process of how one is made. This book answers both questions. For those who really enjoy video games and want to see the process from a professional, this is the book. Scott Rogers helped design such well known games as Pac-Man World, the Maximo series, God of War and Darksiders.

The book is humorously divided into 18 “Levels.” The first few levels are concerned with a welcome to the world of gaming and its vocabulary, ideas, dealing with writer’s block, and writing the story behind the game. After this it gets more practical and deals with how to outline the game for a presentation.

Then comes Scott’s THREE Cs of game design: Character, Camera and Controls. Each one is given a long chapter, or in the parlance of the book, “level”. These three elements are a great way to look at game design but each one encompasses a mass of mechanics.

Character is more than what drives a video game persona. It embodies the size of the persona, the mechanics of how high a digital representation can jump and what type of shadow it casts. A high fantasy character may be able to jump twice their height and only cast a shadow in certain cut-scenes. A first person shooter may have to scramble over obstacles, have a sharp shadow in sunlight, and a flickering one in candlelight. It talks of weapons, companions, and non-player characters. It explores the way you can allow a player to create a character or how they can make choices that effect play.

Camera is also very complicated. It is how you see the world of your video game. Rogers goes out of the way to warn about Doom Induced Motion Sickness or DIMS. Named after the game that had so much motion it caused nausea. The reality of DIMS explains that too many camera choices makes for a frustrating rather than a freeing experience. It reads like cinematography and awakens the reader to some of the technical challenges of game design. The vocabulary alone of: scrolling, Mode 7, Isometric Camera, first person, third person, close up and Camera Angle is one that requires close reading.

The Controls “Level” for gamers gets into ergonomics, the stress injuries of “button mashing” and how to make your game hand friendly. It stresses that different ages of players require different sophistication of controls. It finishes up by tying the controls to the previous lesson on camera, since a shift of controls on the part of the player can often change the game’s camera view.

After Controls the book delves into mapping of levels and combat. Mapping is a huge subject and can require the readers to do some of their own amateur cartography to truly appreciate creating a world. Within mapping, Rogers uses the names of Dungeons and Dragon’s creators Gary Gygax and Dave Arneson for different “memorial mapping sections” to show the roots of present day games in this paper based role playing game. Rogers doesn’t engages in a lot of nostalgia when describing mapping though. He uses a great quote from BioShock’s creative designer Ken Levine that states, “The world is the best narrator.” He shows that all the mapping of both alley and island type games describe the games world better than any heavy-handed narration from an NPC.

Combat gets sticky and not just from the mechanics. Rogers brings up issues of violence and how perspective makes all the difference in a video game. He meets the problems of video game violence head on and even has one of his many stick figures standing on a soapbox as he delivers a short but stern lecture on the need to keep hyper violent games out of the hands of children.

The rest of the book ascends into some of the higher levels of game design. The most unexpected to me was Level 15 “Monetization.” This is how a developer tries to get the player to pony up additional cash after the initial purpose. Everything from DLC to the insidious “Reward Removal” is described. These economic incentives read as a game that is played against the interest of the consumer. It reminds me of a quote from Adam Smith, “People of the same trade seldom meet together, even for merriment and diversion, but the conversation ends in a conspiracy against the public, or in some contrivance to raise prices.”
Rogers does not shy away from pointing out that some of these monetization schemes are “shady.” He does not go out on a soapbox about this but points out examples of “coercive monetization.” He points out, for example, that the Candy Crush Saga has a difficult spike that requires a purchase to make it past a certain level. This is called “ramping.”

This is a book is for anyone who wants to be a serious student, creator or explainer of video games. It references other books when needed but stays very readable. There are parts that require rereading and memorization if you want to be truly conversant in the creative, costly and time consuming art and artifice of making video games. Check it out and let me know what you think in the comments below.