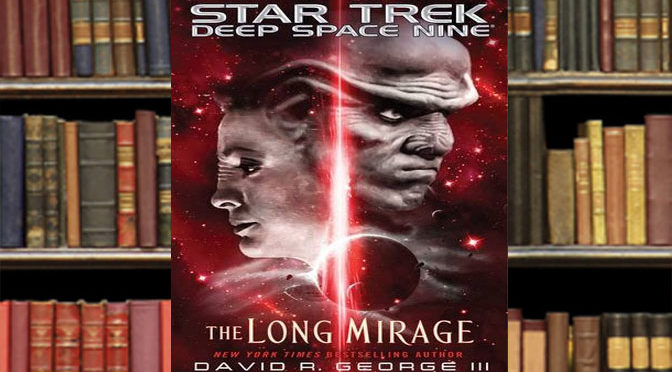 Getting into this long-overdue review, let’s get a few admissions out of the way. I love Deep Space Nine, and I recently completed a rewatch of the series. I similarly really loved the character of Ro Laren as she was introduced in The Next Generation. Both of these loves should have made reading The Long Mirage easier than it was. Admittedly, I have not read the previous installments in this series, so I did find myself thrown into these events in medias res.

The first hurdle for me is that Ro Laren is not only back in Starfleet but is in command of a reconstructed DS9. While I realize that Ro Laren was originally meant to serve on Deep Space Nine as first officer, Michelle Forbes turned down the role, leading to the creation of Kira Nerys; the reinstatement of Ro not only to Starfleet but as commander of the station seems to be backtracking a bit for her. She left Starfleet for the Maquis in the penultimate episode of The Next Generation as the culmination of a long arc featuring Ro’s search for a purpose and to accept her culture. Rejoining Starfleet feels to me to be a step back from that.

Additionally, Starfleet’s acceptance of Ro’s return is nonsensical. This is a character who has already received a second chance and used that chance to betray the organization. No matter how competent or useful she may be, I simply cannot accept that Starfleet would award her command. I realize that this may not have been a decision made by George and may even have been explained in the previous novels in the series, but for me, Ro’s status does color the rest of the book.

Other character changes include Kira’s ascension as a Vedek, which similarly strikes me as out of character. While her faith is a key element of who Kira is, I don’t know that she would take religious orders, no matter that the characters are several years older than they were in “What You Leave Behind.” Quark features prominently in the book but is less the bantering Ferengi bar-tender we remember and more someone going through a bad breakup. Nog is also an important part of the plot, and while I appreciate that George builds on the relationship between Nog and Vic Fontaine from “It’s Only A Paper Moon,” he seems to be more or less himself, if less interesting. 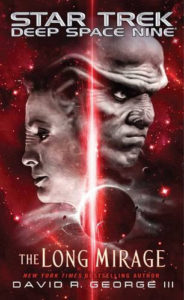 I do appreciate that The Long Mirage makes use of characters beyond those we have seen on screen. Tie-in fiction, much like the shows themselves, seems largely to ignore the richness of having an entire universe as a sandbox, leaving most of the heavy lifting to characters the audience has seen on screen. While that makes sense from a marketing perspective, as this is fiction meant to continue these characters’ stories for their fans’ enjoyment, the reliance on these characters hampers the freedom these works might otherwise enjoy. Original characters in The Long Mirage include a competent new Kai after the disastrous Winn Adami, the slightly less interesting John Candlewood, and the relentlessly bland Altek Dans who somehow manages to capture the hearts of both Kira Nerys and Ro Laren.

Ostensibly, these new characters, particularly Dans, are meant to serve the novel’s three plots. However, the plots themselves are less the focus of the writing and more somewhat ancillary. While Dans is central to the resolution of the Bajoran conflict involving the Endalla Falsework and the Prophets, ultimately, George fails to create any sort of realistic urgency to a religious conflict that allegedly has already begun sparking violence on Bajor. The focus is on Kira’s relationship to Dans, which is about as thrilling as watching paint dry. Nog’s plot drags Candlewood into the world of Bashir 62, to rescue a largely absent Vic Fontaine, and what should be a fun gangster story plods mercilessly toward its inevitable conclusion. The final plot features Ro and Quark seeking out Morn, and like the Dans plot, it suffers from too much time spent in the characters’ heads exploring their moribund relationship. In case you wondered, that is about as engaging as you might imagine.

Ultmately, The Long Mirage suffers from terrible pacing, too much focus on emotional drama, and lackluster world-building, all of which could be equally said of some of Deep Space Nine’s worst episodes. In that sense, the book is doubtlessly true to its source material, but unlike the show, even reaching the end, the magic handwaves that bring resolution to the plot are still unsatisfying. My recommendation is to give this one a hard pass.