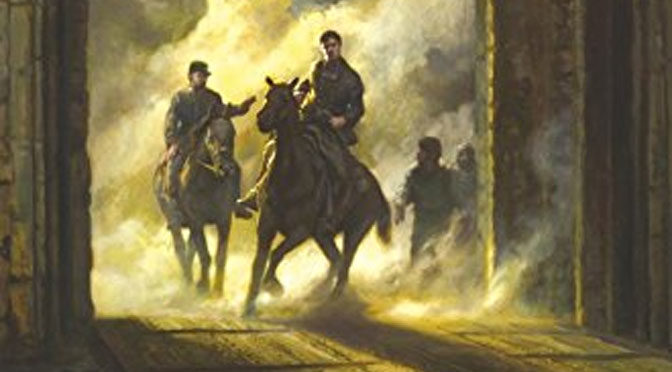 Hey all I’m back with a new series for me, although this book is the tenth in the series. It’s Treachery’s Tools, Book 10 in the Imager Portfolio series, by L. E. Modesitt!

Plot Synopsis: Alastar has settled into his role as the Maitre of the Collegium. Now married with a daughter, he would like nothing better than to focus his efforts on improving Imager Isle and making it more self-sufficient. However, the rise in fortune of the merchant classes in Solidar over the years does not sit well with the High Holders, who see the erosion of their long-enjoyed privileges. Bad harvests and worse weather spark acts of violence and murder. Once again, Alastar must maintain a careful political balance, but he cannot avoid the involvement of the Collegium when someone begins killing students. 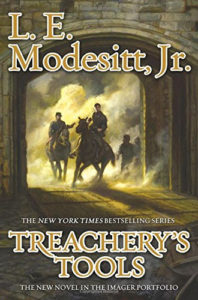 Plot: This is a decent book. Unfortunately for me and anyone who is like me, it’s the tenth in the series. So all those explanations of what exactly some of the terms mean aren’t present. I can piece together the meanings of the terms from context, but a lot of the value that characters place in some things don’t make a whole lot of sense for newcomers to the series. In fact that’s the big problem I have with the book, it’s not self-contained in terms of story. You can’t just take this and say look this is a perfect entry point into the series, it’s not. There are plot threads you pick up that are nearing conclusion, but you as the reader don’t have any of the background necessary to really understand the gravitas of said plot threads.

That isn’t to say this book is bad, it’s not, I’ve read much worse books. But this was definitely a poor entry point into a long-standing series. That said this book is full of political intrigue that seems to be the biggest portion of the story. It doesn’t make for amazing reading for those who prefer action over dialogue, but for those more mature readers it probably is okay.

Characters: Alastar seems like a pretty cool main character, but I feel like I’m missing large portions of his story, which makes sense since this is a sequel to a previous book that he was introduced in. That holds true for most characters, excepting newcomers like Alastar’s daughter Lystara who is probably the most relatable character for me.

Overall: If intrigue, mystery and politics along with fantasy is your cup of tea, Treachery’s Tools will prove a good book, but I advise that you read the 9 previous entries in the series before reading it. I know I regret not reading them prior to this.